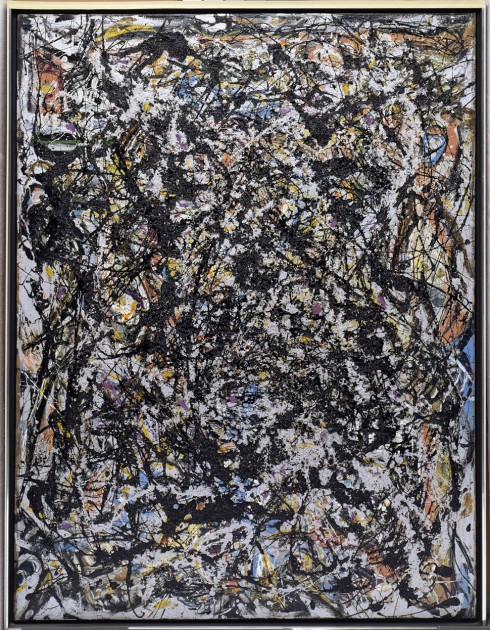 Tonight I learned an interesting connection between Chuck Close, Jackson Pollock, and the Seattle Art Museum. In a 2008 interview, Close explained that at an early age, he was influenced by Jackson Pollock’s drip paintings. Close said, “I went to the Seattle Art Museum with my mother for the first time when I was eleven. I saw this Jackson Pollock drip painting with aluminum paint, tar, gravel and all that stuff. I was absolutely outraged, disturbed. It was so far removed from what I thought art was. However, within two or three days, I was dripping paint all over my old paintings. In a way I’ve been chasing that experience ever since.”1

I can’t find an indication of which Jackson Pollock painting Chuck Close saw, but I think that there is a chance that it might have been Sea Change by Jackson Pollock (1947, shown above). This painting was acquired by the Seattle Art Museum in 1958, but previously it was exhibited in 1955 at the SAM in a show called “Contemporary Trends in International Art” (April 7 – May 1, 1955). Since there is some uncertainty as to Chuck Close’s exact age when he saw a Pollock painting in the Seattle Art Museum (see first footnote), I want to propose that Sea Change is a viable possibility for the painting that influenced Close so much, even though Close would have been almost fifteen years old at the time (not eleven).

When Chuck Close was eighteen, Sea Change (1947, shown above) entered the Seattle Art Museum’s permanent collection as a gift from Peggy Guggenheim. A fascinating side note: I found an fascinating transcript of the oral history of Edward B. Thomas, who used to work as a curator for the Seattle Art Museum. Thomas recounts his involvement in the museum’s acquisition of the painting Sea Change by Jackson Pollock. The painting was given to the museum as a gift from the art collector Peggy Guggenheim, under some very unusual circumstances. In essence, Edward Thomas was invited to dinner at Peggy Guggenheim’s palazzo in Venice, along with another dinner guest who appears to have been overbearing and rude. As a result, Peggy took a shine to the curator from Seattle, and at the end of the evening offered to let him select one of the Jackson Pollock paintings from her collection as a gift! Perhaps the Edward Thomas was drawn to selecting this Pollock, since it had just exhibited in Seattle a few years before? It seems likely to me.

Even if Sea Change wasn’t the painting that influenced Close as an adolescent, it is certain that Chuck Close would have seen this Pollock when it entered the museum collection. Close went to college in the Seattle area and even exhibited at a show for Northwest artists at the SAM in 1959.2

I feel like Jackson Pollock’s influence perhaps wasn’t keenly present in the middle of Close’s career, when he focused on creating hyperrealistic portraits like Mark (1978-79). However, I think in more recent decades the painterly quality of his portraits, which include swaths and swirls of color, could perhaps tap into Close’s early interest in Pollock: 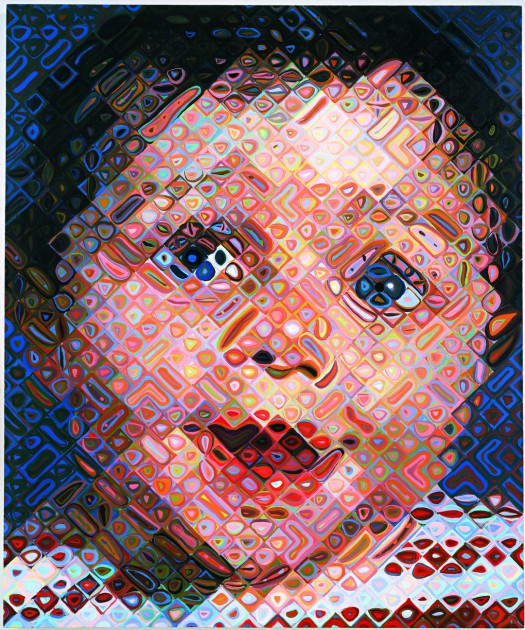 I’ve written elsewhere on this blog about Close’s change in style during his later years, which in some ways can relate to the fact that he is now bound to a wheelchair and suffers from a partially-mobile painting hand. And now, while considering Close’s interest in Jackson Pollock, I like to think that Close is somehow indirectly inspired by his predecessor’s “action painting” more than ever, despite his own recent limitations in physical mobility. Go Chuck!

1 Phong Bui, “Chuck Close with Phong Bui,” The Brooklyn Rail, July 7, 2008. Available online: http://brooklynrail.org/2008/06/art/chuck-close-with-phong-bui. Elsewhere, another online source indicates that Close was fourteen (not eleven) when he saw the Pollock paintings, whereas another biography indicates Close probably saw the Jackson Pollock in 1953 (when he was thirteen).