Elizabeth I and a Snake?

I’ve always liked royal portraits. It’s always fun to see how a monarch decides to visually assert his/her power, prestige, wisdom, wealth, etc. In portraiture, these attributes and characteristics of the sitter are emphasized through various signifiers (e.g. lavish, expensive clothing signifies that the wearer of the clothes is rich). What what if the signifier (or symbol) isn’t clear or easily understood?

That seems to be the case with this portrait by Elizabeth I (anonymous artist, 16th century, shown left). The final product of this painting showed Elizabeth I holding a bunch of roses in her hand. I haven’t seen what the painting looked like with roses (this Telegraph article described the roses as a “decorative” element), but it seems to me that roses could have also been been an easily identifiable symbol for Elizabeth I, since roses were a symbol of her family, the house of Tudor.1
But whether these roses were symbolic or decorative, they were obviously added at the last minute. Deterioration of this painting has revealed that the monarch originally was holding a snake in her hand. Based on the remaining visual evidence, an artist has recreated how the snake probably appeared in the original portrait (see below). It is thought that the snake was repainted with roses because of the “ambiguity” of the serpent symbol (again, see Telegraph article).

Well, “ambiguity” is right. The well-known symbolic associations with snakes are the Fall, sin, death, and Satan. And I’m pretty sure Elizabeth I wasn’t going for those associations. Once in a while you hear about snakes being associated with wisdom, so maybe that explains why the snake was originally included? Can you think of any other symbolic reasons why Elizabeth I would be depicted with a snake?

On another note, deterioration of this painting has also caused a strange ghostly appearance on Elizabeth I’s forehead. This portrait was painted over another unfinished portrait, and the eyes and nose of the previous woman face have become visible. It appears that the painter of Elizabeth I decided to reuse the unfinished panel, a common practice at the time.

Poor Elizabeth. As was suggested on The Corinthian Column, Elizabeth I doesn’t appear to have been the most attractive of monarchs. And having an extra nose and pair of eyes in your forehead is not going to improve your looks.2

1 You can see other portraits of Elizabeth I with Tudor roses, such as “The Pelican Portrait“ by Nicolas Hilliard (c. 1575-1580).

2 This Elizabeth I portrait is part of the National Portrait Gallery (London) collection. It has not been on display for almost a century, but will soon be exhibited as part of the show “Concealed and Revealed: The Changing Faces of Elizabeth I.” The show runs from March 13 to September 26.

Have you heard the story of how Thomas Jefferson was nearly killed by the artist John H. I. Browere? The elderly, retired statesman and ex-president was approached in 1825 by Browere, who asked to be allowed to take a life mask of Jefferson. Apparently, Browere was not very skillful; the plaster hardened too quickly, which impaired Jefferson’s breathing and ability to cry out for help. Luckily, Jefferson’s hand was resting on a nearby chair, and he was able to bang it on the floor to bring attention to his distress.

To make matters worse, Browere did not apply enough oil on Jefferson’s face, so the plaster stuck to the frail man’s face. Browere had to use a mallet and chisel to break the plaster off of Jefferson’s skin, and the ex-president reportedly groaned and even sobbed during the whole ordeal.1 When discussing the removal process, Jefferson wrote in a letter that “there became a real danger that [my] ears would separate from [my] head sooner than from the plaster.”2

Poor man. It’s no wonder that Jefferson wrote in the same letter, “I now bid adieu for ever to busts and even portraits.”3

The above photograph of this infamous life mask was taken in 1939 by LIFE photographer Bernard Hoffman. Jefferson’s expression doesn’t look to happy – and can you blame him? The man couldn’t breathe!

Understandably, Browere didn’t have the greatest reputation. He was called an “itinerant sculptor” by Dumas Malone and a “vile plaisterer” by Jefferson’s granddaughter.4 Artists in the American Academy (i.e. Trumbull) and National Academy were opposed to Bowere, too.5 It seems, though, that the ambitious writer Charles Henry Hart was able to overlook all of Bowere’s faults. In 1899 Hart published a thorough examination of Bowere’s life casts in a book, and he even went as far as to call Bowere an “ingenious” man.6 (No doubt such a statement reflected well on Hart, who credited himself with rediscovering the artist.) Hmph.

Granted, I do think it is really fun to see life casts of so many prominent members from American history. In that aspect, I’m appreciative of what Bowere did. (If you are interested, you should look at some of the life casts in Hart’s book, found online here). As an artist, though, Bowere definitely was lacking in skill. After all, he almost killed one of the Founding Fathers through his incompetence.

Let’s end this post with a more pleasant portrait of Jefferson, shall we? At least Jefferson appears to breathe freely in this bust: 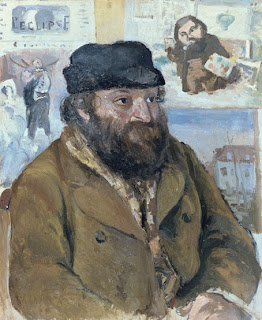 I just stumbled across this portrait of Cezanne. I’d never seen a portrait of the Cezanne before, but it makes me happy that Pissarro depicted his friend in a bulky, geometric fashion. Actually, it appears that Cezanne was a large-ish man (at least at some point in his life), as evidenced by this self-portrait (c. 1873-1876), this one (c. 1875).*

I like the thought that this bulkier, full-bearded man is reflected in the geometric, bulky art forms that he created. It’s almost like Cezanne’s geometric forms (like this Mont Saint-Victoire from 1900) are portraits of the artist himself. Ha! I find that kind of cute.

*It appears that Cezanne varied in his physical bulk and size – he appears smaller in this photograph (c. 1861, when Cezanne was about 22 years old) and his face appears quite thin in this self-portrait (c. 1898-1900, when the artist was about 60 years old). 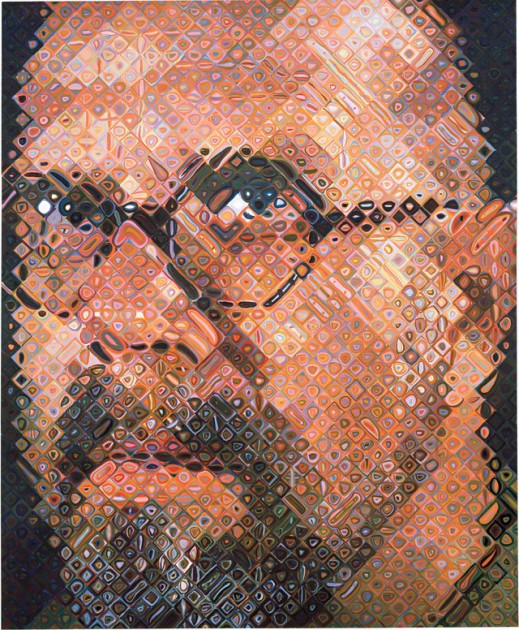