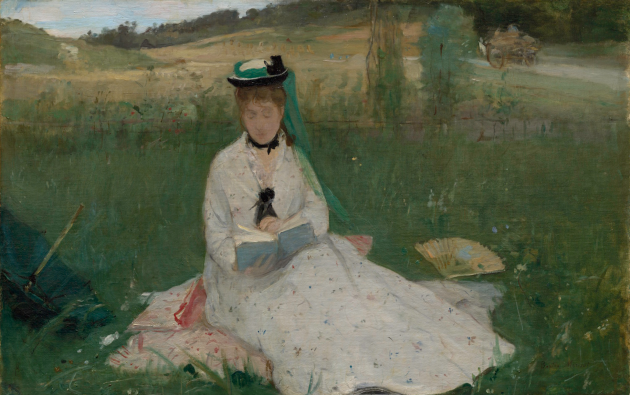 The post that you are reading is a very different one than the first one that I originally wrote this evening. I recently read in The Art of Reading: An Illustrated History of Books in Paint that Berthe Morisot was the descendant of the painter Jean-Honore Fragonard, and I hoped to write a post that explored that relationship between the two. However, as I researched, I found conflicting information about how Morisot was either the granddaughter of Fragonard, the great-niece of Fragonard, or the great-great-niece of Fragonard. So I began to comb through the genealogical timelines of the Morisot family and realized that I couldn’t find a clear ancestral connection between the artists at all. Dozens of sources claim that this connection comes through the family of Berthe’s mother, who was named Marie-Joséphine-Cornélie Thomas, although as of yet I can’t find the origin of this claim in writing. I can assert though, that Morisot is not the granddaughter of Fragonard: her paternal grandparents were Tiburce Pierre Morisot and Claude Elisabeth Morisot; her maternal grandparents were Jean Simon Joseph Thomas and Caroline Françoise Marie Mayniel.

Chronologically, it seems to be that Fragonard lived four generations before Morisot. Her only two great-grandparents that I know of (her grandmother’s parents, whose names were Jean Henri Mayniel and Josephine Anne Victoire de Ménard) were both born in 1760. That doesn’t go back far enough to meet up with Fragonard, who was born in 1732. Other branches of Berthe Morisot’s family line don’t seem to go back far enough, at least through online genealogical records. I finally found an archived excerpt of  Anne Higgonet’s 1995 book Berthe Morisot, which explains that “family tradition claims indirect descent from the painter Fragonard.” Is this actually just a “family tradition” then, but an unsubstantiated one? If that’s the case, we need to stop repeating it in scholarship or take Higgonet’s approach to explain the relationship has just been merely “claimed” or rumored through family tradition.

I can see how it is appealing to connect these two artists together. Fragonard painted many outdoor scenes that depicted aristocrats engaged in romantic or pleasurable pursuits. Likewise, Morisot painted plein air and often depicted members of the bourgeoisie. I also like thinking about how they both were drawn to the subject matter of a woman reading: Fragonard’s Woman Reading (c. 1776, shown below) was made almost exactly one hundred years before Morisot’s Reading (The Green Umbrella) from 1873 (shown above). It is also clear to see how Fragonard’s lively brushwork (especially seen in the fabric of the painting) helps to open the door for the loose, painterly strokes of the Impressionists like Morisot. 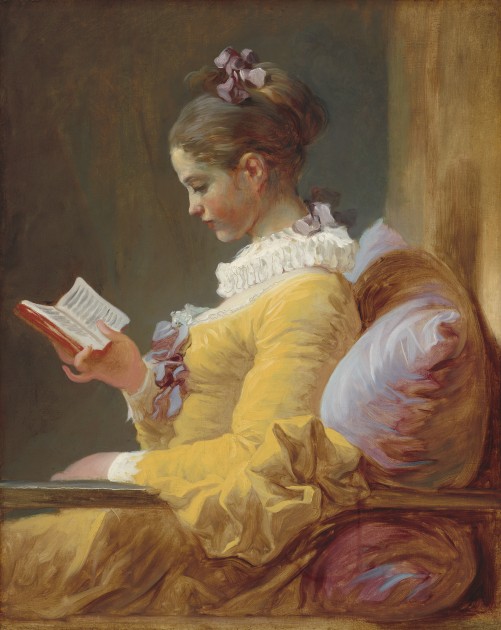 One thing is certain: if Morisot was a descendant of Fragonard, she never met the artist. Fragonard died in 1806 and Morisot was born in 1841. The one thing that makes the ancestral connection believable in some regard is that Fragonard’s reputation and career fell into a decline during the end of his lifetime due to the upheaval of the French Revolution.1 He even remained relatively unknown for the first half of the 19th century and was even omitted from scholarship.2 So he would have seemed like an odd choice to claim kinship in the 19th century, unless the kinship either was actual or derived from family lore that began in the 18th century!

If you can fill in the genealogical record or add to the connection (or lack thereof) between Fragonard and Morisot, please share! I’m also curious to learn how this “family tradition” has been upheld in scholarship – who was the first to pen down this connection? Was it Berthe Morisot herself or it is in an Impressionist review? So far the earliest mention I have found is from 1904.

Regardless of the ancestral connection, I am particularly struck at how often this connection has been repeated in scholarship and publications. On one hand, it is a neat connection if it is true, simply to show how art was a familial pursuit. But I also wonder if this connection to Fragonard was also used to legitimize the contributions of a female artist in the male-dominated world of art.