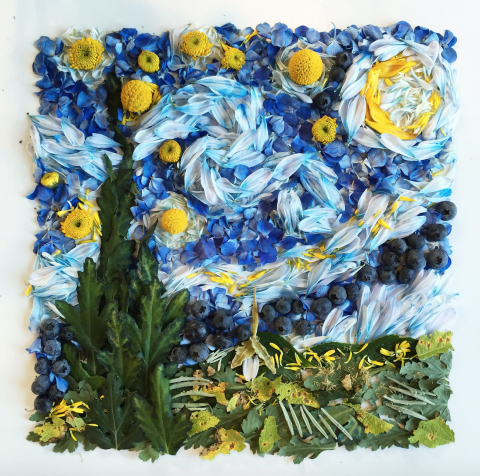 Last week I had the opportunity to interview Bridget Beth Collins, a Seattle-based artist who creates gorgeous collages out of flowers, leaves, and other botanical items like pinecones, mushrooms, fruit and seeds. Collins works under the pseudonym of “Flora Forager” since her collages often consist of botanical elements found in her garden or the green areas surrounding her Seattle-based home. Just last month, her book The Art of Flora Forager was released, and it is such a delight to see and read! I really am thrilled about this book. Similarly, it was a real pleasure for me to meet Bridget in person, since I automatically feel a true affinity with people who love flowers, juvenile fantasy fiction, and (as I discovered in the course of our conversation) old murder mystery television series.

Ever since I became familiar with Flora Forager’s work on Instagram earlier this year, I’ve been charmed with her creative subject matter, the novelty of her compositions, and also her unusual choice of medium. Flora Forager’s whimsical collages depict things like animals, insects, woodland fantasy scenes, mandalas, star constellations, portraits of iconic women, and even copies of famous masterpieces. In concept, her collages might remind one of colonial feather paintings or even Grace Kelly’s pressed flower collages. However, in the course of my conversation with Bridget, it became apparent that her work is very different from Grace Kelly’s flowers, even if sometimes their compositions are loosely similar (compare Grace Kelly’s geometric patterns with one of Flora Forager’s mandalas). 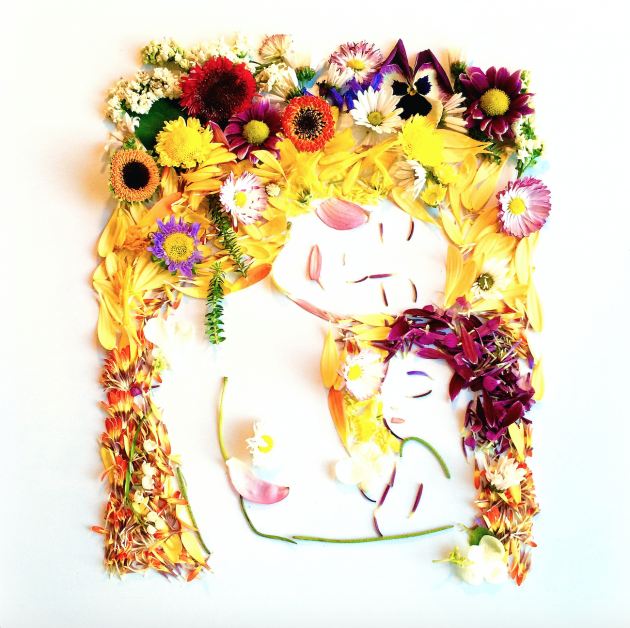 In contrast to Grace Kelly, Bridget does not like to work with dried or pressed flowers. As we spoke, it was apparent that the three-dimensional quality of the fresh flowers is important to her. She wants to her flowers to have bulk and form as they are layered and arranged, to the point that she is mindful of the shadows that are created: she consistently photographs her work from the same location on her white dining room table, so that all of the shadows fall to the left.1 She also wants to make sure that the shadows are soft and comely, and she commented that the cloudy skies of Seattle create perfect lighting for the effect she wants to capture.2

This interest in softly modeled three-dimensional collages is really revealing to me, because I think it helps to explain why Flora Forager’s representational collages are so delightful and impactful: the three-dimensional forms and fresh flowers create a sense of plausibility and give a lively presence to something that might not actually exist in reality. For example, a three-dimensional rendering makes a fantasy scene (such as this one or this one) seem more palpable, and therefore endearing, to an escapist viewer. Such fantastic escapes and whimsical storybook tales are just within reach! And not only are they rendered possible because the collages are three-dimensional, but they are created with found objects that are easily identifiable and readily found to the viewer. In a sense, her art suggests that fantasy is embedded within the everyday world around us. 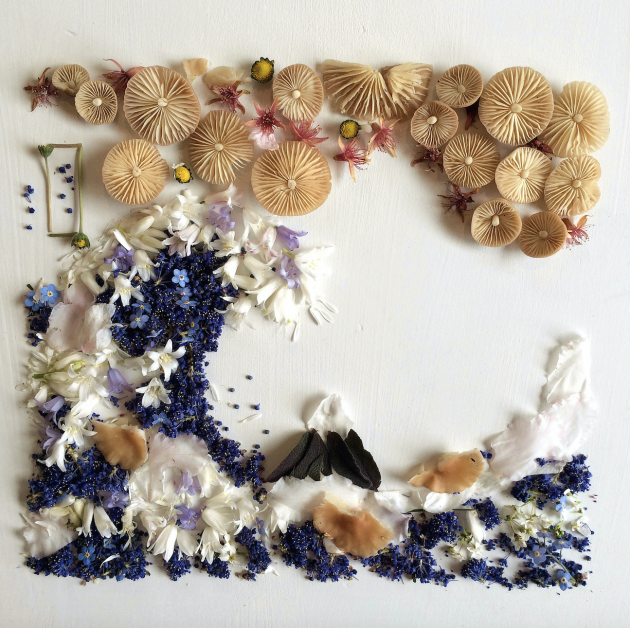 In a related way, I think that the three-dimensional fresh flowers also affect the way that the viewer reacts to Flora Forager’s copies of famous masterpieces or portraits of iconic women (like Audrey Hepburn or Marilyn Monroe). On one hand, the three-dimensional forms and botanical media give an iconic image or iconic person a new sense of presence and life: we can look at familiar objects or faces in a new way. But I think that the fresh flowers also help to reinforce the iconic, timeless status of these familiar objects too. When flowers and leaves are captured as fresh and pristine in a photograph, these natural elements become immortalized in the same way that iconic images have been cemented in their well-known celebrity status. As a result, we have timeless flowers that won’t fade, similar to iconic images that don’t dissipate from cultural memory. 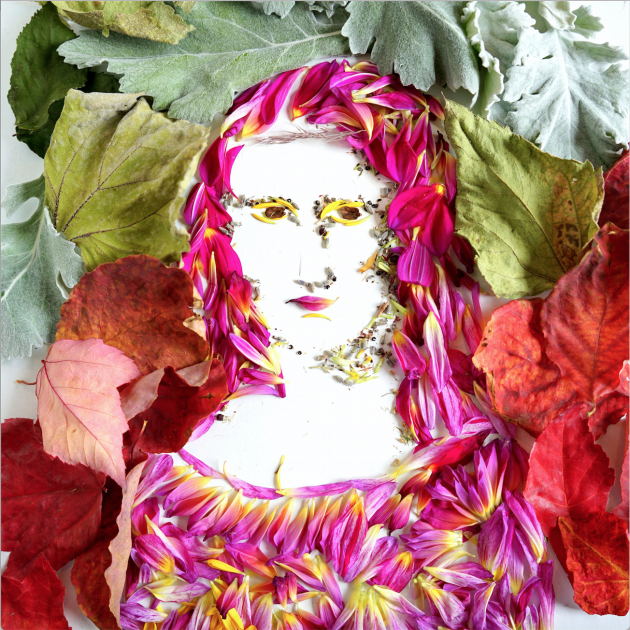 I’m reminded of a quote contrasting long-lasting, iconic works of art to flowers:

“Works of art often last forever, or nearly so. But exhibitions themselves, especially gallery exhibitions, are like flowers; they bloom and then they die, then exist only as memories, or pressed in magazines and books.” – Jerry Saltz, New York Magazine

What Flora Forager does so well is belie the inevitable death of nature: her camera captures flowers and leaves while they are fresh and vibrant, and uses that vibrancy to her advantage to reinforce that an iconic work of art can “last forever” or that a famous celebrity is, indeed, immortal. 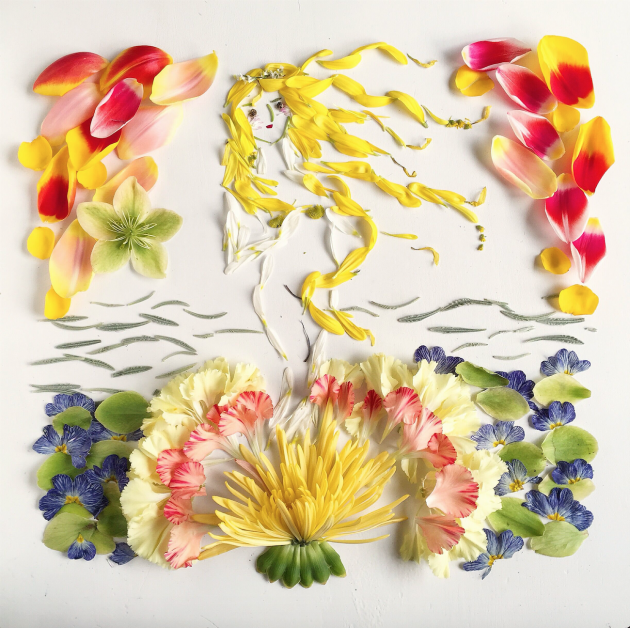 For anyone who is interested, please follow Flora Forager on Instagram and see her print shop. In addition to The Art of Flora Forager book, Bridget Beth Collins has also created Flora Forager: A Seasonal Journal Collected from Nature. She anticipates the publication of another journal titled Metamorphosis in 2018.