For those of you who follow me on Twitter, you may have noticed my burst of activity when I began to live-tweet while attending sessions at CAA (and that THATCamp session which preceded the conference). There are a lot of things that I learned and explored during the conference, and I particularly liked contributing to the Art History Flashbook that was created during one THATCamp session. Another highlight of the conference was getting to meet several art history bloggers for lunch. It was fun to meet Ben, Frank, and Sedef in person. 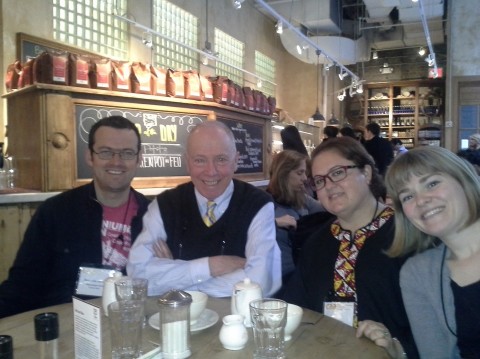 My notes from each conference session are very extensive, and I don’t think I want to hash them out in this forum right now. But I do want to highlight a few of the talks which really stood out to me. These talks were particularly interesting, especially because of the course which I am teaching on Counter-Reformation art. In fact, I discussed several ideas from the conference with my students this afternoon. 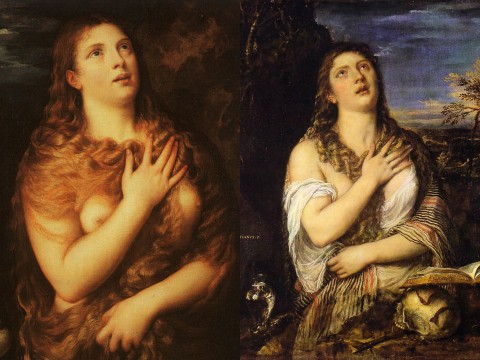 I really enjoyed Charlene Villaseñor Black’s talk, “Sacred Tranformations, Indigenous Influences: Mary Magdalene and Other Case Studies in Colonial Art.” Black discussed the treatment of Mary Magdalene in relation to the Counter-Reformation, and brought in some European examples (such as the two depictions of the Penitent Magdalene by Titian shown above, which evidence how Titian moved away from the problematic exposed-breast iconography after the Council of Trent stipulated conditions for religious art in 1563).

Black discussed how colonial artists did not quickly respond to the censorship of the Council of Trent and argued that Juan Correa’s Mary Magdalene (c. 1680) is similarly erotic, even though the figure is clothed. She mentions how the reclining posture of the Magdalene can reference the her previous life as a prostitute. Additionally, images of the Magdalene outdoors (in the wilderness) can even recall her past as a prostitute, since outdoor scenes have associations with Venus and love-making. Overall, Black wonders if indigenous attitudes toward sexuality and prostitution may have affected the way that the Magdalene was represented in Spanish America. 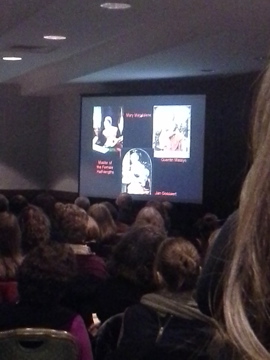 My view of Penny Howell Jolly's talk from the hall. I took this picture so that I could remember paintings by Master of the Female Half-Lengths, Quentin Massys, and Jan Gossaert.

Speaking of the Magdalene, I also really enjoyed a talk by Penny Howell Jolly, “Experiencing the Magdalene: Seeing, Smelling, and Hearing Salvation in Northern Devotional Art.” This session was extremely full, and I only got to hear this presentation from the hallway. I remember that she spoke about sexual associations with the lute in Northern art. She discussed that when the Magdalene is depicted with a lute, this could suggest that she is love-sick for her symbolic lover, Christ himself. She also discussed how the jar (part of the Magdalene’s iconography) can have associations with perfume and the perfumed luxury offered by the Magdalene as a prostitute. 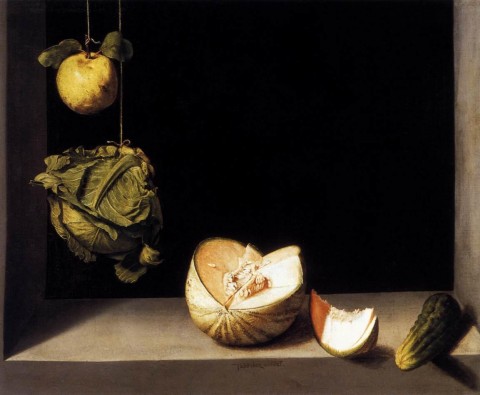 I also enjoyed Martina Phleger Hesser’s talk, “Juan Sánchez Cotán’s San Diego Still Life Painting as Vehicle for Gender Transformation.” Hesser discussed how Cotán painted this still life perhaps right before he entered a Carthusian monastery. She discussed the many sexual associations with the fruits and vegetables in this painting, including how the cabbage plays a role in sexual gratification since layers are peeled away and removed (just like clothing). As a result, the upward, parabolic composition could indicate the sexual struggles that a monk must overcome in order to elevate to a higher, more divine realm.

Hesser also discusses how monks have to create a new gender for themselves that is neither male nor female, since they enter a monastic community and leave sexual desires behind. Additionally, members of a monastic community enter a mystical marriage with God, which therefore sets them apart from both men and women in the outside world. I thought that this idea of gender was particularly interesting, especially since the Carthusian monastery to which Cotán belonged practiced vegetarianism. Since these monks have given up the arguably “masculine” practice of meat consumption, I think the vegetarianism could be another manifestation of how these men have created a new gender identity for themselves. Cotán’s still life paintings are evidence of this vegetarian practice (and gender identity) in many respects, although I have noticed that game fowl is depicted in some of his still lifes (see Still Life with Game Fowl, Vegetables and Fruits (c. 1602)). It is an interesting angle to consider, though, and I’d like to explore this topic further in the future.

Did you attend CAA? What conference talks stood out to you?