I suppose this isn’t really a full fleshed-out post, but more of a post-it note. I received an email this week from Francisco Julius, who works as a guide in Rome. He wrote to me in response to my previous post “Ancient Egyptians and Greeks: Left-Foot Forward!”, which explores Egyptian and Greek sculptures of figures who are depicted in a particular stance with their left foot forward. Francisco brought two interesting Roman examples to my attention, which are located today in the Sala a Croce Greca of the Pio Clementino Museum of the Vatican. 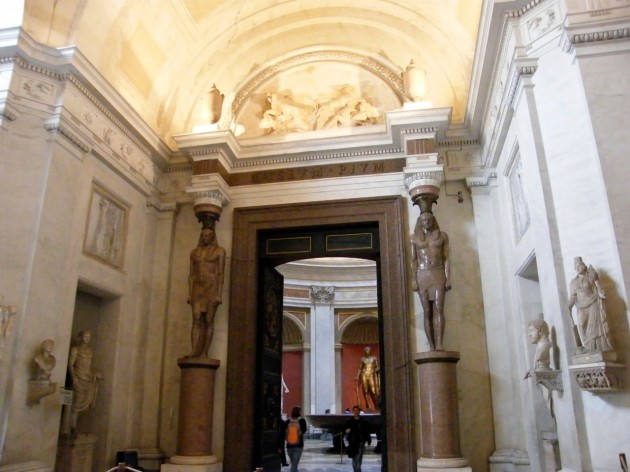 The two telemon (structural supports in the shape of a man) in this room were originally located at Hadrian’s Villa (Villa Adriana) at a sanctuary dedicated to Antinous. Antinous was the Emperor Hadrian’s homosexual lover; he tragically drowned in the Nile when he was a young man. Hadrian encouraged a cult-like following of Antinous, and the sanctuary to Antinous (called the Antinoeion) at Hadrian’s Villa is just one of many structures, monuments, and sculptures that Hadrian built to honor Antinous.

On one hand, this switch from convention is a bit surprising to me, considering how much Hadrian loved Greek culture. But, I guess Hadrian was really a Roman at heart, since he didn’t mind having this slight departure from the Greek tradition!

On a side note, it appears that this right-footed telemon was painted by Raphael in the Room of Fire (la Stanza dell’incendio) in the Vatican. The telemon appears in the corner of the room. At the time Raphael created this fresco, the two telemons were located in Tivoli at the Palazzo Vescovile (Episcopal Palace). Now I’m led to wonder whether Renaissance artists were aware of this left-foot-forward tradition! Could Raphael have been aware that he was painting an example which departed from ancient convention?