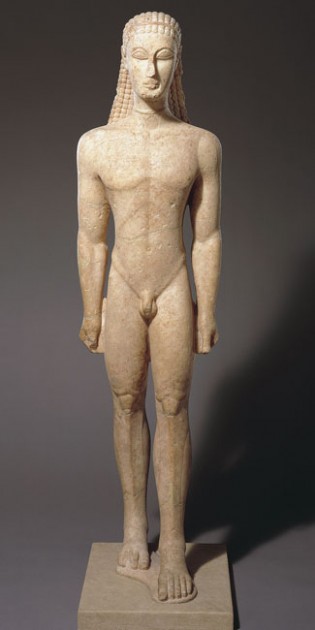 Last fall, when I taught about the Archaic Period in ancient Greece, a student pointed out that many of the kouroi figures were standing with their left foot forward. We discussed how Egyptian figures often are striding forward with their left foot as well, and perhaps the Greeks simply adopted this composition due to compositional balance. But my student pressed, “But why the left foot? Was the left foot itself important for some type of reason?” 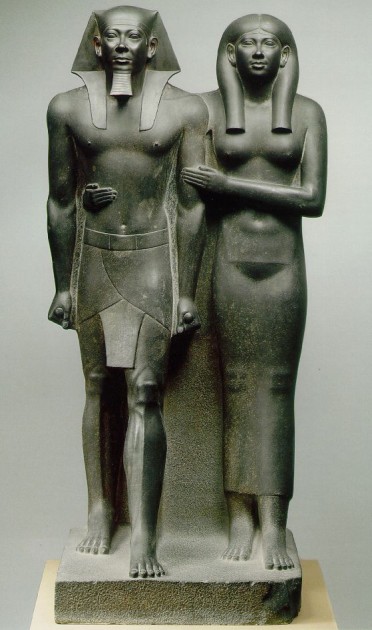 I have puzzled over this student’s question for several months, particularly as to whether there is significance with the advancing left foot in Egyptian culture, and whether that same type of significance would have carried into Greek culture. We can see that a large number of Egyptian statues, including male and female figures, adopted the “left foot forward” stance; Menkaure and his Queen (shown above), the colossal statue of Queen Tuya (Vatican Museum), Karomama (Louvre), and wooden tomb statue of Tjeti (British Museum) are just a few of the many examples that exist. Some sources argue that Egyptian females are typically represented with both feet together, but I am increasingly wary of that generalization.1

Did the left foot hold special significance for the Egyptians, since this convention appears throughout ancient Egyptian history? I haven’t come to a conclusive answer by any means, but I have come across a few ideas. One idea was presented to me through Twitter: Ma Magdalena Ziegler (@ZiZiChan) wrote to me that for the Egyptians, the “left side is where the heart resides & it’s the house of will, emotions & consciousness, the center of life itself.” A similar idea was presented in an online forum on Egypt, where writer Al Waze-look King wrote, “The real meaning behind the position of the statue [with the advancing left leg] is esoteric. The left side of your body is where the heart is. The Egyptians believed you stepped with the left foot to trod out evil so the heart could proceed.” Another online forum (which actually is dedicated to Freemasons) claims that the left foot is represent the power of Isis, a fertility goddess who is associated with life and new beginnings. Another possibility shared by a tour guide in Egypt is that the left foot forward could suggest that the figure represented in the work of art had been involved in the military.2

Apart from these online exchanges, I haven’t come across any published scholarship to support these ideas, let alone any direct historical document that connects this idea to Egyptian sculpture itself. (If anyone knows of scholarship that supports these ideas or presents an alternative view, please let me know!) Regardless, though, I do think that the question of the left foot needs to be taken further when it comes to Egyptian influence on archaic Greek sculpture. The connection between Egyptian sculpture and ancient kouroi/korai has long been established by scholars.3 Scholars even argue that some kouroi (specifically the Metropolitan Kouros, shown at the top of this post) was based off of the Egyptian canon of proportions.4 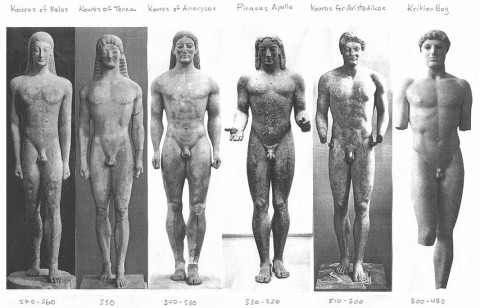 Kouroi examples, culminating with the Kritios Boy from the Early Classical period. Note that the “Piraeus Apollo” is a “transitional sculpture” that is different from the others, since his right foot advancing.

But did the ancient Greeks adopt the “left foot forward” stance for similar reasons as the Egyptians, if Egyptians had symbolic reasoning in the first place? Unsurprisingly, I suppose, I haven’t found a conclusive answer either. If anything, the evidence that I found is contradictory to my Egyptian ideas and a little bit too late historically to coincide with many of the archaic kouroi: Aristotle (writing in the Late Classical period), wrote that the right side of the body was the naturally stronger and more active than the left!5

Archaeologist and art historian Gisela Richter, who published technical analyses on the kouroi and korai, notes the tradition of the advancing left foot in several types of kouroi and korai.6 However, Richter is quite silent as to the reasoning of compositional stance, only suggest that an evolving interest in naturalism and the artist’s desire to suggest “the asymmetry of the two sides of the figure” led to the forward placement of the left leg.7 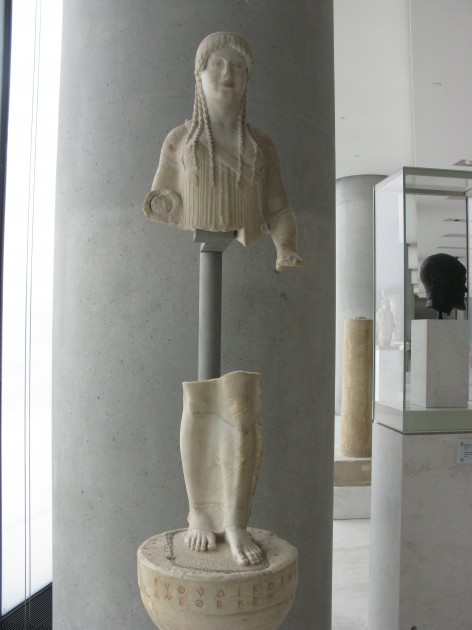 When I started to write this post, I hoped to come up with specific ideas and reasons behind the leg positions of the kouroi and korai. Instead, I hope this post will serve more as a forum and generator of ideas as to the stances of these statues. If you have any ideas as to why left leg was positioned as advancing in either Egyptian or Greek sculpture, please share! 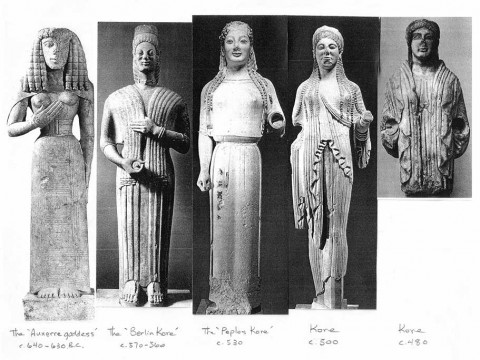 Korai examples, ranging from c. 640 BCE to c. 480 BCE. Several of these korai have their feet placed close together. The exception is the c. 500 BCE kore, who has an advancing left leg

I also may also never find a reason as to why some korai are depicted with their legs together (see above). Is there an “active male” vs. “passive female” being expressed through some of these works of art? I’d love to learn what others think on this topic, too.