“Oath of the Horatii” and the Nazi Salute 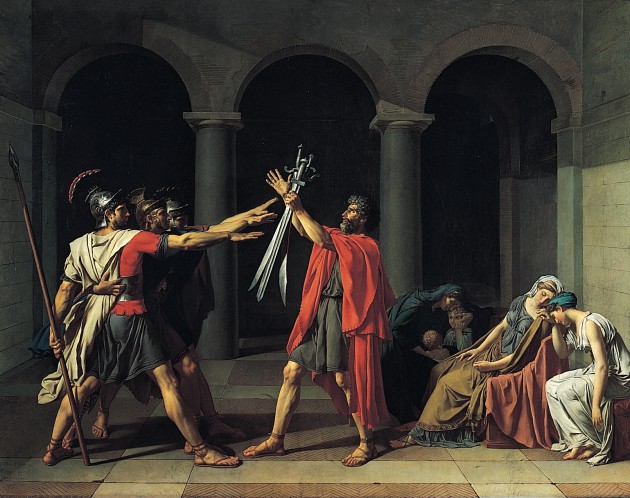 Today was one of those days in which a student points out something so obvious, that I’m shocked that I’ve never considered it before. I think sometimes my eye is so trained to look for certain visual details, that I need a new pair of eyes to help me look at familiar paintings in a more objective way. That was the case today: when discussing the Oath of the Horatii in class, a student raised her hand and simply asked why the brothers have their hands raised in a gesture that looks like the Nazi salute. And now after looking at the painting, I’m embarrassed as to why I never really entertained that thought before.

Luckily, other historians have already made this connection. In 1987 Albert Boime wrote about how “the brothers stretch out their arms in a salute that has since become associated with tyranny. The “hail Caesar” of antiquity [although at the time of the Horatii a Caesar had yet to be born] was transformed into the “Heil Hitler” of the modern period. The fraternal intimacy brought about by the Horatii’s dedication to absolute principles of victory or death [and the resultant] emphasis on the destruction of all intermediate loyalties between citizen and state, and on the absolute sovereignty of state power, is closely related to the establishment of the fraternal order.”1

Furthermore, in 2009, Martin M. Winkler published a book called The Roman Salute: Cinema, History, Ideology (.pdf available online). Winkler finds that David’s painting served as the foundation point for what early 20th-century fascist governments called the “Roman salute” – even though there is no evidence that the Romans actually existed.2 (For more information, see this article on the history of the Nazi salute.)

It’s interesting to me that David’s painting would have these changing political meanings over the centuries, long after David had died. In some ways, this change in political associations is in line with David’s own career: he often would cater to whatever political group or leader was in power. As a result, David was associated with French Revolutionaries (including Robespierre during the Reign of Terror) earlier in his career, and then about a decade later, became the First Painter to Napoleon. In an unexpected way, the fluctuating political associations with the “Oath of the Horatii” gesture, especially in modern times, appropriately parallel the flexible political persona that David crafted for himself during his lifetime.