Carel Fabritius’s “The Goldfinch” and Fiction 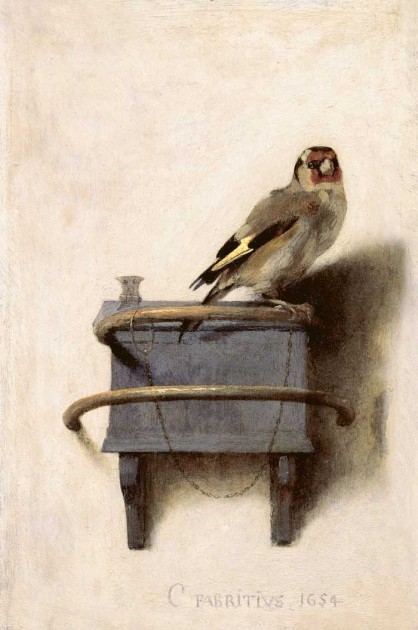 Several months ago, a student recommended that I read the novel The Goldfinch by Donna Tartt, since the book revolves around a stolen painting. I finally had a chance to read the book over the past week. I enjoyed a lot of things about this engaging book, though I also felt like most of the story was overwhelmingly depressing – I wish I had been warned about that!

The stolen painting in this work of art actually does exist, although it was never stolen in actuality. Carel Fabritius, a student of Rembrandt, painted The Goldfinch in 1654. (You can learn more about this painting and Fabritius HERE). I am struck by this painting in a few ways, particularly due to the creamy colored background (which was thought to be yellow, due to discolored varnish, before a restoration in 2003). The light background is particularly interesting to me, because Fabritius would have probably was taught more about dark, Caravaggesque backgrounds by Rembrandt. The Goldfinch still seems a bit Caravaggesque to me, in terms of the light and dark contrasts created by the shadows of the bird and box, but it also seems anti-Caravaggesque because of the light background itself. Was Fabritius conscientiously going against the Caravaggesque fad at the time?

It’s difficult to know Fabritius’s intentions with this painting or his now-lost works of art. Today, only about a dozen paintings are known to be by Fabritius. The Goldfinch was painted the same year that Fabritius died in an tragic accident: a gunpowder magazine near the artist’s studio in Delft exploded, which killed the artist and probably destroyed much of his work. This explosion greatly affected the people of Delft, since a large part of the city was destroyed and hundreds are estimated to have died. Another artist, Egbert van der Poel, painted several depictions of this historic explosion, including The Burning City which is part of the Seattle Art Museum’s permanent collection. Donna Tartt explains about Fabritius’s untimely death in her novel, and draws a parallel with another modern-day tragedy in the book that happens to the protagonist. All of Tartt’s quotes and historical information about paintings and artists in the novel seemed accurate to me, although I noted that one character erroneously asserted that Fabritius was Vermeer’s teacher.1

The protagonist, Theodore Decker, moves from scenario to scenario in which he is forced to endure extreme tragedies, sorrows, and the deal with the negative consequences of bad actions (either due to his own actions or those around him). I found it interesting that the goldfinch was a pervading icon throughout this book that revolves around suffering, since in Christianity the goldfinch is a symbol of Christ’s Passion and suffering. I didn’t feel like this symbolic idea was ever explicitly addressed in the book. The goldfinch eats thistles, which associate it with the Crown of Thorns placed on Christ’s head. It also has bright red markings on its face, which connects it to the blood of Christ. Many artists, both before and after the lifetime of Fabritius, painted the goldfinch in a variety of religious contexts due to these symbolic associations. 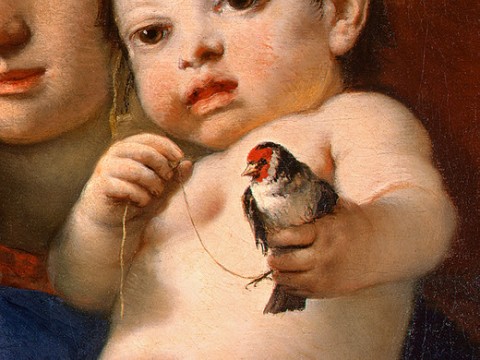 Giambattista Tiepolo, detail of "Madonna of the Goldfinch," c. 1770

Fabritius lived at a time when Dutch artists, in typical Protestant fashion, were interested in creating secular, albeit moralizing, works of art. The goldfinch was a popular pet in Holland in 17th century, so in many respects this painting is similar to a genre paintings or still life. There even could be a moralizing theme to this work of art: the bird is chained to a wooden box, which could pose a message about domesticity and flight.2 Regardless of the impetus to create secular subject matter in Holland, I do think that Fabritius would have probably been aware of the religious symbolic significance of this bird, too. If Tartt had included this idea in her novel, I think it could have added another layer of significance and meaning to her book.

1 Donna Tartt, The Goldfinch (New York: Little, Brown and Company, 2013), 26. Although it appears that Fabritius influenced Vermeer, a contemporary artist who lived in Delft, there is no historical documentation that Fabritius was Vermeer’s teacher. In fact, it is thought unlikely that Fabritius taught Vermeer.

2 Frick Museum, “The Goldfinch.” Available online here: http://www.frick.org/exhibitions/mauritshuis/605. Alternately, it has been proposed that the bird is not chained to the box, but to a water-like container that is in the box. Goldfinches were known for performing the trick of collecting their own water. The bird could have been chained to a thimble-like container with which it could access water in the wooden box. In Dutch, the goldfinch is known as “het putterje” (“The Water Drawer”)  for this reason; Fabritius’s painting is titled “Het Putterje” in the Dutch language.