I’m preparing a lecture on the Impressionists, and I’ve been completely distracted by Monet’s Déjeuner sur L’Herbe (“Luncheon on the Grass”). Yes – that’s not a typo. I meant to write “Monet,” not “Manet.”

Maybe you’re saying “What?” just like I did fifteen minutes ago. Don’t get too bewildered: Manet DID a very seminal painting that is called Le Déjeuner sur L’Herbe (1863). And Manet’s painting is infinitely more well-known than Monet’s early work with the same title. But allow me to bring Monet’s painting out of obscurity:

Monet, Le Déjeuner Sur L’Herbe, 1865-66
It’s interesting to see a painting by Monet that includes human figures. (You can see a figure study for this painting here.) I’m so used to seeing Monet paintings with haystacks and Rouen Cathedrals and water lilies and train stations – it’s so nice to see something different. You also might have noticed that this painting was made just about two years after Manet completed his painting with the same title. A coincidence? Definitely not. There’s no question that Monet was influenced by Manet.

Other painters were also influenced by Manet’s 1863 painting. Cezanne did his own picnicking painting with the same title, and Picasso did several versions that were directly inspired by Manet. In fact, the Musee d’Orsay did an exhibition (which ended in February 2009) that revolved around Picasso’s variations of Manet’s Le Déjeuner sur L’Herbe. Here’s one Picasso example:

So, what do you think? Did you know that Monet painted a Déjeuner sur L’Herbe? (I really hope that I’m not the only one who was unaware of that fact.) Which version of the subject matter do you like the best? 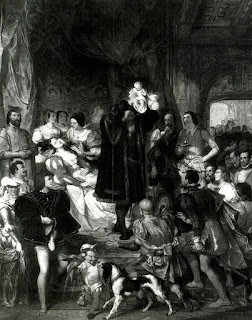 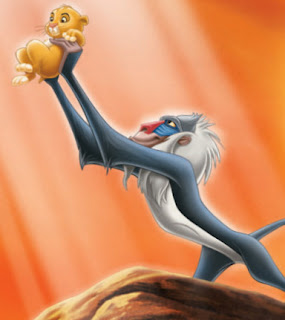 Jan van Eyck, The Annunciation, c. 1435
My favorite thing about this painting: the awesome rainbow wings on the angel Gabriel. I also love the that Gothic and Renaissance references are combined in the same architectural setting, references the Old and New Testament.
Georges de la Tour, Adoration of the Shepherds, c. 1644
I particularly love the hand on the right which covers up a candle. Sigh – tenebristic lighting is awesome. I also love the adoring expression of the man on the right.

Brian Kershisnik, Nativity, 2006
You HAVE to click on the image above to see all of the details in this painting. I saw Nativity a few years ago, soon after it was completed. This painting is HUGE (about 7′ x 17′), and the viewer can’t help but feel swept into the swarm of angels that swoop around the Holy Family. It’s quite moving.
Do you have a favorite piece of Christmas art?

– Music on the piano: “Oft in the Stilly Night” is a nostalgic song in which a the singer reflects upon childhood innocence and missed opportunities. (On a side note, this song is mentioned in A Portrait of the Artist as a Young Man by James Joyce – you can listen to the song by going here.)
– Music on the floor: “Tears, Idle Tears” is Edward Lear’s musical adaption of Tennyson’s poem. The sad poem seems to express sorrow over the woman’s predicament. (You can read the poem here).
– Rings: The woman wears rings on all of her fingers except her “wedding finger.”
– Hat and glove: The clothing objects are hastily cast aside, which indicates an abandonment of decorum. Because the hat is placed on the table, it shows that this man is a visitor and not a permanent resident in the house.
– Unraveled threads: A reference to the woman’s wasted life.
– Cat and bird: The cat is chasing a small bird underneath the table. This vignette is a reference to the woman’s predicament (the man = the cat, the woman = the bird).
– Light on the floor: Suggests enlightenment and potential redemption for the woman. Look closely at this photograph – can you see the man who blends into the background? That man is the artist Liu Bolin. He paints himself to “hide” within his photographs. I just watched this interesting newsclip about Bolin and his work. I think it’s pretty creative stuff. You can read more about the ideology that underlies Bolin’s art (and see more pictures of his work) in this article.

I like how these photographs emphasize the idea that a person is affected by his/her surroundings. I latch onto that idea more than any of the political ideas that influence Bolin, although I think that his artistic/political protest makes sense.