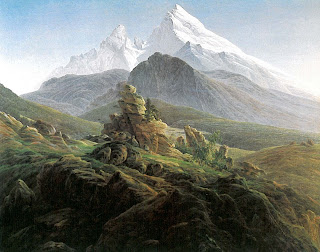 Ever since I was a teenager, I have been fascinated by the mountains and rocks. In college I toyed with the idea of becoming a geologist, but changed my mind after realizing how much math and chemistry was involved. Luckily, though, art history dabbles in so many other disciplines that I can read about geology and art at the same time.

Today I read an article by Timothy Mitchell which argues that Caspar David Friedrich was influenced by “historical geology” in his painting of Der Watzmann (1825, shown here). As a German Romantic painter, Friedrich was usually interested in depicting forests and rocky seashores. This painting of Der Watzmann, therefore, is a departure from the majority of Friedrich’s oeuvre. Mitchell argues that this interest in the Alps was influenced by the new study of geognosy (“knowledge of the earth”) that was developed by Abraham Werner, an instructor at a mining school in Freiburg. Werner’s geognosy focused on tangible evidence and facts. One of Werner’s protégés wrote, “What the geognost cannot reach with his hammer lies outside his province.”1 (Isn’t this stress on facts and evidence such a product of the ongoing Enlightenment?)

The Germans viewed the romantic landscape tradition as a type of nationalistic celebration. Mitchell convincingly argues that since discipline of geognosy was considered by the Germans to be both “of our time” and “thoroughly German in origin,” Friedrich would have been especially intrigued by the subject.2

Interestingly, Friedrich’s depiction of Der Watzmann is full of errors. Different perspectives of the mountain were combined together in the final painting. Although Mitchell suggests that Friedrich did not aim to create the mountain exactly as it appears (Mitchell instead ties this romanticized depiction as relating to the then-popular practice of worshiping God through nature), I also wonder if the different perspectives in this painting could partially have occurred because Friedrich never saw Der Watzmann in person – he was one of the few landscapists of the time who never traveled to the Alps. One would think that Friedrich would have been aware of the different mountain perspectives when examining other paintings of the peaks, but it cannot be certain. But, on the other hand, it was not unlike Romantic painters to, you know, romanticize their subject matter (!). That being said, I still am somewhat skeptical of Mitchell’s reasoning for the multiple perspectives.

I do, however, agree with Mitchell that the artistic stress on mountain peaks and rock formations in the foreground appear to be influenced by the geognostic theories regarding mountain formation. For example, one Werner’s theories is that the present state of the earth is due to a flood, which is best evidenced by the existence of massive boulders in the mountains. It appears that Friedrich added these boulders in the foreground of his painting as an allusion to this geognostic theory.3

There are more complexities to Mitchell’s argument which are also very interesting. If you care to read more, you can find this article on JSTOR.