I Heart Pliny the Elder

I’ve been reading snippets of Pliny the Elder’s Natural History over the past few days, and I can’t help but think that the ancient Roman and I would have been friends. I definitely feel as curious about the world as Pliny the Elder, but hopefully I am a little more practical (i.e. I wouldn’t risk my life to observe the eruption of Mt. Vesuvius).

There are two things that I like about Natural History. For one thing, I like Pliny’s little anecdotes about artists (I’m sure my penchant for anecdotes is no surprise, gentle reader!). Even though some of the stories seem a little too legendary and far-fetched (Vasari would have loved some of these stories for his Vite), they are still quite fun. For example, Pliny devotes a whole section to stories about the Greek painter Apelles of Cos (you can read some of the stories here). One such story involves speculation that Apelles painted Alexander the Great’s mistress Pancaste for Aphrodite Rising from the Foam (“Aphrodite Anadyomene,” shown above in a Roman mural from Pompeii (House of the Marine Venus, 1st century AD) which is thought to have been based on Apelles’ original work). 1

I’m especially amused by this story about Apelles and a picture of a horse:

“There is, or at least there once existed, a picture of a horse by Apelles. It was painted for a competition in which he sought judgment not from men but from dumb animals. For, seeing that his rivals were getting the upper hand by devious means, he showed the pictures individually to some horses he had brought in, and they neighed only at Apelles’ picture. As this frequently happened on subsequent occasions it proved to be a good test of the artist’s skill.” (Natural History XXXV:95).

The other thing I like about Pliny the Elder is his apparent passion and excitement for his subject matter. I love that he calls the pyramids “a pointless and absurd display of royal wealth.” (Natural History XXXVI: 75) (Not that I agree with that statement, I just love his frank opinion.)

I also can relate to his awe regarding the Colossus of Rhodes (one of the Seven Wonders of the Ancient World, original c. 292-284 BC, shown left through a wood engraving reconstruction by Sidney Barclay, c. 1875). I’m always interested in how a sculpture’s scale compares to that of a human being, and Pliny seems to have that same interest: “No statue has commanded greater admiration than the Colossus of Rhodes made by Chares of Lindos, the pupil of Lysippus. It was about 105 feet high. Sixty-six years after its erection the Colossus was toppled by an earthquake, but even lying on the ground it is amazing. Few people can make their arms meet round its thumb, and the fingers alone are larger than most statues.” (Natural History XXXIV:42). (On a side note, it was announced about two years ago that the Colossus of Rhodes was going to be rebuilt as a giant light sculpture. Does anyone know if progress has been made on that project?)

1 Pancaste could really be labeled as Alexander the Great’s ex-mistress. Pliny records that the ruler commissioned Apelles to paint Pancaste, and then Apelles ended up in love with his subject. In turn, Alexander gave Pancaste to Apelles, which Pliny noted was indicative of Alexander’s magnanimity. (Natural History XXXV:86-87). 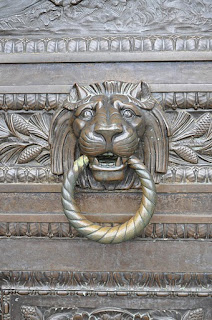 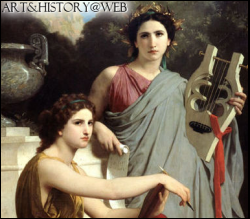 Three Pipe Problem has started a new series, Art&History@Web, which highlights different art history blogs (and bloggers).  I think this is a great idea, especially since it can help art history bloggers become aware of new blogs and ideas.  I am honored to be featured as the first interviewee for this new project.

So, if you’ve ever wondered who is the nerdy person behind all of these art history posts, here’s your chance.  You can read my interview here, and even see a picture of me in my spectacled glory.

George Frideric Handel (shown on right in a portrait (1726-28) attributed to Balthasar Denner) is one of my favorite Baroque composers. And it’s not only his music that I like: the more I learn about things related to Handel (such as his passion for food (so much that he withheld fine food from guests in his home), or even seemingly unrelated things, like the fact that he and Jimi Hendrix could have been next-door neighbors), the more I am intrigued by him.

Hence, I became helplessly distracted this afternoon when JSTOR’s unreliable search engine brought up Thomas McGeary’s article “Handel as Art Collector: Art, Connoisseurship and Taste in Hanoverian Britain” (when I had typed in keywords to search for medieval illustrations of French queens). 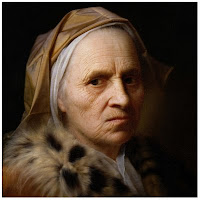 It was interesting to learn that Handel was a prolific art collector.  He was recorded to have “taken great pleasure in contemplating the works of art” in his collection.1 I really enjoyed learning about the nature of his collection, too. Despite the fact that Victorians praised Handel for his biblical oratorios, the composer had few biblical works of visual art.2 Instead, Handel was drawn to more landscapes, Dutch/Flemish paintings, French classical painters (e.g. Poussin), and a handful of Italian artists. Handel didn’t care too much for portraits of individuals (which is unusual, since portraiture was so popular in England at the time), and it appears that he even gave away all portraits of himself. He did, however, have two pictures of heads by Balthasar Denner, one of which may have resembled Denner’s Portrait of an Old Woman (before 1721, shown above left).

It also is apparent that Handel bought works of art simply because he liked them; he doesn’t give one the impression of a hard-nosed collector who is interested in owning works by all major artists and schools, nor was he interested in collecting works by the Old Masters. He also didn’t follow the contemporary craze to purchase works by William Hogarth, even though Handel might have known Hogarth personally. Instead, Handel did “his own thing” when it came to art collecting, which (I think) indicates an aspect of his personality that translates into his musical compositions: instead of closely following musical trends, Handel created his own musical style (which I think is instantly recognizable). He wrote music that appealed to him, just as he collected art which he found appealing.

2 McGeary lists the few biblical works that Handel owned: Hagar and the angel, the finding of Moses, prints of rest on the flight into Egypt, a Guido Reni altar-piece and possible a pair of biblical prints.  McGeary suggests that the lack of biblical scenes could be due to a Protestant fear of idolatry. It is interesting to see McGeary’s comparisons of Handel’s collection with other collections, which have large numbers of biblical scenes (approximately 27-33% of the collections mentioned). See Ibid., 533-576.

The Earthly Paradise blog (which is a great resource for those interested in Victorian culture and the Pre-Raphaelite Brotherhood) is hosting an art history blog carnival each month, and the first issue was released this morning. I was pleased to learn that one of my posts from Alberti’s Window was selected for this month’s issue. Hooray!

If you are an art history blogger, I’d strongly recommend that you submit a post to be considered in an upcoming issue of the blog carnival. Although I was familiar with many of the blogs and posts in this issue, I enjoyed becoming acquainted with new sites, writers, and ideas. We art history bloggers are so few; I think The Earthly Paradise could help us come together and strengthen our little blogging community.