Yesterday one of my students gave a presentation on the Alexander mosaic from Pompeii. The student mentioned having a chance to visit the House of the Faun when he was younger, and showed the class an image of his younger self at the site. The House of the Faun is most important surviving house from Pompeii, and originally it was so large that it comprised a whole city block!

Today, the Alexander mosaic in the House of the Faun is a copy and the original mosaic is located in the National Archaeological Museum in Naples. The original mosaic was discovered at the House of the Faun in 1831; it was located on the floor of the exedra, which is a rectangular room off of the first peristyle court. This indicates that guests would have seen this mosaic when they came to visit with the owner of the house in the exedra space. In order to better preserve the Alexander mosaic, it was moved to the National Archaeological Museum of Naples in 1843. 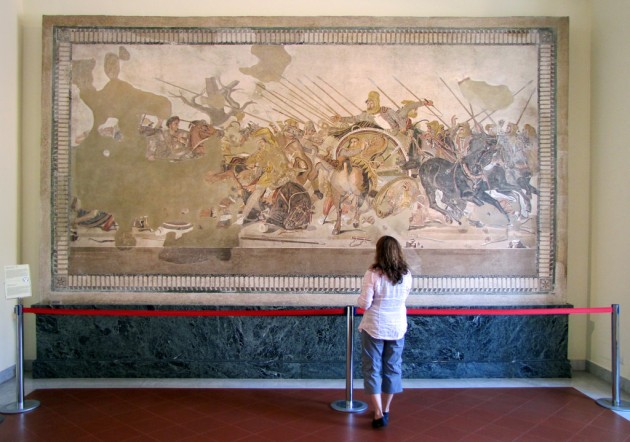 My student’s presentation reminded me of a lecture that Dr. Diana Kleiner gave on Pompeii, in which she discussed the Alexander mosaic (see 47:10 – 54:00 of this video clip). In her lecture, Diana Kleiner expressly points out how the museum displays the mosaic on the wall, which is inaccurate to the original placement of the floor mosaic. I can see her point, especially since the museum display tries to replicate the exedra of the House of the Faun (where the mosaic originally appeared). However, I also don’t mind that the mosaic currently is on the wall, because it can also serve as a reminder of how the original mosaic itself is a copy of a now-lost Greek wall painting from the beginning of the Hellenistic period in Ancient Greece (probably from c. 310 BCE, which is just a few years after the death of Alexander the Great in 323 BCE). 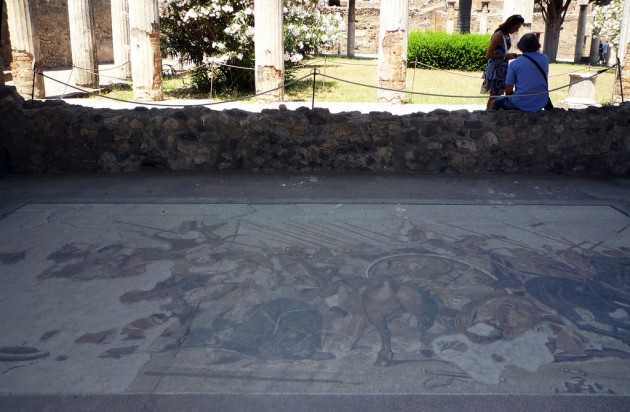 A copy of the Alexander mosaic was placed in the House of the Faun in 2005. The process of creating this replica was daunting, since the large mosaic is comprised of over two million pieces of tesserae.1 The project took 16,000 hours of work and cost $216,000.2 So, in essence, this replica is a modern copy of a Roman copy of an original Greek painting. 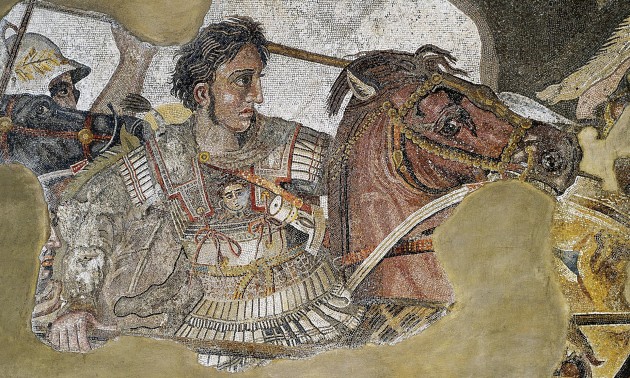 Both the mosaic replica and the original mosaic are impressive in their own right. Diana Kleiner makes a good point in her lecture, too, about how the original Alexander mosaic is perhaps even more impressive than the original painting, since illusionism and foreshortening appear with small pieces of stone instead of pigment (see 50:11-51:19). It is unsure whether this floor mosaic was created by a Roman or Greek artist, but the translation of the imagery into mosaic form shows a high level of technique and precision!3

3 It is possible that this mosaic was created by a Greek artist who worked in the Roman empire in the 1st century. We know of other Greek artists who created mosaics for the Romans. For example, in the 2nd century a Greek mosaicist named Herakleitos worked in Rome and created “The Unswept Floor” mosaic that is currently in the Museo Gregoriano Profano (Musei Vaticani). This mosaic is signed by Herakleitos: ΗΡΑΚΛΙΤΟΣ ΗΡΓΑΣΑΤΟ