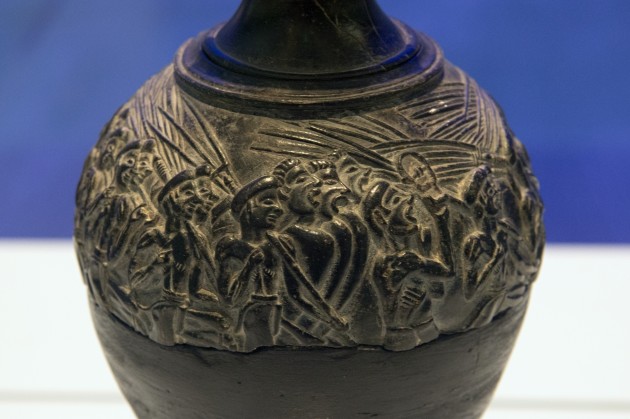 Last week I introduced my ancient art students to the Harvester Vase, and some aspects of our discussion have caused me to do some further research on this vessel. This is a Minoan work of art which comes from Hagia Triada; it is thought to perhaps represent harvesters or sowers in some type of religious procession.1  Even though only fragments of the original vase remain, it is likely that the Harvester Vase had a hole at the bottom (in addition to the wider “filler” opening at the top), so that liquid could “flow through [it] like a funnel.”2 This small hole at the bottom could be covered by the hand of whoever was carrying the vessel during a ritual or procession, and then the hand easily could be moved away to dispense the liquid libation or offering.

Only the upper portion of the vase (and part of the lid) are original pieces; they have been mounted together to give a semblance of the original body of the vase. This appearance has been determined by comparing the steatite fragments to other similarly-shaped Minoan vases (see one such example HERE). Sir Arthur Evans suggested that the relief on this vase may have been covered with gold leaf.3 No gold traces of gold have been found on the Harvester Vase, but other Minoan vases have been discovered since with traces of gold leaf.4 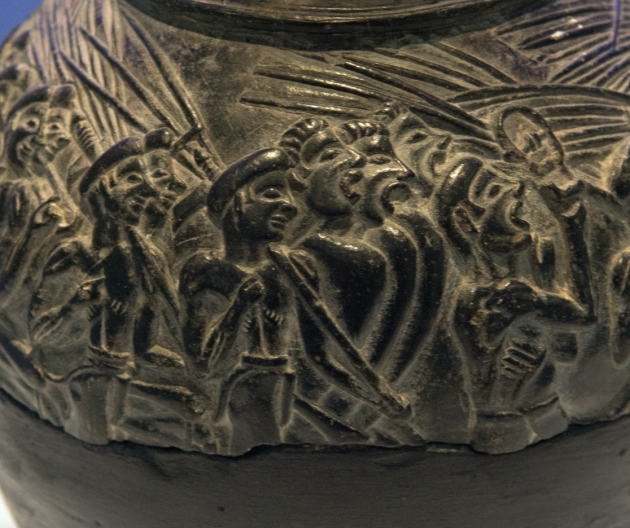 This vase is quite small, being only 4.5″ (11.3 cm) in diameter. However, there are so many details to notice in this small space, which make the artistry and craftsmanship all the move impressive to me. Recently I’ve found a few things that I haven’t noticed before. One thing that I realized is that many of the participants have one fist raised to their chests, which is a gesture that has been connected with ritual (see above).5 Barry P. C. Molloy also points out that this gesture is found in figurines of boxers that are located on Minoan peak sanctuaries, and could be associated with physical combat and warriors.6 Given the context that the Harvester Vase is also a rhyton (used for libations and religious ceremonies), the association of the clenched fist with ritual makes more sense to me.

Another thing that I noticed recently was the clothing and the hair styles of the figures. Most of them are bald, wearing a cap or headband, and are bare-chested (sometimes exhibiting a keen attention to musculature and anatomy on part of the sculptor). However, the three figures who are singing (behind the man who is playing the sistrum) are wearing long robes, unlike the rest of the bare-chested marchers. Of course, these men still seem less significant than the large priest-like figure who seemingly marches in front of the procession, who has long hair and wears an elaborate tasseled garment. 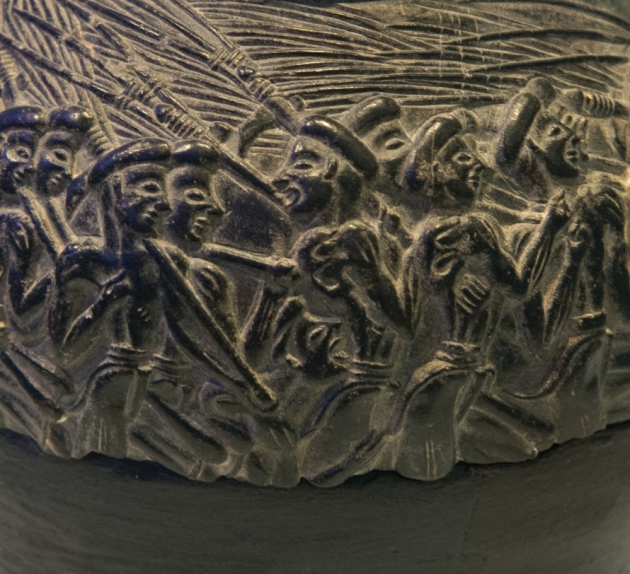 John Forsdykh argues that the one exception to the solemn procession is a man who has turned backwards to shout at a man who is stooping or stumbling. Forsdyke explains, “That man is usually said to be one of the harvesters who is fallen down in his drunkenness; but he has no forked implement and there is no reason to suppose that he is drunk.”7 Forsdyke, however provides no explanation for why the man is stooping. I’m not entirely convinced of the shouting exchange between the turned man and the stooping man either, since they are directly placed over the same vertical axis and there isn’t even a suggestion of eye contact between the two figures. Could the turned man be shouting orders or directions to the solemn, closed-mouth harvesters who stand directly next to him instead?

Perhaps we would get a better suggestion of what was happening in this vignette if we were able to see the whole vase. Maybe we would also get a better indication of why one of the men is either stooping or stumbling – did something on the ground trip him? Other people have also considered how our understanding of this vase is limited due to its incomplete state, too. For example, tn the early 20th century, a father and son artistic team (Emile Gilliéron Sr. and Emile Gilliéron Jr.) set out to to create an object which imagined the original appearance of the Harvester Vase. The Gilliérons specialized in creating reconstructions of antiquities for sale and were able to profit over the cultural interest in Minoan art following Sir Arthur Evans’ excavations. Unfortunately, though, I can only find one image of this Gilliéron vase (see below,) and it doesn’t include the scene with the stooping man, so I don’t know how they interpreted this vignette in the overall scene. 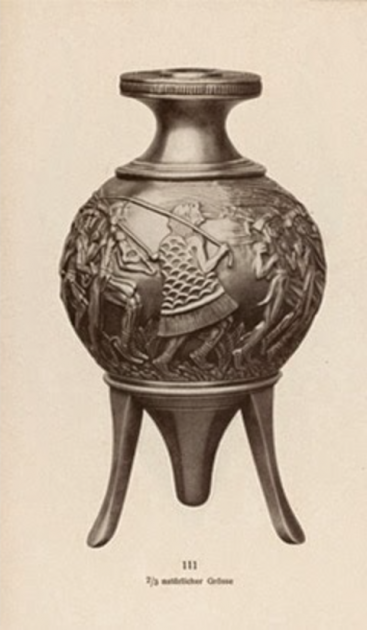 I like this image of the Gilliéron restoration, though, because I like being prompted to think about the legs of the figures who would have been energetically marching in the procession. I’m even reminded how some of the curves and angles are made for practical purposes (such as how the tilt of the priest’s kilt is likely due to a raised leg in motion). It is common today to discuss how the Harvester Vase depicts a sense of dynamic energy and movement, but it’s easy to forget that the sense of movement that is only a portion of what would have been seen on the intact vase in antiquity!

1 For a synopsis on interpretations of the vase in relation to harvesting or sowing, see Wendy Logue, “Set in Stone: The Role of Relief-Carved Stone Vessels in Neopalation Minoan Elite Propaganda,” in The Annual of the British School at Athens 99, (2004): 165-166. Logue mentions that the long poles carried by the marchers were interpreted by Müller as harvesting tools for fruit in trees (such as olives), whereas Forsdyke proposed that this was a ritual that took place before sowing.