Longtime readers of my blog may remember when I wrote a post about istoria painting and the game of hide-and-seek to find the “figure in communication” (who is looking out at or communicating with the viewer of the painting). Lately I’ve been thinking more about istorie. Out of all of Alberti’s recommendations for this special category of painting, I feel like his recommendation regarding the depiction of modesty is the most difficult for art history students to pinpoint immediately. This confusion makes sense, since the word “modesty” has many definitions:

1) The avoidance or impropriety or indecency, through one’s appearance, manner, or behavior

2) A person’s unassuming state about their abilities or appearance

3) The quality of something being relatively moderate, limited, or small in amount

In the case for Alberti, I think he was thinking of all three definitions of the word “modesty.” The first definition of modesty about impropriety may seem confusing given the popularity of the nude form in Renaissance art, but Alberti wrote:

“If it is allowed here [in the painting], there ought to be some nude and others part nude and part clothed in the painting; but always make use of shame and modesty. The parts of the body ugly to see and in the same way others which give little pleasure should be covered up with draperies, with a few fronds or the hand.”1 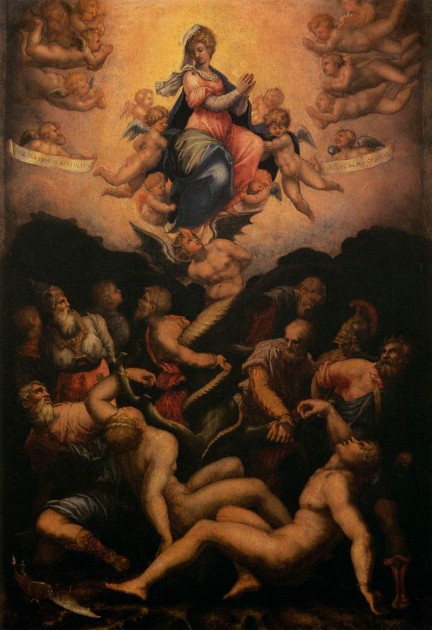 So, one could immediately connect this statement with censorship and modesty in relation to indecency, and perhaps Alberti does have that in mind to a degree – it seems like there is some tension in the Renaissance to resolve the desire to depict biblical figures within a classicizing, nude style. So far I haven’t found a Renaissance painting that literally applied Alberti’s recommendation to use a frond-as-a-coverup, although the figure of Truth in Botticelli’s The Calumny of Apelles (see below) covers her genitalia with a long tress of blonde hair.

Similarly, I think that Vasari’s painting, Allegory of the Immaculate Conception (shown above) could serve as an example of this consideration of modesty, since the nude figures in the foreground are twisted in a way so that there isn’t an excessive focus on their sexual organs. At the same time, though, Vasari recognizes the beauty of the nude form in this painting with the various nude, idealized angels that surround the Virgin. Similarly, Vasari’s painting Incredulity of Saint Thomas depicts Christ with an prominently-displayed idealized torso, but drapery covers the lower half of his body.

However, Alberti also seems to be thinking about “modesty” in other ways. He also continues in his text to explain:

“The ancients painted the portrait of Antigonos only from the part of the face where the eye was not lacking. It is said that Perecles’ head was long and ugly, for this reason he – unlike others – was portrayed by painters and sculptors wearing a helmet. Plutarch says that when the ancient painters depicted the kings, if there were some flaw in them which they did not wish to leave unnoticed, they ‘corrected’ it as much as they could while still keeping a likeness. Thus I desire, as I have said, that modesty and truth should be used in every istoria.”2

This explanation leads me to think that Alberti is also considering the second definition of modesty: the state of not being too proud or confident about oneself or one’s abilities. In this case, I think that Alberti is thinking about the modesty of the figures within the painting, and the self-effacing tendency of the figures to not visually showcase any feature which is exaggerated or unsightly. This self-effacing context made me think of the personification of Remorse shown in Botticelli’s istoria painting,The Calumny of Apelles (detail shown below). Remorse is depicted as an old woman, but she doesn’t showcase her old wrinkles too much for the viewer and covers much her face with a hood. Instead, Botticelli opted to cover up most of her unsightly, aged features, which perhaps visually suggests – without reading too much into the subject matter – a self-effacing characteristic that figure. 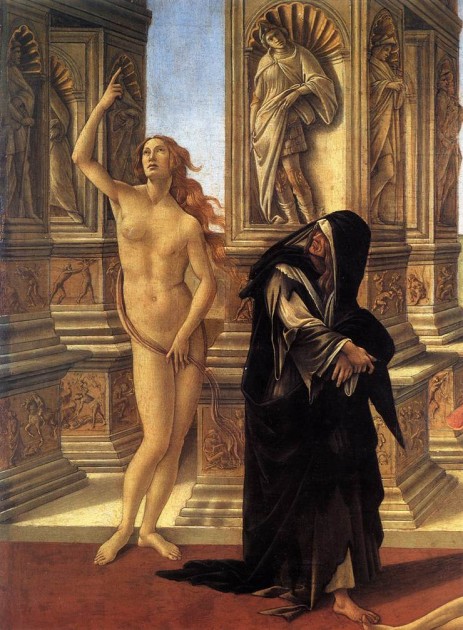 Finally, the context of Alberti’s writing also suggests that modesty can relate to the third definition about something that is small or limited in number. Before his discussion on modesty, Alberti writes about dignity and restraint. Although he recommends a complex composition in istoria painting (which involves a variety of figures in various poses), but at the same time also warns against excess. He explains,

“In my judgement no picture will be filled with so great a variety of things that nine or ten men are not able to act with dignity.”3

I think Botticelli’s The Calumny of Apelles also serves as a good example of limitation in number. Although Botticelli includes ten figures (not to mention all of the figures depicted as sculptures) within his painting, his composition is not overly crowded. Instead, Botticelli is able to exercise modest restraint with his composition, and showcase a variety of poses and figures while still utilizing ample areas of open space to emphasize this restrained modesty. 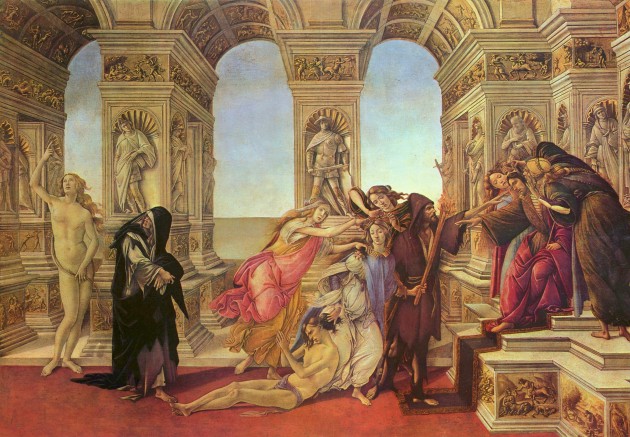 Do you know of good examples of istorie that fit with any of these definitions and connotations of modesty? Please share!