This afternoon I learned that I can no simply write “Alma-Tadema” to designate the paintings of Sir Lawrence Alma-Tadema, a Dutch-born artist who worked in England in the latter part of the 19th and early 20th centuries. Writing just the last name would be too confusing, since I now have learned that Lawrence was not the only painter in his family: his second wife, Laura Theresa Alma-Tadema (maiden name: Laura Epps) was a painter as well, as well as his daughter Anna! I love the thought of the Alma-Tademas painting together and consulting each other on their latest artistic project. I want to highlight these two lesser-known female Alma-Tadema artists, Laura and Anna, in this post.

According to her obituary in The Times in 1909, Laura was being trained as a musician until she met Lawrence Alma-Tadema, who subsequently taught her how to paint. The two were wed that same year, in 1871. The paintings by Laura Alma-Tadema are different than her husband, though I do think that their styles are complementary. Although both husband and wife were interested in depicting scenes from the past, Laura’s paintings tended to focus more on genre and domestic scenes. 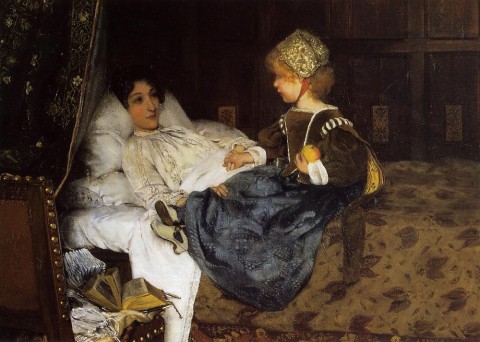 The painting Always Welcome (shown above), suggests the interior of a Dutch home in the 17th century, particularly due to the clothing of the little girl. In this scene, a young girl has come to visit her invalid mother. This painting was owned by the collector Sir Merton Russell-Coates, and it was Merton’s favorite piece in his extensive collection. The painting also resonates with me, since my littlest sister, a blonde, was five years old when my dark-haired mother fell very ill and was bedridden some years ago.

Similar subject matter that celebrates the Golden Age of Holland can be seen in lots of Laura’s other paintings, including At The Doorway and Sweet Industry. Although I do think that her husband was the greater of the two artists (there are some bits of awkwardness in her proportions and stiffness in her figures at times), I’m glad to know that Laura was a painter in her on right. She exhibited regularly at the Royal Academy and also exhibited elsewhere in Europe, including the International Exhibition in Paris (1878) and International Art Exhibition in Berlin (1886). 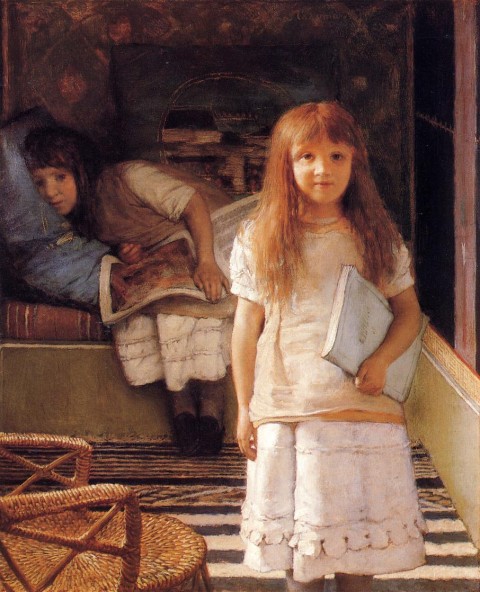 Lawrence Alma-Tadema, “This is Our Corner,” 1872. Image courtesy Wikipedia

There is no doubt that Lawrence and Laura’s artistic influence played a role in the art created by Lawrence’s daughter, Anna. Anna and her elder sister Laurence were born to Lawrence’s first wife, Marie-Pauline Gressin Dumoulin, who died the year that Anna turned two years old. The two sisters are depicted in This is Our Corner (shown above), painted by their father Lawrence in 1872. 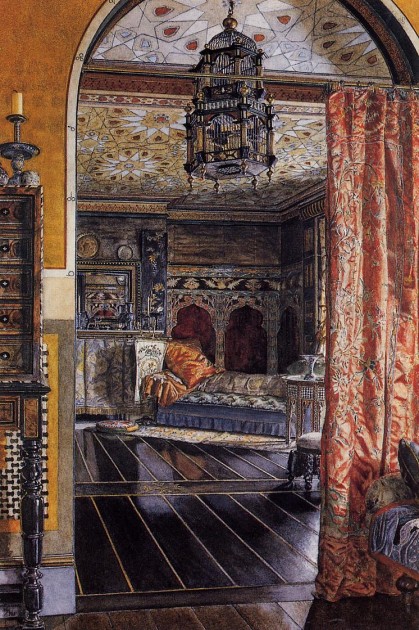 Anna Alma-Tadema enjoyed some success as an artist, particularly during the time that her father was also alive. Like her stepmother Laura, Anna also exhibited at the Royal Academy and other international exhibitions. Anna was a talented artist with an eye for fine detail, which allowed her to create some beautiful paintings of domestic interiors full of exotic and luxurious items. One watercolor, The Drawing Room (1885, shown above), was created when Anna was a teenager. This painting was exhibited in the Columbian Exhibition in Chicago in 1893. I think it is easy to see how Anna’s taste for luxury and exoticism fits with the aesthetic of her father’s romanticized and orientalist paintings. 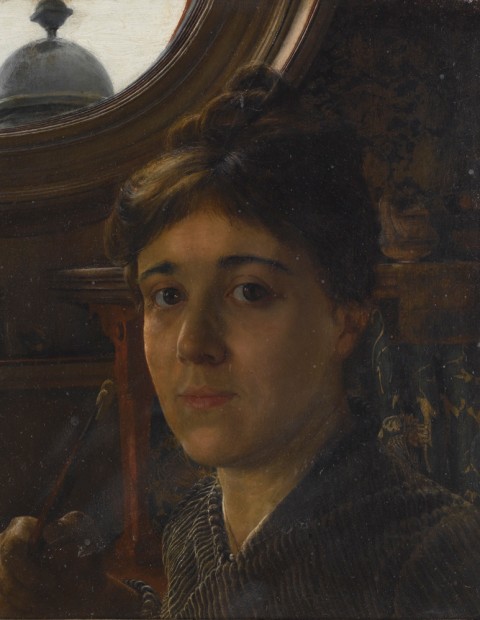 The two Alma-Tadema sisters never married – in fact, Laurence, a writer, wrote a short poem, “If No One Ever Marries Me” in 1897. The two sisters reputedly lived in poverty and obscurity after their father’s death, which is unfortunate given their talent and promise. In order to help pull Anna’s work out of obscurity, I’ll be more careful and specific when I label something by one of the Alma-Tadema painters. Even in writing this post, I found several paintings by Laura and Anna which were attributed to Lawrence (something that another blogger lamented back in 2011!).

What are your favorite paintings by either Lawrence, Laura, or Anna Alma-Tadema?