I’m on a roll this week with my posts on 19th century art, aren’t I? I have been discussing Manet’s Le Déjuner sur l’herbe (Luncheon on the Grass) with my students over the past few days, particularly in how this painting caused a scandal when it was displayed at the Salon des Refusés in 1863. In that discussion, I had a student ask what was the first painting that Manet ever submitted to the Salon for consideration. I didn’t know that answer off the top of my head, so I looked up that information after class.

After a little research, I learned that The Absinthe Drinker (c. 1859, shown below) was submitted to the 1859 Salon, when Manet was twenty-seven years old. It was rejected almost unanimously by the committee, with only Eugene Delacroix voting in its favor. I can see why this painting was rejected. The painting looks rather unfinished, and the legs of the figure are quite awkward. The feet turn outward in an awkward way, so that it looks like the shoes are worn on the wrong feet! That being said, I can’t deny that I’m also drawn to the contrast of the black shoes and bottle with the light-yellow floor. 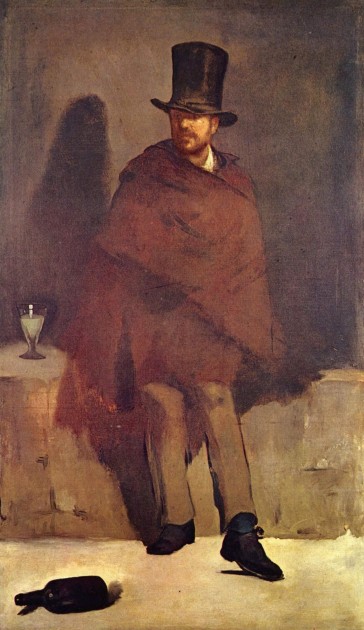 Two years later, in 1861, Manet had two paintings accepted into the Salon for the first time. At this point, Manet was twenty-nine years old. One of these debut paintings was The Spanish Singer (1860, shown below). This also was the first work that brought Manet critical success and recognition; he actually won an honorable mention at the Salon for this painting. 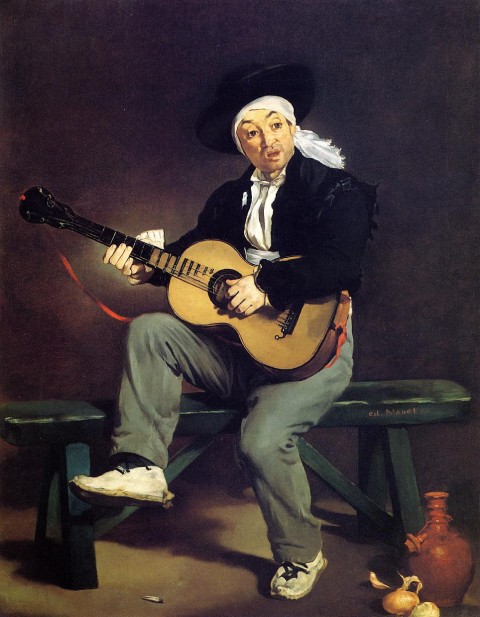 The other painting which was accepted into the Salon of 1861 was a portrait of Manet’s parents, Portrait of M. and Mme Auguste Manet (1860, shown below). This painting did not receive critical attention or favor, which makes sense to me. Madame Manet’s facial features are a bit awkward and asymmetrical (more so, than say, Manet’s Olympia), and the shading of her face seems a bit inconsistent. 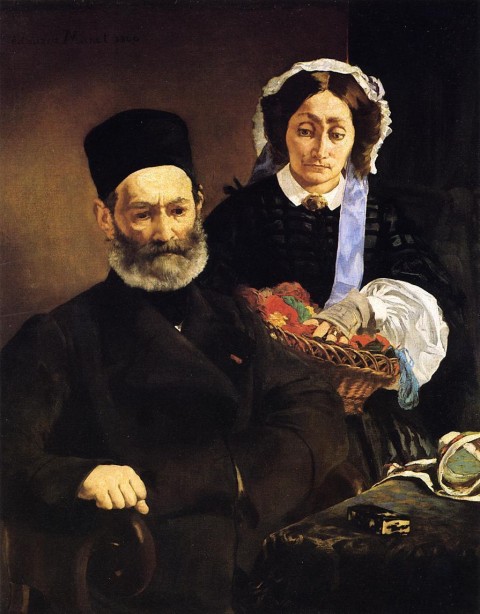 It was fun for me to look into these paintings and see some works of art that preceded Manet’s more famous paintings like Luncheon on the Grass and Olympia. I think these earlier paintings are great examples of how Manet was influenced by Velasquez. I particularly thought of Velasquez’s The Water Carrier of Seville (1618-1622) when I looked at these early works, particularly in terms of the color palette, dramatic use of light, and the Caravaggesque background.

It was surprising for me to realize that Manet was in his late twenties when he started submitting paintings to the Salon. He achieved a lot of attention for his art (for better or for worse) fairly early in his life, especially considering that he was just thirty-one when Luncheon on the Grass was hung in the Salon des Refusés in 1863! (This same year, Manet married his old piano teacher, Suzanne Leenhoff, a woman who was two years his senior. It could be that Manet fathered a son with Suzanne a little over a decade before the wedding.) I suppose it was good that Manet captured the attention of the Parisian artistic scene at a relatively young age, since he died of syphillis at the age of fifty-one.