Lavinia Fontana and the Female Self-Portrait

This month marks one year since my friend Hasan Niyazi, blogger from Three Pipe Problem, unexpectedly passed away. I have thought about Hasan a lot lately, particularly because I think he would enjoy some of the topics I am exploring with my students. I also miss the enthusiastic emails, comments, and tweets that he would write. I thought that this month I would post one or two of the guests posts that I wrote for Hasan’s blog. The following post first appeared on Three Pipe Problem in March 2011. Currently, the content of Hasan’s blog is no longer online, although I hope that will change in the near future. In the meantime, I would like to make this post I wrote available again, in Hasan’s memory. 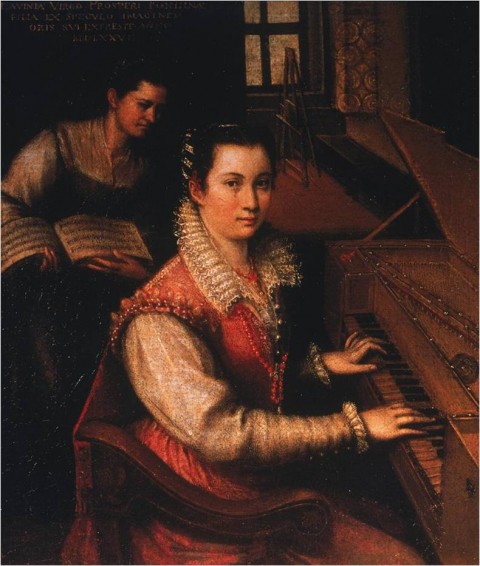 Lavinia Fontana, “Self-Portrait at the Spinet,” 1577

As an art historian who is interested in female artists, I am particularly intrigued by the way that Lavinia Fontana chose to depict herself in self-portraits. Since Renaissance women weren’t always in control of how they were portrayed in art (women were often depicted by male artists), I like to see how a female artist represented herself when she did have control over her image.

There are five self-portraits by Lavinia Fontana that are known: four paintings and one drawing. I would like to examine two of these self-portraits, including my own ideas with those that have been previously presented by Catherine King and Babette Bohn.1 I think these two portraits are quite revealing in terms of what Fontana felt was important to communicate about herself.

Fontana’s earliest self-portrait is quite unique, since it was created as a marriage portrait. This painting, Self-Portrait at the Spinet (also called Self-Portrait at the Keyboard) was made in 1577 for Fontana’s future father-in-law, Severo Zappi.2 I think Fontana felt some pressure at this time, since she was marrying into a family which held a higher social status than her own.3 One senses that Fontana felt a need to emphasize her wealth and status by observing various elements in her painting: her lavish clothing, jewels, and a servant in the background. Fontana also chooses to emphasize her accomplishments and abilities: she is playing an instrument and her easel is distinctly placed in the background. In addition, her knowledge and learning are emphasized by the fact that she includes a Latin inscription in the upper corner of the canvas.

I think this Latin inscription is rather interesting, since it is indicative of the social situation for female Renaissance artists. In translation, the inscription reads, “Lavinia virgin/maiden of Prospero Fontana has represented the likeness of her face from the mirror in the year 1577.” Isn’t it interesting that Fontana is emphasizing her virginity? Unsurprisingly, virginity was highly desired by prospective husbands at the time, but I think that Fontana mentions her virginity to fit further societal expectations. As Catherine King points out that in terms of self-portraiture, “the act of showing oneself to another was very different for a young woman than it was for a young man.”4 Hence, female artists needed to be careful in how they presented themselves in portraits. Fontana visually manifests this care by not only stressing her virginity, but by appearing in modest red dress that suggests marriage (red was the traditional color for wedding dresses in Bologna).5 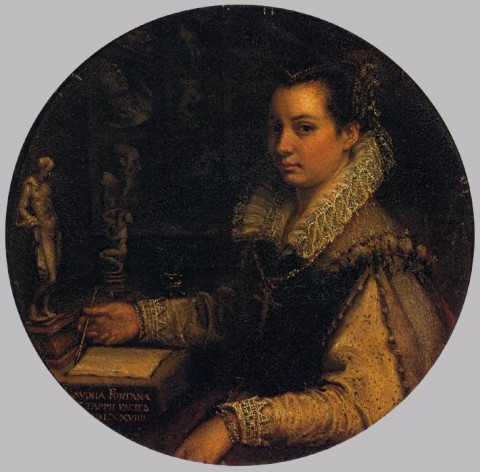 The self-portrait by Fontana that interests me the most was painted just two years after Fontana’s wedding portrait. This portrait is a tondo painted on copper (1579) and was created expressly for placement in a collection. On 17 October 1578, Dominican scholar Alfonso Ciacón wrote to Fontana and requested her portrait; Ciacón intended to publish an engraved gallery of 500 portraits of respected scholars, artists, and statesmen.6 No doubt Fontana felt honored to have her portrait be included in this engraved “gallery.” Fontana sent this portrait to Ciacón in 1579, but the book of engravings was never published.

Nonetheless, we can see that Fontana wanted to portray herself in a certain way, especially since she knew that her image was intended for display alongside portraits of other prominent individuals. As with the marriage portrait, Fontana opts to emphasize her learning and wealth. She manifests her scholarly pursuits (she’s not just a mere “craftswoman”) by showing herself among anatomical casts and classical statuettes. (A nineteenth century engraving of Fontana’s painting is helpful in seeing these details.) In addition, Fontana is interested in suggesting her wealth; she depicts herself in lavish clothing and she is sitting in an armchair (poor people owned only stools at this time).7

Once again, Fontana is careful in how she has presented herself (in order to meet societal expectations). Not only is she wearing modest clothing, but she further emphasizes her respectability by stating that she is married. The inscription in the right-hand corner of her portrait states: “Lavinia Fontana married into the Zappi family made this 1579.” In fact, this reference to her marriage was advantageous not only for purposes of societal decorum, but also a way to emphasize her social status, since the Zappi family held a comparatively high status in society.

As I have been writing this post and thinking about Fontana, I’ve come to a realization as to why I am drawn to female self-portraits. For one thing, I’m an art historian who is a woman. Although I am hopeful that the job market for women in academia is ever-improving (and equalizing), I think many women still feel cautious in how they present themselves in the academic world (in order to keep a competitive edge against men). I certainly feel that way. Along these lines, as a female blogger, I sometimes find myself concerned with how I portray myself in writing. Although I don’t feel that I experience the same difficulties as women in the Renaissance period, I experience an element of self-awareness when I need to portray myself (either visually or in writing). I think blog posts are my equivalent for self-portraits, especially since I’m not an artist!

1 Catherine King, “Italian Artists in Search of Virtue, Fame, and Honour c. 1450-c.1650,” in The Changing Status of the Artist, eds. Emma Barker, Nick Webb, and Kim Woods (London: Yale University Press, 1999), 72-74. See also Babette Bohn, “Female Self-Portraiture in Early Modern Bologna,” in Renaissance Studies 18, no. 2 (2004): 251-256. If you are interested in seeing information about the remaining three self-portraits which are not discussed in this post, see article by Bohn.

4 King, p. 67. For an example of extreme modesty in portraiture, see Sophonisba Anguissola’s Self-Portrait from c. 1555, in which she modestly covers herself with a mirror (which she protectively places in front of her body like a shield).

5 Bohn, 254. The red knot that is placed on the instrument was a symbol of love and betrothal at the time, which can also tie into Fontana’s interest in maintaining social decorum. For more information, see Liana De Girolami Cheney, et. all, Self-Portraits of Women Painters (London: Ashgate/Scolar Press, 2000), p. 60 (revised. Washington: DC: New Academia, 2009). The red knot is also discussed in Caroline P. Murphy, Lavinia Fontana: A Painter and her Patrons in Sixteenth-century Bologna (New Haven and London, 2003), 41–3.