My friend just shared with me an old Independent article, “Modern Art was CIA ‘Weapon'” (22 October 1995). It has been revealed that the American CIA used unwitting artists like Pollock and De Kooning to make political statements during the cultural Cold War with Russia. The decision to include culture and art in the US Cold War arsenal was taken as soon as the CIA was founded in 1947. As Abstract Expressionism (and modern art in general) gained momentum in the 1950s and 1960s, the CIA used this art to foster images of American creativity and and intellectual freedom.

This type of abstract art is a stark contrast to the Soviet Realism that was officially adopted as the only art form of the Soviet Union in 1934. Compare, for example, details from two paintings that were made about the same time: 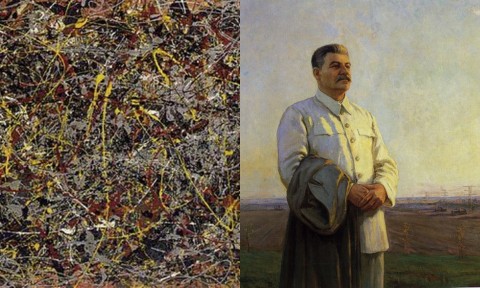 I think it is so interesting that the CIA used modern art as a political weapon, because art critics like Clement Greenberg endorsed modern art (specifically Abstract Expressionism) because it wasn’t associated with politics. Political art was “kitsch” in Greenberg’s opinion (as he emphasized in his 1939 essay, “Avant-Garde and Kitsch”). So, in some ways, the CIA was giving Abstract Expressionism political associations that were fundamentally opposed to the tenants of the movement! I’m sure Greenberg would have been appalled to know that his beloved modern art was being used for such lowly (!) propagandistic purposes.