Susanna and the Counter-Reformation 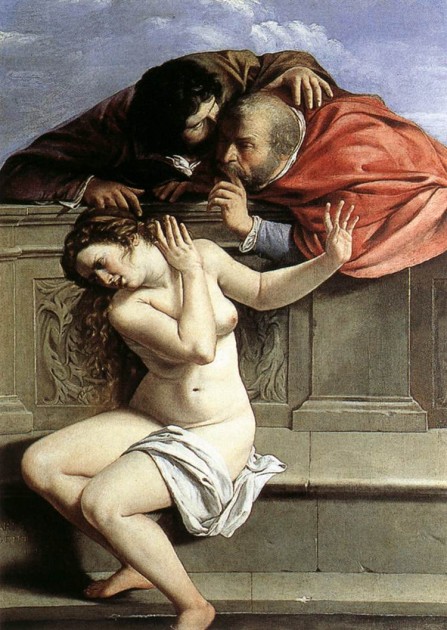 Artemisia Gentileschi, "Susanna and the Elders," 1610. Image courtesy of the Web Gallery of Art

“Susanna and the Elders” is an apocryphal biblical story of virtue and voyeurism. The story tells of a virtuous Israelite woman who was bathing, unaware that she was watched by two lecherous elders. After bathing, the elders accost Susanna and threaten to blackmail her unless she has sex with them. Susanna refuses to succumb to their threats, and eventually is saved. The story of Susanna and the Elders often appears in Renaissance and Baroque art. The inclusion makes sense for a lot of reasons. For example, the subject matter provided an excuse to depict the female nude.

One of the most popular depictions of Susanna and the Elders was created by the female artist Artemisia Gentileschi (see above). This painting has been discussed at length by feminist art historian Mary Garrard. Garrard discusses how Susanna’s twisted composition stresses her defensiveness and innocence. Garrard also delves into a discussion of Artemisia’s own biography, in which she was raped by her father’s assistant Agostino Tassi.

Although Garrard has some interesting ideas, today I’m more interested in writing about a more recent interpretation for this painting. Edward J. Olsewski published a short article in 2007 which discusses new ways to interpret this painting. Edward J. Olszewski agrees with some of Mary Garrard’s interpretations, but finds that we need to interpret this painting (and other depictions of Susanna going back to the Renaissance) within the context of the Counter-Reformation and extant literature. For example, he finds that nudity is a reflection of truth rather than merely male lasciviousness, and quotes several sources that discuss “truth unveiled” (Dante, Purgatorio XXXIII) or “nudity – that is truth” (Berchorius’ Moralized Ovid) to prove his point.1 He writes, “Much of the literature of the cinquecento associates goodness with beauty. Thus, Susanna’s nudity can be interpreted as an indication of her innocence, of the truth of her claims in the episode with the Elders.”2

I think this focus on truth and innocence is pertinent to the Counter-Reformation period, in which the Catholic Church is being accused of false doctrine and heresy by the Protestants. In fact, Susanna herself was seen as a symbol of the Church going back to the early Christian era: Hippolytus associated Susanna with the persecuted Church (finding her bath to be a parallel with baptism) and felt like her resistance of temptation prefigured the Church’s redemption of original sin.3 It seems to me that images of Susanna, therefore, served as a way to claim the innocence of the Church against the pestering and corrupt Protestants.

My ideas about Susanna and the Counter-Reformation sentiment are further supported by Edward J. Olszewski’s connections. He noted that Martin Luther and other northern Reformers had considered the story of Susanna to be apocryphal, which led to the exclusion of the story in the 1611 version of the King James Bible. In the Catholic Bible, however, the story remained as an apocryphal addition to the Book of Daniel. As a result, this apocryphal story seems to have been conscientiously depicted in Italian art as a visual assertion of the correctness —  one could even say the “naked truth” — of the Catholic Bible.4

4 Olszewski, p. 46. It is worth noting, too, that “Susanna and the Elders” paintings were also created by Northern European artists, such as Rembrandt and Rubens. I believe, though, that the subject matter of Susanna and the Elders would have held particular meaning to a Counter-Reformation audience.