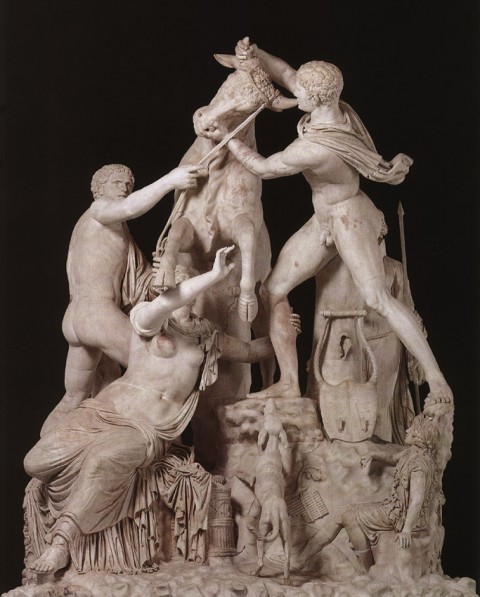 Apollonios of Tralleis and Tauriscus, The Farnese Bull, 2nd century BC or 3rd century CE

Although I’m not a specialist in Hellenistic or Roman sculpture, I like to feel like I am pretty savvy regarding the major works of art from these periods. Up until earlier this year, however, I was not familiar with the “Farnese Bull” (shown above). This sculpture, which was excavated in 1545, was soon placed in the Palazzo Farnese as part of the collection of Pope Paul III (formerly Cardinal Alessandro Farnese).

At almost 12 feet (3.7 m) in height, this sculpture has a dominating presence. In fact, the complex composition and large scale made me wonder why I hadn’t seen this work of art in more art history textbooks. Although I have since learned of a few sources which discuss this book (including a great entry in Haskell and Penny’s Taste of the Antique), I still think that this work is underrepresented in art history textbooks geared for college students. And, after doing some research, I think I have figured out why this book isn’t discussed in more: the subject matter, history, and historical reception of this piece are really complex and messy. Taking my cues from Haskell and Penny’s entry, I thought I would outline a few things to prove my point: 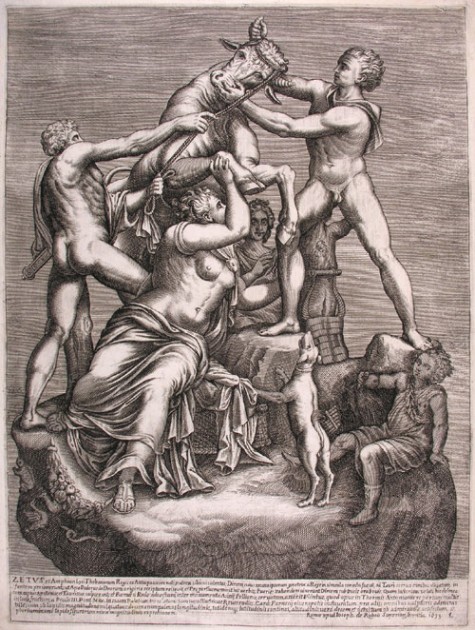 So, despite the high praise that this work of art experienced in the Renaissance period, it doesn’t seem to have gotten a lot of attention today from art history textbooks. Is it too difficult for textbooks to introduce “messy” situations to undergraduate students? Perhaps it is tricky at times, but I also think that students are bright enough and capable enough to grasp the complexity of art history. In fact, I think it’s good for them to realize how art history is a compilation of various opinions that have built up over time. (It seems like the omission of this sculpture in art history books is an indication of what is and is not valued today in art history.) I also think that it is a good idea to introduce issues of “quality” to students, so they can think about how the concept of quality is a construct.

Has anyone seen the “Farnese Bull” or one of its copies? What was your opinion of the piece? Also, has anyone seen the “Farnese Bull” treated at length in a traditional (and relatively recent) art history textbook for college students?2 I’d be interested to see how this sculpture is treated in such a text, if it exists. Haskell and Penny’s catalog is great as a scholarly resource, but I’m not sure if it is very practical as a textbook for a college course.

2 I did find one online academic source which discusses the Farnese Bull at length, but quotes an art history textbook by Gisela M. A. Richter which was written in 1930!