Intentional Damage: The “Night Watch” and Temple of Artemis

I don’t like it when works of art get damaged (not by any means!), but I’m intrigued when such catastrophes occur. I’ve blogged about this topic before, discussing instances when Michelangelo’s Pietà and Malevich’s Suprematism (White on White Cross) were damaged by mentally-unstable individuals. (I’ve even decided to start an “intentional damage” label for these kinds of posts.)

I wanted to write about two works of art/architecture that have been intentionally damaged over time. The following two works of art may seem unrelated to most, but they are connected in my mind: I learned more about the damage done to these works during my recent trip to Europe. I had an extended layover in Amsterdam and got to visit the Rijksmuseum (where I saw Rembrandt’s The Night Watch) and finished my trip in Selçuk/Ephesus, where the Temple of Artemis is located. 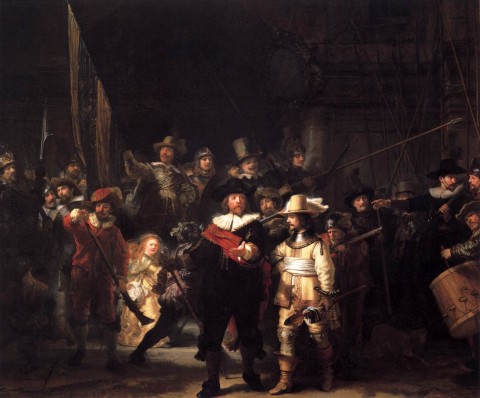 When visiting the Rijksmuseum, I was reminded that “The Night Watch” was greatly damaged in 1975, when a mentally-unstable school teacher, Wilhelmus de Rijk, slashed the painting with a bread knife. You can see some of the initial damage in the following YouTube clip. Don’t those slashes just pull at your heart strings?

Although the 1975 incident is the most famous example of damage to Rembrandt’s masterpiece, there are actually a few other times in which the “Night Watch” has been attacked. An unemployed shoemaker slashed the painting during World War I, to protest his inability to find employment. (Which is so ridiculous! Who would want to hire someone who just slashed a priceless painting?)1 In April 1990, it was reported that a jobless Dutchman sprayed an unknown chemical substance (later determined to be acid) on the painting, but luckily the damage was minimal. (Note: The Rijksmuseum’s site also mentions that the painting was sprayed with acid in 1985, but I think that this date is actually referring to the 1990 event.) 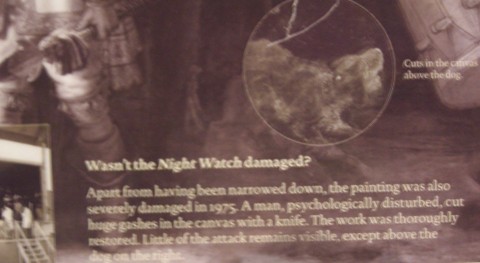 Detail of "Night Watch" text label from Rijksmuseum, showing the area where evidence of the 1975 damage is still seen on the painting

The other intentionally-damaged art that I recently learned about is the Temple of Artemis, near Ephesus. Before my trip, I already knew that this structure (which was one of the Seven Wonders of the Ancient World) is now a ruin (see below).2 However, I didn’t realize that this structure was burned in 359 BC, by an allegedly mentally-unstable person named Herostratos (also spelled Herostratus) who hoped to make his mark on history.3 Interestingly, this fire was also said to occur on the same night that Alexander the Great was born. Although there isn’t a way to verify that the fire took place on this exact date of July 20th or 26th (beyond what is mentioned in historical writings), archaeologists have noted that the some ruins from the site bear traces of fire.4

Herostratos was executed for his crime, and the Ephesians also created a decree to ban the mention of the Herostratos’s name. Obviously, the ban was not followed, since the story has been recorded by historians like Theopompos of Chios.

Parts of the ruined temple later were used to help build the nearby Basilica of Saint John. So, I guess, in some ways you can go and see some of the Temple of Artemis when you are in Selçuk, although the materials have been reconfigured to help form a different religious structure! 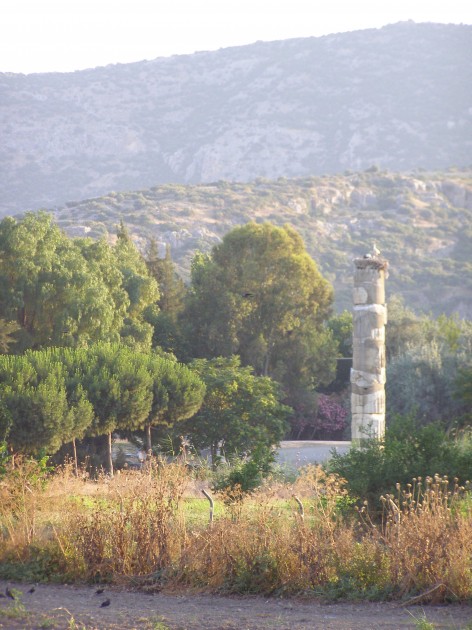 Ruins of the Temple of Artemis at Ephesus (modern Selçuk), Turkey (begun 8th century BC)

In November 2011, plans were announced to build a $150 million reconstruction of the Temple of Artemis. I didn’t hear anything about this reconstruction while I was in Turkey, which makes me wonder if the project received funding. If the temple does get rebuilt, though, we’ll need to make sure that arsonists stay away!

Want to read about more damaged art? Artdaily has compiled a good list. Do you know of more examples of intentionally-damaged art? Does anyone have a thought as to why mentally-unstable people would be drawn to damage art (as opposed to something else)?

1 In many respects, Rembrandt’s painting is actually “priceless.” Although the members of the civic guard paid Rembrandt 1,600 guilders back in the 17th century, there is no other price attached to this piece. The museum does not insure the painting (it is in loan from the city of Amsterdam), in accordance with Culture Ministry policy.

2 Several temples were built on this site over time. A few reconstruction of the temple are found HERE and HERE.

3 Albert Borowitz, Terrorism for Self-Glorification: The Herostratos Syndrome (Kent State University Press, 2005), 4 – 19. Citation can be viewed online HERE. This citation also follows the historiography of a allegation that Herostratos burned the Temple of Artemis on the same night that Alexander the Great was born.