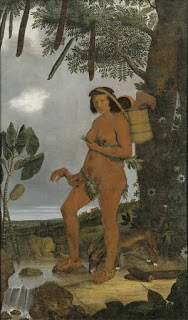 Almost exactly five years ago, I gave my first research presentation in a graduate seminar. This seminar was dedicated to Northern Baroque art, and I chose to write on the Dutch artist Albert Eckhout. However, even though Eckhout is Dutch, I am mostly interested in the paintings he created while living in Brazil. The Dutch established a colony in Brazil (called “The New Netherlands”) in 1636, and the following year Eckhout traveled to the new colony as a commissioned artist. The governor-general of the colony, Johann Maurits, wanted Ekhout (and fellow artist Frans Post) to work as documentarists and paint the flora, fauna and indigenous people of the area. As part of the work, Eckhout painted eight portraits of the different indigenous people in the area, including Tupi Woman (c. 1641-44, shown right).

However, in my graduate presentation, I argued that even though Eckhout was hired as a “documentarist,” he doesn’t visually record the native people with a dispassionate eye of scientific observation. Nor do I think that these portraits were displayed as scientific images. Instead, I see these Brazilian portraits as a symbol of conquest. For one thing, Governor Maurits chose to display these portraits within his Vrijburg palace in Dutch Brazil. Maurits not only “owned” the subject matter within the painting, but the native people were therefore captured, defeated, and regulated to the walls of the palace.

Furthermore, Eckhout continually emphasizes the “Otherness” of the subjects of his Brazilian portraits. These portraits encourage the viewer to understand and define them on a basis of comparison against Western culture. As can be seen in his Tupi Woman, Eckhout is interested in emphasizing the cannibalism and nakedness of this native group. Ethnic stereotypes can be seen in the other portraits too. The Mameluke Woman (c. 1641-44, shown left) is depicted as a coquettish concubine in garb that is quite non-European (not only with the loose fitting dress, but because she apparently isn’t wearing a girdle or underclothing). Her raised dress and exposed leg suggest the sexual “profitability” of native people to the conquering Dutch. In fact, these mameluke women (a mixture of Indian and European blood) were stereotypically seen by the Dutch as being promiscuous and sexually available.

I’m not going to outline the rest of my argument here, since I assume people can catch the gist of my interpretation. The reason why I am writing this post, however, is to flesh out a thought in relation to the scale of these paintings. (For some unknown reason, this thought unexpectedly popped into my head as I was washing dishes last night.)

These portraits are created on a large scale (they are life size), which could imply that Eckhout was attempting to elevate and honor the Brazilian natives in his paintings. In fact, my professor suggested as much when she critiqued my graduate presentation. She also pointed out that the trees in the background form a makeshift “cloth of honor,” a visual tradition found in other Northern European portraits of nobility. Although I can see how one could interpret these aspects positively, I think that an opposite stance can be taken. I think that the grand scale and “cloth of honor” actually magnify the “Otherness” of the sitters. The Tupi woman is not only naked, but she’s really naked. She’s large-scale naked. And she doesn’t really get a “cloth” of honor, does she? Instead of luxurious red velvet, this woman is shown in front of a native tree which furnishes imposing, machete-like pods.1 I’m not sure if that is really ennobling. I think the uncomfortable juxtaposition of Western traditions (the grand scale painting with an impromptu “cloth of honor”) with non-Western subject matter makes the “Otherness” of the subjects even more apparent.

What do others (and Others!) think? Do you think that the grand scale and “cloth of honor” serve to ennoble these indigenous portrait sitters? Why or why not?

1 I should point out that trees previously had been used as natural “cloths of honor” in Northern Baroque art (consider Van Dyck’s portrait, Charles I at the Hunt (1635)). In the Charles I portrait, however, Van Dyck doesn’t try to draw much attention to the tree. Instead, the tree is mainly used as a framing device. I think this is different from Eckhout’s portraits, who takes pains to emphasize the non-Western nature of the plant life.

**When pulling together my previous research for this post, I also stumbled upon a book that was written in 2007 (one year after my graduate school presentation). I’m very curious to read Rebecca Parker Brienen’s book, Visions of Savage Paradise: Albert Eckhout, Court Painter in Colonial Dutch Brazil. From what I can tell online, she and I are interested in the same topics and interpretations for this piece. Like Brienen, I think that Eckhout’s work is “informed by sexual as well as ethnic stereotypes.” We must have been researching these ideas around the same time. Fer Hegel’s Geist! You can see a preview of Brienen’s book here.