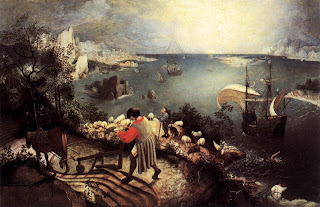 On Wednesday I had a student point out something in a painting that I had never noticed before (I love it when this happens!). We were discussing Pieter Bruegel the Elder’s The Fall of Icarus (c. 1558, shown left), and I was mentioning how this painting’s subject matter appears to be influenced by several different literary sources. For one thing, Bruegel’s depiction of the scene follows the Icarus story described in Ovid’s Metamorphosis, which mentions a fisherman, peasant at his plough, and a shepherd.1 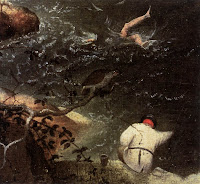 Given that Bruegel was strongly influenced by oral tradition, it also seems likely that this painting refers to the popular proverb, “No plough stops for the dying man.” Up until Wednesday, I have always thought that Icarus was the “dying man” shown in the painting (notice Icarus’ flailing legs as he falls into the sea). However, it looks like Bruegel included two dying (or dead!) men in this scene, perhaps to really emphasize this popular proverb. 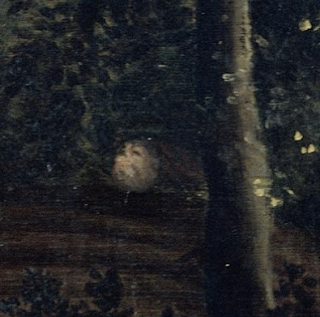 Crazy, huh? After noticing this corpse, I decided to do a little research and find out what scholars had say on this topic. Lyncle de Vries discusses how the inclusion of this corpse emphasizes a message about brevity of life.2 This interpretation makes sense, and ties into my idea that Bruegel wanted to reference the popular proverb that I mentioned earlier. 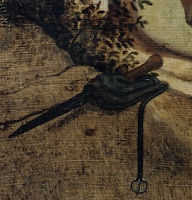 I also am interested in an idea that was discussed by Robert Baldwin. He mentions how the corpse and sword (which is placed in the foreground of the painting, on the right side of the canvas (see detail on left)) is an allusion to the Christ as the “Prince of Peace.” These two details may reference the biblical prophecy regarding the beating of “swords into plowshares.” Baldwin points out that similar Netherlandish imagery existed that contrasts the soldiers of death (perhaps referenced here by the corpse) and the plowman of life.3

Another interesting argument is proposed by Karsten Harries, a philosopher. Harries sees this scene as an allusion to the biblical story of Cain and Abel. Cain, who was a “tiller of the ground,” murders his brother Abel, a shepherd. Not only could Abel’s body be depicted in the bushes, but Harries posits that the shepherd in the middleground might also represent Abel.4

Which interpretation do you like? I think that several (if not all) of these interpretations can coexist; Bruegel appears to have wanted this painting to have multiple references. Are you familiar with any other interpretations for Bruegel’s corpse in the bushes? It’s too bad the Bruegel didn’t leave any writings for historians to reference; it would be nice to know his thoughts on the matter. Unfortunately, we’re left on our own to interpret this painting, since “dead men tell no tales.”

1 Kim Woods, “Pieter Bruegel the Elder and the Northern Canon,” in The Changing Status of the Artist by Emma Barker, Nick Webb and Kim Woods, eds. (London: Yale University Press, 1999), 181-82.