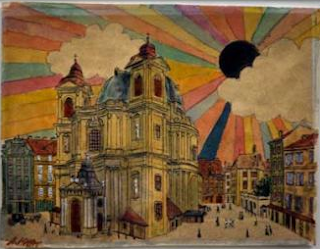 Today one of my students was telling me about a comparatively recent exhibition by brothers Jake and Dinos Chapman. Titled If Hitler Had Been a Hippy How Happy Would We Be, the exhibition ran at the White Cube gallery during May 2008. In preparation for this show, the Chapman brothers bought several watercolors by Hitler. Then, the two brothers painted the backgrounds of Hitler’s watercolors with rainbows, smiley faces, floating hearts, and psychedelic skies.

This idea of appropriating the work of another artist is nothing new to the contemporary art scene. When hearing about this exhibition by the Chapman brothers, I was immediately reminded of John Fekner’s X Americana X series (1985), in which Fekner painted over “found” kitsch paintings. 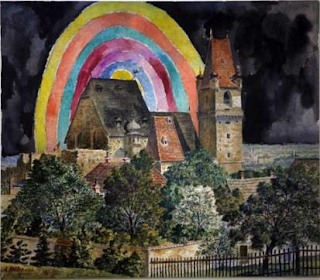 But this exhibition by the Chapmans is different than Fekner’s series. Why? Well, because it’s Hitler’s art. The Chapman brothers insist that they are not trying to profit from Hitler’s notoriety with their exhibition, but simply try to explore Hitler’s psychology. Personally, I think that first claim is ridiculous. Of course these artists are trying to get attention and profit because of the connection with Hitler – there’s no way around that fact. If they were purely interested in the “psychology of the artist,” I think they could have explored that idea without publicizing Hitler’s name. Granted, Hitler does need recognition for his contribution to the show. And yes, the psychological connection with Hitler is terribly interesting. But one can consider the “psychology of the artist” with pure visual elements, without knowing who created the work of art.

As you can imagine, this exhibition caused quite a bit of controversy. Some find Chapman’s work to be unethical and unrespectful, while others feel like Hitler’s art deserves to be defaced. You can get a sense of some previous discussions on the topic here.

Personally, I don’t have a problem with these paintings being “tweaked” by the Chapman brothers. (But I know this reaction is because I’m not that excited about Hitler’s artwork in the first place.) I would have been bothered if Chapmans additions had defaced the bulk of Hitler’s compositions and figures, but that doesn’t seem to be the case. The work of the original artist is still there, but the context and meaning has changed.

What do others think?