Dürer’s "Virgin Among a Multitude of Animals" 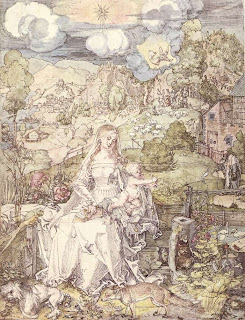 School is wrapping up for the quarter, and my eyes are tired of looking at dozens and dozens of student papers. This evening I thought I’d have change of scenery by looking at a watercolor that I discovered recently: Dürer’s Virgin Among a Multitude of Animals (1503, shown right). Isn’t it lovely? Here are a couple of thoughts about the painting:

Dürer’s painting is fun, isn’t it? Which animal do you like the best? I particularly like the parrot that is perched on the left side of the Virgin.