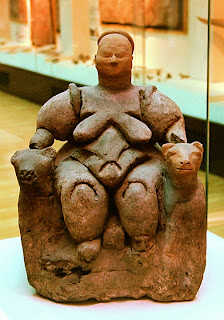 Yesterday I was doing a little research on a female figurine from Çatal Höyük.  This figurine (shown right), dates from the 7th century BC.  It was excavated in the 1960s by James Mellaart, who argued that this figurine (and the other female figurines found on the complex) are proof that a matriarchal society and goddess cult existed at Çatal Höyük.  However, today archaeologists are questioning Mellaart’s goddess argument.  Michael Balter points out that Mellaart developed his goddess theory in the 1960s, just when feminist movements were beginning across the world.  I think it’s likely that Mellaart was influenced by his own cultural surroundings (and perhaps a desire to capture the interest of the general public?) when he came to conclusions about a Neolithic goddess cult and matriarchal society.

There are other reasons why scholars doubt Mellaart’s conclusions.  One of the main reasons is that there is actually very little evidence of a goddess cult.  Along these lines, relatively recent excavations have found close to 2,000 figurines at Çatal Höyük, and most of them are not female figurines.  Actually, as reported here, less than 5% of the figurines could be considered female.  Most of the figurines are representations of sheep and goats.

So, what was the function of these small figurines?  Some scholars think that they could have been used as teaching aides or educational toys!  It appears that these figurines were carried around and then discarded (these figurines were discovered in the Stone Age trash).  Prof. Lynn Gaskell (Stanford University) is quoted in this article saying, “These are things that were made and used on a daily basis.  People carried them around and then discarded them.” Basically, these figurines could have been the prehistoric version of action figures!  Here are a couple of figurines discovered at the site: 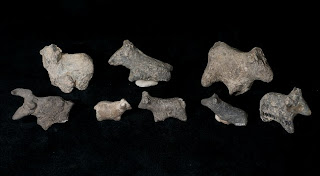 I think that this is a really interesting and fun theory, although I have some doubts.  Just like Mellaart’s theory might have been influenced by the onset of the feminist movement, couldn’t this toy theory also be influenced by our 21st century mindset?  Just because children play with action figurines today (and because we throw toys away when they are broken or abandoned), how do we know that Neolithic people acted the same way?