Vasari writes that Fra Filippo Lippi made a conscious decision to stop including a lot of hands in his paintings. Apparently, Lippi had been criticized for including too many hands in his compositions, and someone advised him to be aware of that fact.1 Lippi received this sound advice around 1445, and Vasari writes that in later paintings Lippi “covered [the hands] up with draperies or some other invention in order to avoid such criticism.”2

In some ways, you really can see a switch from the “hand” to “hand-free” Lippi. (Okay, in truth, his later paintings aren’t “hand-free,” but often there aren’t as many hands.) Here are some earlier, “handy” paintings:

St. Fredianus Diverts the River Serchio, c. 1438
There are way too many hands in the group on the right. And look at the man who is standing on the left side of that group – his hands are awkwardly included in the composition to the point of distraction. It almost looks like that man is going to box the ears of the pious man who is kneeling down. 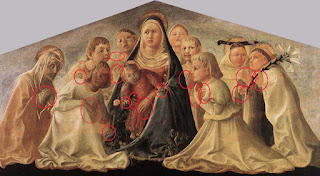 Madonna of Humility (Trivulzio Madonna), c. 1430
(with red circles added – click here to see a reproduction without circles)
I think this painting is pretty ugly, and the plethora of hands doesn’t help the composition one bit. I circled sixteen different hands. Granted, there are a lot of figures in this painting, but sixteen hands seems a little extreme and unnecessary. Hands pop out in some of the strangest places, too. Check out some of the hands on the left-side of the Virgin.

Lippi’s post-1445 (ahem, post-“handy”) works still include hands, although he often (but not always!) toned down the number of hands and was a little more tactful. Detail of Disputation in the Synagogue, 1452-65
Notice how Lippi covered up the figure on the left’s hands with drapery? Smart move. There aren’t any miscellaneous fingers or palms sticking out anywhere, either, which is an improvement. Detail of St. Stephen is Born and Replaced with Another Child, 1452-65
Lippi toned down the hands a bit in here – Stephen’s mother covers up one hand with her head, and the seated woman covers up a hand with her knee (although I think her other hand is awkward in its position and placement). And you don’t even see the hands of the figure behind the bed. I think, though, that the woman on the left’s hand is poking out from behind her cloak – it’s a little awkward since its the only part of the woman that we can see, but hey, this is an improvement for Lippi.
Do you know of a “handy” or “hand-free” work by Lippi? What do you think – did Lippi improve by toning down his inclusion of hands? I certainly think so.