I have been thinking a lot about Vermeer’s The Milkmaid (c. 1660) lately, mostly because of the publicity given to the current special exhibition at the Met. The last time The Milkmaid was on display in the United States was the 1939 World’s Fair. Curator Walter Liedtke has given this painting a very unusual and provocative interpretation, which I first learned about on a recent post by Lee Rosenbaum (CultureGrrl). You can read Liedtke’s discussion here, and also listen to a short radio interview with Rosenbaum here. Liedtke thinks that the milkmaid can be interpreted in a more suggestive light, partially because of the inclusion of a foot warmer (a popular symbol for arousal in Dutch 17th century art) and the image of Cupid (on the tiles next to the foot warmer, shown above).

When I first heard of this interpretation, I guffawed and immediately thought of this newspaper cartoon that appeared in 1907: 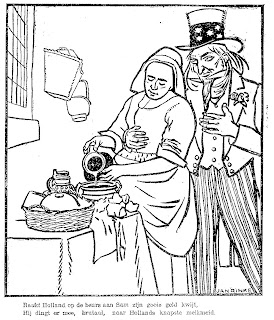 This cartoon appeared in the Dutch publication, Het Vaderland. It was drawn at a time when Vermeer was gaining a lot of international attention. Prices had become so high for “Vermeers” that only American millionaires could afford to buy them. For example, Henry Clay Frick bought three Vermeers for his personal collection and home (which is now a museum in New York). The Dutch began to be concerned that The Milkmaid, which had been in the collection of an Amsterdam family for almost a century, would also be bought by the Americans. This idea of Americans snatching up all of Vermeer’s paintings is embodied in this part of the cartoon, where Uncle Sam is courting “Holland’s best-looking milkmaid.”1

Anyhow, I keep thinking about this cartoon and Liedtke’s interpretation. With an American art historian interpreting the maid in a more sexual light, it now seems as if Uncle Sam is making a sexual proposition in the cartoon. (Yikes!) I wonder what Dutch scholars are going to think of this new theory. Maybe they’ll think that Liedtke Uncle Sam is a scuzz bag.

Or maybe not. In all honesty, though, I have found Liedtke’s theory to be interesting and semi-compelling (despite my initial reaction). I have never noticed the milkmaid’s foot warmer before, but I have seen foot warmers in a lot of other Dutch paintings. At just about the same time that Vermeer painted The Milkmaid, Jan Steen included foot warmers in many of his moralizing paintings, like The Lovesick Maiden (c. 1663-65) and The Doctor’s Visit (c. 1660). Here, the morality of the young girls are called into question by the presence of foot warmers (which suggest arousal because a girl is warmed underneath her skirt). Although Vermeer may have included the foot warmer to create a realistic scene (Henry Rand argues that the foot warmer indicates that the milkmaid’s “kitchen is not properly heated”), I think it is probable that there is symbolic significance.2 After all, Vermeer included symbols in his other paintings, so The Milkmaid is probably not an exception.

What do other people think about Liedtke’s interpretation? Is the milkmaid naughty or nice? Do you think people will get upset with Americans for desecrating this popular symbol of the Dutch Golden Age? Maybe we’ll have to wait another seventy years (or longer!) before the Dutch will let us borrow one of their masterpieces again.

1 Emma Barker, Nick Webb, and Kim Woods, eds., The Changing Status of the Artist, (London: Yale University Press, 1999), 214. Ultimately, the Dutch government voted for funds to acquire The Milkmaid, so that the painting would stay in Holland. To see the other half of the cartoon, in which the milkmaid decides to choose a Dutchman as her suitor, click here.

2 Jonathan Janson, “What is the Milkmaid Cooking?” available from http://www.essentialvermeer.com/catalogue/milkmaid.html; Internet, accessed 15 September 2009.