The Bayeux Tapestry and Halley’s Comet

The Bayeux Tapestry (ca. 1070-80 AD) is really impressive, not only in size, but also because of the figures and details depicted in the work. This immense strip of linen (it is 230 feet long!) depicts the Norman conquest of England in 1066. This tapestry is a great resource for historians to learn about Romanesque/early medieval life, clothing, architecture, armory, towers, churches, etc. And seriously, what a great resource – there are 1,515 objects, animals, and figures depicted therein!

It is pretty common for art historians to emphasize that the Bayeux Tapestry is not a tapestry. In actuality, it is an embroidered work. (But I’m going to call it a tapestry in this post, just for consistency with the title.) Legend has it that Matilda (William the Conquerer’s queen) performed all of the needlework, but this has never been proved and is highly unlikely.1 It is generally thought, though, that the needleworkers were either Norman or English women. So let’s give three cheers for one of the earliest extant examples of female artists! Hip hip hooray!

I have a couple of favorite scenes from the Bayeux Tapestry. One favorite is the funeral procession of Edward the Confessor (shown above). It was Edward’s death in 1066 that sparked the whole conflict with the Normans. The Normans believed that Edward had chosen William of Normandy as the heir to the throne, but the crown went to Harold, earl of Wessex (the king’s brother-in-law, who had already sworn allegiance to William). Anyhow, I really like this scene because of two reasons: 1) the finger of God pointing out of the sky towards Westminster Abbey, the church where Edward was buried and 2) the inclusion of Westminster Abbey itself. The abbey was consecrated on 28 December 1065, just a few days before Edward died. You can tell that the needleworkers took a lot of pains to record the architectural features of this new building.

My other favorite scene shows Halley’s comet. Yep, that’s right: Halley’s comet! You can see a group of messengers pointing out the appearance of the comet in the scene below: 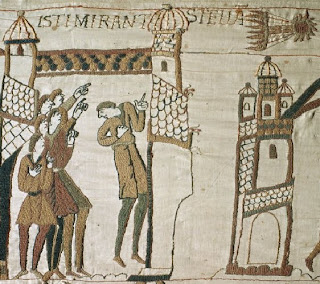 It’s a pretty fun depiction of the comet too, huh? I think it’s especially interesting that this scene appears out of chronological sequence with the other events in the tapestry. The comet is shown just after the scene that depicts Harold’s coronation, when in actuality the comet appeared about four and a half months later. The inclusion the comet at this point in the tapestry, though, was meant to display divine judgment and foreshadow the impending evil which would follow Harold’s perjury.2

How cool is it that a comet appears in Romanesque art? Apparently, in 1986 there was a conference in Bayeux which discussed the 1066 comet and its interpretations.3 I wish that I could have been there (and would have been old enough to appreciate what was discussed!).