Intro to Ancient Near East: Akkad

It’s been a while since I posted any introductory posts. I thought I’d briefly write about one of my favorite stelae from the ancient Near East period, the Victory Stele of Naram-Sin (shown below, 2254-2218 BC).

The Akkadians were a group of people which took over Sumer in 2334 BC. The Akkadians spoke a Semitic language but used cuneiform (the Sumerian writing system) for their written documents. What I think is most fascinating about the Akkadians is their ideological shift in regards to divine rulers – halfway into the long reign of Naram-Sin (r. 2254-2218 BC), this king 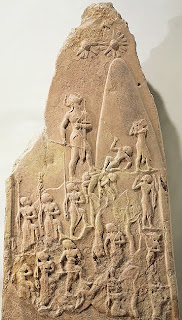 decided to heighten his political status by assuming divine status as well.1 There is visual evidence of this ideological shift on the Victory Stele of Naram-Sin, for the king is depicted wearing a horned headdress, a feature which was “formerly the exclusive prerogative of the gods.”2

This pink sandstone stele is my favorite piece of Akkadian art. It is one of the first pieces of art to depict an actual historial event; the stele commemorates Naram-Sin’s victory over the Lullubi people.

Hierarchy of scale is used in this composition, which means that the most important figure (in this case, Naram-Sin), is shown bigger than anyone else. Naram-Sin is walking up the mountainside, with his smaller soldiers marching behind him. If you look closely, you can see that Naram-Sin is treading on top of two fallen Lullubi soldiers.

The thing I like most about this stele are the stars depicted at the top. There are only two stars shown because the top of the stele is damaged, but it is thought that at least three favorable stars shown on the king. I read a footnote here which mentions that once there may have been seven stars on this stele.

I’ve had professors posit different ideas about these stars. Some think that the two depicted stars represent the dieties Shamash (the primary diety for the Akkadians) and Ishtar (the goddess of love, marriage, beauty and war). Therefore, the inclusion of these stars could indicate the gods’ favorable view of Naram-Sin. It also could be that Naram-Sin is walking up the mountainside in order to make a sacrifice to the gods, thanking them for his victory (which further propagandizes that Naram-Sin has divine support). This theme (the relationship between rulers and diety) is familiar in ancient art, which makes me think that this theory has some creedence. But if there were other stars depicted on this stele, which gods did they represent? How can we ensure that the attribution of gods to stars is not arbitrary?

I’ve had another professor who wondered if these stars could represent an actual cosmic event that took place during the battle or victory. I think this is a really interesting thought, though I don’t believe there is any extant evidence to support this idea. It’s kind of fun to think about, though. Since this stele was one of the first pieces of art to depict a historical event, it’s fun to think that historical accuracy extended to a depiction of what the stars looked like.

What do you think about these stars? What’s your favorite part about this stele?