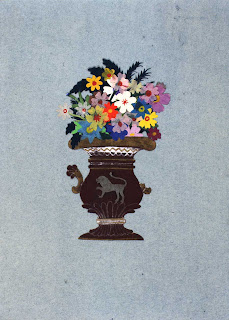 It’s fun to find out that a famous musician/writer/playwright/poet/actor also liked to create visual art. It makes sense that creative minds like to have more than one artistic outlet. My friend Miss B just pointed out that the writer Hans Christian Andersen was also an artist – he made paper cuts (one example, Bouquet (n.d.) is shown on the left). They’re quite fun. You can see more examples of Andersen’s paper cuts on Miss B’s post, and you can also see the Royal Library’s extensive collection here.

I knew that Andersen had a lot of diverse interests, but I didn’t know that he dabbled with the visual arts. Apparently, Andersen was a very popular paper cutter. He would make these cuts to amuse friends and their children. Andersen would work on a paper cut when storytelling,and then end the tale by opening up the paper cut and showing the final product to his audience.1

I really like the Odense City Museums’ interpretation of Andersen’s fascination with paper: “To Hans Christian Andersen paper was not meant to be media for the written word only. Paper – it seems – represented the basis for his imaginative expressing. Through out his life Hans Christian Andersen was an addict to paper. He wrote on it, he drew on it – and he used it to cut in.”2

Now I’m interested in learning more what Andersen’s writing and editing style was like. Would he constantly edit and deconstruct the papers that he filled with words, just like he frequently cut away bits of paper to make visual art?
1 Odense City Museums, “Papercuts by Hans Christian Andersen”; available from http://museum.odense.dk/andersen/klip/billedstart.asp?sprog=engelsk; Internet, accessed 1 July 2009.