According to ancient legend, the flesh of the peacock is incapable of decay. Yep, that’s right. It was thought that a peacock’s body would never rot. It would be really cool if this was true, but it isn’t. This myth was propagated by early writers (see here for an interesting example in Augustine’s City of God).1 As a result of this myth, the peacock has been associated with immortality in Christian art. Furthermore, because male peacocks shed and regrow their plumage each year, the peacock also is associated with resurrection. 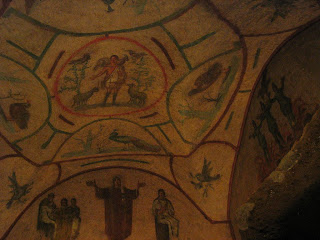 Peacocks have appeared in Christian art for centuries. Some of the earthen lamps used by early Christians were decorated with peacocks.2 One of the earliest paintings of a”Christian” peacock decorates the ceiling painting in the catacomb of Priscilla* (3rd century AD, Rome, Italy; the peacock is located in the lunette above the “Life of Priscilla” scene). Since catacombs were the tombs for early Christians, it is appropriate that a depiction of a peacock be included here, due to this assocation with resurrection and immortality. I think it is especially interesting that the peacock is located near a depiction of Christ, since Christ is also associated with resurrection and immortality (Christ is shown as the Good Shepherd in the central, circular frame).

Thousands of years later, in the Renaissance, Fra Angelio and Fra Filippo Lippi still included the peacock in their religious art (this is a detail from the Adoration of the Magi, c. 1440/1460). Perched on the stable above the Christ child, the peacock watches the wise men bring gifts to the baby. As a complement to the gold, frankincense, and myrrh, the peacock symbolizes the gift of immortality that is offered by Christianity.3

I know that peacocks have both positive and negative associations in other contexts and cultures. In America, it could be argued that peacocks are most commonly associated with vanity. I think it’s fun to look at peacocks in a different light, as a symbol of immortality.

1 To see some other examples of early writings (and a great image of a peacock from a medieval bestiary, see here).

3 A complete view of the painting (and more information about it) can be found here.