Although Odilon Redon is best known for his fanciful, pre-Surrealist works like The Cyclops, I am particularly drawn to his still-lifes of flowers in vases. I’m actually quite surprised by this, because I am rarely attracted to still-life paintings. Last fall, when I went to visit the “Monet to Picasso” exhibition at the UMFA, this was my favorite painting in the show: 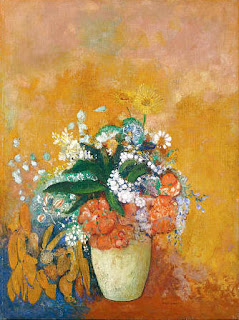 Vase of Flowers, c. 1905 (Cleveland Museum of Art)
One reason I like this painting so much is because of the background. The layers of different colors create these subtle changes in the background that are really beautiful, giving the painting a kind of ethereal quality.

In a letter to Emile Bernard, Cezanne mentioned that he “liked Redon’s talent enormously.”1 This statement has given some reason for art historians to compare and contrast Cezanne and Redon. In an essay, Rachel Frank argues that “the differences are…striking” between between Redon and Cezanne.2. Although I can agree with Frank to a degree, I see some similarities between Redon and Cezanne, primarily that both artists often apply paint in large patches of color. I especially like the “patches” on the vase (i.e. the blues, browns, whites, and blacks) of the following still-life: 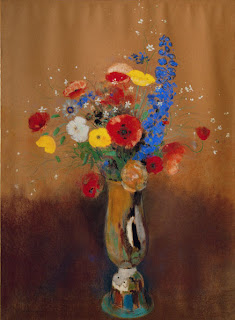 Wild Flowers, gouache, c. 1912 (Musée d’ Orsay)
Not long before Wild Flowers was painted, however, Redon remarked to a journalist that Cezanne’s influence in the art world was fading.3 Although I don’t doubt that Redon was sincere in his disillusionment with Cezanne, I still can’t help but find some similarity between the two artists’ styles. For me, I think that artists use the “patches” of color create different aesthetics. Cezanne’s patches of color are more geometric (notice the rigidity of the squares and rectangles of pigment in the lower right corner of this painting). This geometricity emphasizes the formalistic qualities of the objects portrayed. In contrast, I think that Redon’s “patches” draw more attention to the contrasts, harmonies, and subtilities of color; for me, this fanciful effect creates a more emotional response to Redon’s paintings. I think that the different effects created by the paintings ties into the reason why Redon was disappointed with Cezanne – Redon was more interested in emotion and Symbolism, whereas Cezanne was more interested in formalism. To me, it is no wonder that Redon mentioned in this same interview that he was disappointed with the “theoretical, analytical nature of Cubism” (a formalistic style with which Cezanne is often associated as a precursor).4

Nonetheless, I think that these artists mutually influenced each other during their careers. It seems difficult for artists to not be influenced (whether it be deliberate or unintentional) by their contemporaries. What do you think? Do you see similarities or differences between Redon and Cezanne’s styles?

If you like paintings of Redon’s flowers in vases, you can see more of them here.