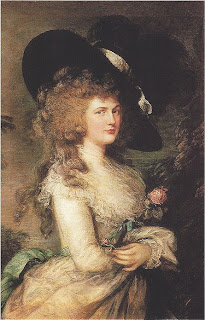 Keeping with this week’s theme of stolen art, I am particularly interested in the story regarding the portrait Georgiana, Duchess of Devonshire. This portrait was completed in 1787 by Thomas Gainsborough, a popular English portrait painter. I’m particularly interested in this painting because my grandparents own a reproduction of it (or else it’s another painting that closely mimics the style and pose of Gainsborough’s portrait – I’ll have to look more closely next time I visit).

Georgiana is the great-great-great-great aunt of Princess Diana, and there have been many parallels drawn between the two women. Both beautiful women were the toast of England during their life, although Georgiana outlived her days of high public favor. (The film “The Duchess” (2008) was based on Georgiana’s life; actress Kiera Knightly (who played Georgiana) was angered that her character was often compared to Diana).

Almost a century after the painting was completed, it was sold in 1876 at an auction. Crowds of people gathered to catch a glimpse of this famous portrait. It was eventually sold to the American banker Junius Spencer Morgan, who bought the painting as a gift for his son, J. P. Morgan. However, before the portrait was shipped to America, it remained for a while on exhibition in London.

During this short period of exhibition, Adam Worth crept into the Agnew Gallery and stole the Georgiana portrait from its location of display. Worth hoped that he could use the well-loved painting as collateral; he wanted to bargain with the government to get his brother John freed from prison. However, John’s lawyer was able to negotiate a release for the prisoner before Adam even had time to strike a bargain with the government. Consequently, Adam Worth was left with the beautiful portrait on his hands.

For the next twenty five years, Worth kept the painting. When he traveled, he would bring the Georgiana with him in a false-bottomed trunk. While at home, Worth would sleep with the beloved portrait under his mattress. Ben Macintyre writes in his book Napoleon of Crime that Georgiana was a “permanent, hidden companion” for Worth. Even when Worth experienced financial troubles and threats of capture, the theif preferred to “face disgrace, penury, and imprisonment rather than part with the Duchess.”1 Finally, near the end of his life, Worth sold the painting for an undisclosed sum and negotiated a promise of immunity.

Today, Georgiana, Duchess of Devonshire is part of the Devonshire Collection. In 1994, the current Duke of Devonshire bought the portrait and placed it at Chatsworth, his ancestral home. Edward Dolnick points out that Georgiana now “presides” in the grand dining room, the location where she held court during her lifetime.2