I’ve been thinking a lot lately about if art should be displayed and conserved to follow the “artist’s original intent.” The phrase “original intent” is used a lot by conservators, specifically in terms of describing how the conservator aims to preserve and restore exactly what the artist originally created. However, Steven W. Dykstra argues in his article The Artist’s Intentions and the Intentional Fallacy in Fine Arts Conservation (found online here) that this term is ambiguous. There are several different definitions of the word “intent.” For example, the original intent of the artist could refer to the artist’s aims for a work of art, or it could refer to the artistic outcome (which may or may not be the original artistic aim). In addition, “intent” could refer to biographical motives – the artist could be seeking fame, emotional catharsis, or the satisfaction of patrons by creating a work of art.1 Often, we don’t even know what any of the possible intents of the artist may have been. 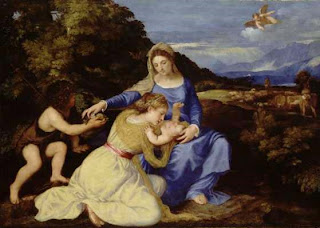 The art historian Gombrich discussed original intent in connection with a controversy that happened at the National Gallery. Before an exhibition in 1947, conservator Ruhemann and his team used new positivist scientific methods to clean some paintings. There was a mixed reaction to the results of the cleaning. Gombrich and his followers felt that a scientifically driven method for cleaning did not allow for artistic or historical consideration.2 Ruhemann, however, felt that conservation techniques naturally followed artists’ intentions as a guiding principle.3 Gombrich disagreed (which I think ties into the ambiguity of the word “intent”). In an indirect reference to the cleaning of Titian’s painting Virgin and Child with Infant Saint John and a Female Saint or Donor (c. 1532, shown above), Gombrich mentioned, “One should have thought it is common ground that Titian is dead and that we cannot ask him what his intention was.”4 To finally retalliate to Gombrich’s accusations, Ruhemann’s followers came up with a mocking (and clever!) pun, accusing Gombrich’s camp of having a fascination with “dirty” pictures.5

What do you think about the phrase “original intent”? Can conservators (or connoisseurs, for that matter) determine the original intent of an artist? Is it important to try and learn about or follow the intent of the artist, whatever it may be? Does the artist’s intent even matter? (Postmodernists likely would argue “no” to that last question, but I’m not sure how I feel about that.)

I guess I’m thinking a lot about this lately because of my last post, where I complained that reproductions of Monet’s water lily paintings are used as decoration in college girls’ bathrooms. I still think that’s inappropriate; I would never do it. But now I’m starting to wonder what Monet’s specific “intent” may have been.

1 Steven W. Dykstra, “The Artist’s Intentions and the Intentional Fallacy in Fine Arts Conservation,” Journal of the American Institute for Conservation 35, no. 3 (Autumn-Winter 1996) : 205.