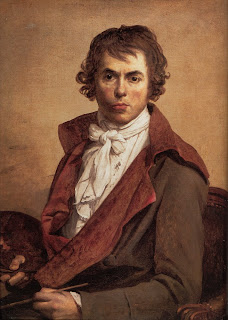 Jacques-Louis David was the most influential Neoclassical painter; he also was arguably the most influential painter of the 18th century (and subsequently the 19th as well). Earlier in David’s career, he was actively involved in the French Revolution. Many of his earlier paintings contain political subjects, which speak as a propagandistic call to arms (e.g. Oath of the Horatii) or glorify the martyrs of the cause (Death of Marat shows the assassination of Jean-Paul Marat, who was killed in his bathtub by Charlotte Corday). In 1791, David began sketches for a commemorative painting of The Tennis Court Oath, 20th June, 1789, which was the historical event that launched the Revolution. In 1792 David was elected as a Deputy of the Convention; he became closely allied with rebel leader Robespierre.

Later, when the Republic fell and Robespierre was executed, David was imprisoned. This self-portrait on the right (1794) was painted while David was in prison. The large bulge on David’s left cheek is a swollen, benign tumor which resulted after a fencing accident as a youth (He was known as “Gross David with the swollen cheek” by his English enemies).1 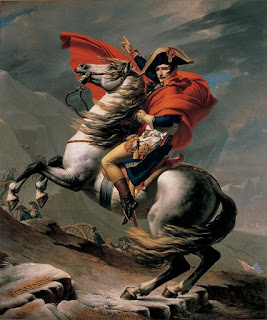 “Following his release from prison, David declared that he would no longer follow men, he would follow principles. This indicated a desire to steer clear of controversial subjects.”2 I wonder if David’s political convictions (or “principles”) also changed during his imprisonment. Not long after David’s release, he painted a portrait for Napoleon. Over time, after Napoleon rose to power, David became the court painter for the empire. Simon Shama remarks how David’s career ends in “debased self-parody. The painter who invented a story to refute the charge that he’d dallied with a portrait commission for Louis XVI was happy to do Napoleon over and over and over.”3 (Above is one of David’s portraits of the emperor, Napoleon Crossing the Alps at the St. Bernard Pass, c. 1800-01).

After Napoleon briefly met David for his first portrait sitting, David declared, “Bonaparte is my hero.” Why did David, who used to be an active revolutionary, suddenly switch to become Napoleon’s adoring fan? Simon Lee describes David has having come under Napoleon’s “spell.”4 Historical writings and biographies describe Napoleon as charming and captivating.5 Was David so struck by Napoleon’s charm and charisma that he forgot all of his earlier political convictions? Or did David just pander to whoever was in power at the time, either as a literal or financial tactic for survival?

I assume that both Napoleonic charm and survival tactics played into David’s devotion to the emperor. It seems, however, that this might not have been such a wise choice. In 1816, after the fall of Napoleon, the artist was exiled and spent the rest of his days in Brussels.6 Perhaps David should have stuck with his earlier convictions and left Napoleon alone?

1 David also had a stammering problem and his speech was difficult to understand. It is interesting that someone whose painting is so expressive had difficulties with simple speech.
2 Simon Lee. “David, Jacques-Louis.” In Grove Art Online. Oxford Art Online, http://www.oxfordartonline.com.erl.lib.byu.edu/subscriber/article/grove/art/T021541, accessed 13 January 2009.

6 In 1989, Belgian authorities prevented David’s remains from returning to Paris.