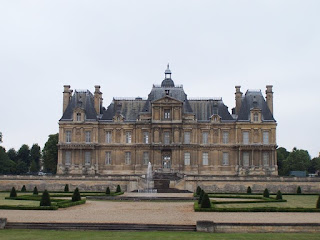 When I was researching information for my recent Bernini post, I came across an interesting anecdote regarding Bernini’s opinion of the French architect François Mansart. The only recorded time that Bernini left Rome in his adult life was in 1665, when he was invited by Louis XIV to present a design for the Louvre palace (Bernini’s plan was ultimately rejected). Bernini found fault with everything in Paris, and mockingly compared the Parisian chimneys and skyline to a wool-carding comb. Bernini also said that all of Paris was worth less than a painting by Guido Reni. However, out of all of Bernini’s criticisms, he was able to muster some compliments for the architect François Mansart – but he couldn’t help but note that Mansart would have been much greater if he had lived in Rome.1

François Mansart championed the use of the mansard roof (also called simply “mansard”); although the architect did not develop the mansard roof, it is named after Mansart (although a corruption in spelling) due to the architect’s popularization of it.3 Mansards typically are a type of pitched roof that has two slopes on each of the four sides (although Mansart also also developed a three-pitched variety which was not used by other architects).4 The bottom slopes are set at a steep slope, whereas the upper slopes are at a slight incline. These two different slopes allow for maximum space for the attic interior, which accounts for why the roofs were so popular – an extra level to the structure could be added without distorting the classical proportions of the facade. Mansards are also often decorated with an oblong, flat top.5

Aren’t mansard roofs wonderful? For me, mansard roofs are one of the things which typify Paris. If I ever lived in Paris, I would have to have a mansard over my head.