Thoughts on the Portinari Altarpiece 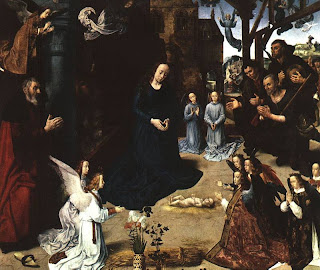 I’ve been reading a really interesting article on the Portinari Altarpiece lately.1 The Portinari Altarpiece has been determined by earlier art historians (such as Panofsky) to contain iconography related to the Eucharist and Passion. For example, the stalks of wheat in the foreground of the central panel (shown above) are a reference to the Eucharistic bread. In the article I have been reading, Miller discusses how the actual scene of the Nativity can also be interpreted as a metaphor for salvation. She writes,

“Not only did the Nativity represent the Incarnation of the Savior but, in popular legend, the delivery itself was miraculous: it preserved Mary’s virginity and was also exempt from the usual fears, pains, and dangers of ordinary human parturition. This exemption helped to confirm the Virgin’s position as reversing Eve’s role in Original Sin, and in this way the miraculous birth could have stood as a potent metaphor for salvation.”2 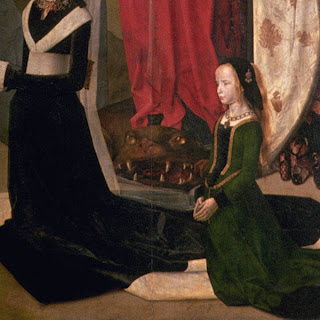 The article discusses references to birth, such as the inclusion of Saint Margaret, the patron saint of childbirth. Margaret is placed on the right panel of the triptych. I never noticed this before, but there is a dragon placed at the saint’s feet for her identification! Has anybody else missed seeing that before?

A large part of Miller’s argument ties into the hospital setting for this altarpiece; she finds that elements included within this altarpiece would have had particular significance to the hospital patrons. In this sense, her article is similar to analyses of the Isenheim Altarpiece by Hayum and Mellinkoff.3 Miller mentions how the flowers in the foreground of the central panel of the Portinari Altarpiece were used for medicinal purposes in the Renaissance.4 The healing properties of these flowers would have been recognized by hospital patrons, who could then relate these flowers to the healing properties of Christ’s sacrifice, repentance, etc. Miller then ties her argument together by saying that miraculous childbirth is a metaphor for salvation and therefore also of healing, therefore making the subject matter of this altarpiece of interest to hospital patrons and not just iconographic details included within the work (i.e. the flowers, shafts of wheat, etc.).

I think this is an interesting and fairly convincing argument. I realize that this is a short synopsis of the article, but based on what I have written, what do other people think?

1 Julia I. Miller, “Miraculous Childbirth and the Portinari Altarpiece,” The Art Bulletin 77, no. 2, (June, 1995): 249-61. For those readers who have access to JSTOR, this article is available for reading and download.

3 Ibid., 257. See also A. Hayum, “The Meaning and Function of the Isenheim Altarpiece: The Hospital Context Revisited,” Art Bulletin, LIX, 1977, 512-13; and R. Mellinkoff, The Devil at Isenheim: Reflections of Popular Belief in Grunewald’s Altarpiece, (Berkeley: University of California Press, 1988), 89.