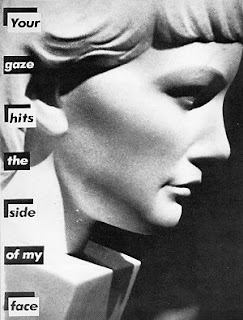 I think Barbara Kruger is a really fascinating artist. Most of her work deals with the idea of the female in art, particularly as a commentary on how culture affects the reception of the female image in art. Kruger focuses on empowering her female images as “subjects” instead of “objects.” In this image shown to the right, Kruger empowers her subject by resisting the gaze of the viewer of the work.

This resistance of the viewer’s (specifically, a male viewer) gaze is in direct opposition to how females were portrayed in art for centuries. Since ancient times, the passive female image, particularly the nude female, has served as an “object” for the active male viewer in art.1

Anyhow, thanks to two die-hard feminist art historians at my university, I was able to change my opinion. One of my favorite articles that I read in graduate school was by Laura Mulvey, entitled “Visual Pleasure and Narrative Cinema.”2 Mulvey discusses how the female image in visual culture, particularly the cinema, encourages the male voyeur. Specifically, the way that the camera functions in film encourages the voyeur, particularly in the way that the camera captures close-ups of women. (Ha – the word “captures” is really appropriate here!). Think of close-ups in an movie – they will focus on the lips, or eyes, or legs, etc. of the female actress. The actress is not viewed as an individual or human being, rather she is reduced (physically cropped on the film screen by the camera lens) and thus fetishized. 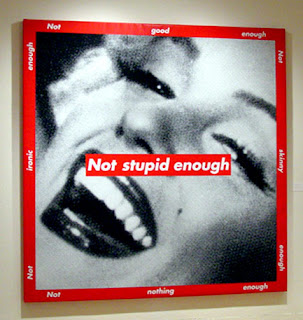 This work by Kruger exhibits well how the fetishization and “to-be-looked
-at-ness” of women occurs in the film industry (how ’bout Marylin’s super-glossy-lips! Don’t they just grab your attention!). And the same thing can be said of many other works of art. In regards to painting, I think that the invention of the photograph (which influenced “cropped” subject matter and compositions on the canvas) also helped support this idea of female reduction and fetishization. During my second semester in grad school, I wrote a paper about how some paintings by Gauguin can fall into this study of cropping and fetishization.

Mulvey’s article is really fascinating. It was probably the first article that truly convinced me that feminist art historical/visual culture studies can be a very scholarly and engaging practice. It’s not just about angst or anger – although I’m sure that one can find bitter-men-haters in any feminist paradigm, if you look hard enough…