"Masculine" vs. "Feminine" vs. "Androgynous"

This quarter I have been peppering my lectures with some discussion about women in the visual arts, following some of the ideas that Christine Havice presented in Women’s Studies Quarterly. 1 Although art historical practice and publications have changed since Havice published her article in 1987, I think that many of her suggestions are still appropriate in the classroom today.

Recently I’ve been talking with my students about Akhenaten and the Amarna period in Egyptian art (on the left is the colossal figure of Akhenaten, c. 1353-1336 BC). This topic easily segued into a discussion (prompted by Havice) about the problematic nature of the labeling an artistic style or work of art as “masculine” and “feminine.” We discussed how our 21st century idea (i.e. construct) of “masculine” and “feminine” differs greatly (or likely didn’t even exist) in prehistoric and ancient times, and by using those labels we are superimposing our cultural ideology on a work of art. All in all, using such adjectives in art historical discussions implies that a similar “masculine” or “feminine” construct existed at the time the art was created.

Sigh. And such is the challenge for art historians. I think it is often difficult to find correct (i.e. objective) adjectives and phrases to describe works of art, because we always interpret works of our through our own cultural lenses. I’d like to think that Michael Ann Holly would agree with me on this subject, since she has much lamented the melancholic separation between historians and the objects of their scholarly discussion.

So, what do we do? Search for different adjectives? Continue to describe works of art in the best way that we know how, yet recognizing the surrounding culture from whence our biases spring? We obviously can’t ditch adjectives altogether; the discipline of art history revolves around the limited translation of images to words.

I don’t know the answers to solve such conundrums regarding adjectives, but I have formed one opinion about adjectives for the Amarna style. I think it is just as problematic to try and neutralize ground between the “masculine” and “feminine” terms by saying that Akenaten’s colossal statue “suggest[s] androgyny” (sorry, Marilyn Stokstad).2 Do we know if Akhenaten was trying to appear androgynous in his art? No! Even without using the “masculine” or “feminine” label, Stokstad is trying to define this statue on sexual grounds, in this case suggesting the lack or combination of sexual characteristics as a definition. (Besides, do we even know if the concept of androgyny existed in ancient Egypt?) I think it would have been more appropriate for Stokstad to say that the sculpture may suggest androgyny to the modern viewer. 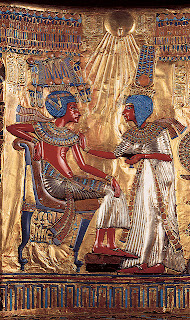 I came across this stunning image of from the back of King Tut’s gold throne (left, c. 1332-1322 BC) tonight.  Isn’t it gorgeous? (Click on the image to enlarge it, if you don’t believe me.)  I love the striking, bold colors.  And I especially love that Tutankhamun is depicted with the lil’ Amarna-style belly that his dad popularized in Egyptian art (see the relief Ahkenaten and His Family, c. 1353-1336 BC, for one another example of the Amarna style).

This throne shows Tutakhamun being anointed with perfume by his wife, Ankhesenamun.  I love the fine details in Ankhesanumun’s robe, and I especially love that you can see the outline of her legs beneath the flowing material.  It gives the impression that the material is very lightweight.  (There is a little more information about this throne here.)

Speaking of King Tut, have you seen the reconstruction of his face?  In 2005, National Geographic reported that scientists used 3-D CT scans to reconstruct the first mummy of the ancient pharaoh.  Kinda cool, but also kinda creepy.  Check out this image of the bust on display at the Field Museum in Chicago – it totally reminds me of the heads that the witch Mombi stored in the “Return to Oz” movie. Yikes!

About a decade ago, when I was sitting in one of my early art history courses, my professor offhandedly mentioned some speculations that Imhotep, the architect of the Stepped Pyramid at Djoser (ca. 2530-2611 BC, shown right), may have been the biblical figure Joseph of Egypt. I have been quite skeptical of this theory for years, largely because none of my art history textbooks allude to any connection between the two historical figures. For years I have meant to research this topic and see what speculations exist, and I decided that today was the day.

After doing an initial search, I discovered that a lot of people speculate that Joseph and Imhotep are the same person. If you’re curious, you can see two less-scholarly sites here and here. I was surprised to see that someone thinks that the stepped pyramid was actually created to store grain (for the biblical famine associated with Joseph). Seriously? I find that incredibly unlikely.

As I suspected, I couldn’t find any reputable scholars discussing such a topic. It also seems unlikely that Imhotep and Joseph are the same person, since the Djoser pyramid predates Joseph’s arrival into Egypt by about 1,000 years. (You can follow some of the theories regarding Joseph’s historical timeline here).

I also learned a few new things about Imhotep during my research. He seemed like a very interesting and intelligent man. In addition to creating the stepped pyramid at Djoser (the shape of which is seen as the precursor to the sleek angles of the Pyramids at Giza), Imhotep was probably the architect for the step-pyramid complex Horus Sekhemkhet at Saqqara.1 By the Late Period (c. 750-332 BC, which is about two thousand years after Imhotep lived), the architect had achieved the status of a god. As a deified being, Imhotep was associated with medical learning and healing. There are many Late (and Greco-Roman) period statues of Imhotep seated and holding a papyrus scroll (you can see an example here).

If anyone can provide some solid, scholarly evidence to support a connection between the Joseph and Imhotep, I’d be interested in reading it. For now, though, I’ve decided that the apparent lack of connection is for the best. It’s quite awkward to sing, “Go, go, go, Imhotep!” anyway.

For several weeks I’ve wanted to reconnect with my ancient art self. Lately I haven’t had many opportunities to think about any art created before c. 1400, which makes me sad. So tonight I sat down with this book that I recently got as a present, and just perused through the first hundred pages or so. This statue of Meritamen, nicknamed White Queen (shown left, c. 1240 BC, Egyptian Museum, Cairo) caught my eye, largely because I thought it was interesting that instead of depicting a nipple, her left breast is decorated with a rosette. I tried to do some research and see if there was any precedent or symbolism for this, but I can’t find anything definitive (although this site suggests that the rosette may be associated with kingship, but that doesn’t make too much sense in this context for a queen, right?).

I think the flower looks too different from a lotus to make any symbolic associations (which is too bad, since the lotus is associated with creation and birth, which could tie into the nurturing function of the breast). It also would have been cool (and also added significance) if this breast-rosette was drawn in the same pattern as the Flower of Life, but unfortunately I don’t much visual similarity.

Thoughts, anyone? Maybe I’m looking to deeply for answers. Perhaps the Egyptian artist just wasn’t good at depicting nipples, and decided to cover up one breast with a goddess statue and depict a rosette on the other? Ha!

Meritamen was the daughter-turned-wife of Ramesses II. There is an inscription on the back pillar of this statue, but the name is missing. This sculpture wasn’t determined as a depiction of Meritamen until after 1981, when a colossal statue of Meritamen was discovered at Akhmim. This colossal statue has similar inscriptions to the Egyptian Museum statue, which solidified the attribution. You’ll notice, though, that the Ahkmim statue does not have similar rosettes on her breasts. Hmm… 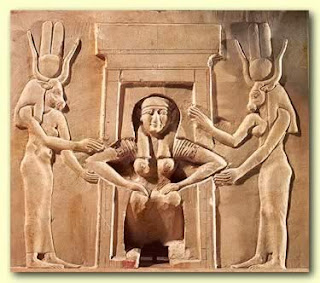