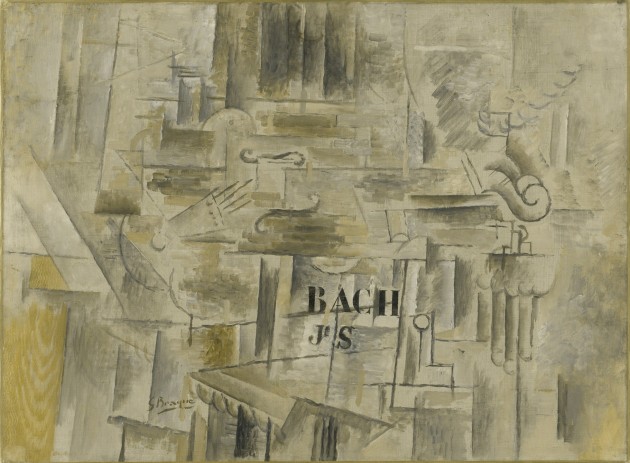 Last week one of my students selected to write about Georges Braque’s “Homage to J. S. Bach” for their weekly assignment. I think that this painting is clever in several different ways, including how the signature of Braque seems to also be a witty reference to the similarity between the artist’s last name and the last name of the famous Baroque composer.

Braque includes musical instrument or references to music ins several of his paintings, and he himself was a gifted musician who played the violin, flute and accordion. So it is unsurprising that he would create an homage to one of the greatest Western composers, who happened to be a personal favorite of Braque. And I think that Bach’s polyphonic musical compositions, which present dominant musical motifs at through different layers of instruments and voices, parallels that way that Cubist paintings present the same objects through a variety of fragmented perspectives. The various inventions of Bach also parallel how Braque sought to create variations of similar subjects throughout his career. The Philips Collection blog has a post, “From Bach to Braque,” which takes the analysis even further by pointing out that weaving together of voices in a Bach fugue gives a sense of structure, line, and architecture in Braque’s painting.

According to the MoMA website, Braque “thought musical instruments added a tactile dimension to the visual image: ‘The distinctive feature of the musical instrument as an object, he said, ‘is that it comes alive to the touch.'” Perhaps, as a painter, he felt a disconnect with his paintings because he didn’t physically touch them in the creation process, since he used a paint brush. In that way, music could bridge the gap of physicality. And I think that the musical subject matter adds an extra layer of experience that goes beyond the spatial explorations of Cubism, by adding visualization of the aural experience of listening to music.