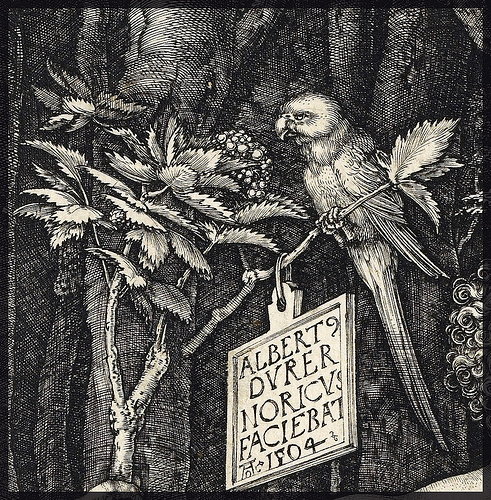 Albrecht Dürer, detail of parrot from “Adam and Eve,” 1504. Engraving

Last week, while driving to work, I was thinking about Dürer’s engraving Adam and Eve, which includes a parrot in the upper left quadrant of the print. In this particular context, the parrot functions as a symbol for the Virgin Mary. The symbolic association might seem like a stretch today, but the belief was that the parrot was similar to Mary. Both the parrot and the Virgin were associated with typically-improbable situations: if a parrot can be taught to speak, then a virgin can become pregnant and give birth! Additionally, there are connections between parrots and Mary’s purity and virginity, which are explained in more detail elsewhere. Here are a couple of my favorite representations of the Virgin with parrots: 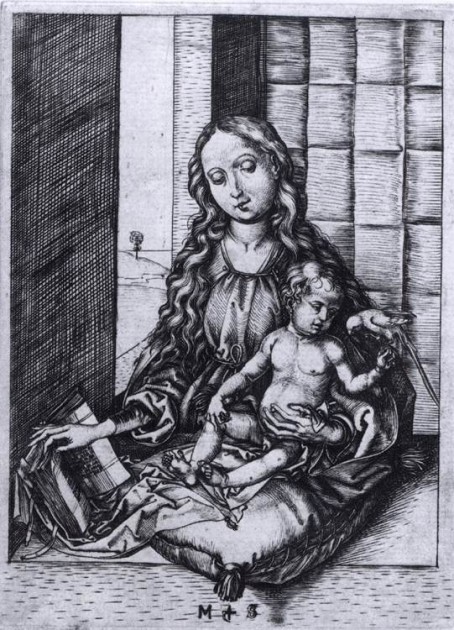 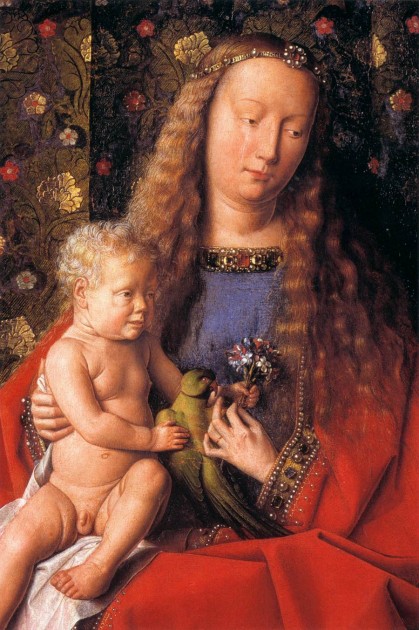 I think that the association with the Virgin and parrots is one reason why there are so many paintings of women and parrots in comparatively recent centuries. Parrots typically don’t appear with men in art (perhaps because pirates didn’t commission their own portraits? Ha ha!). However, I do know of one example of a man depicted with parrots: 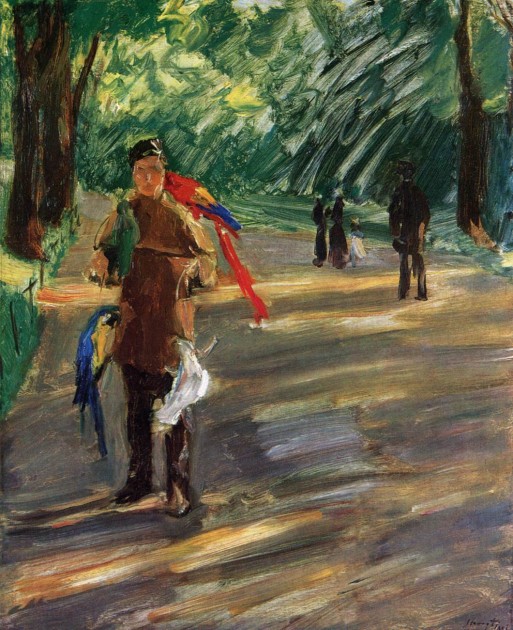 Typically, though, in art parrots are usually depicted with women, or appear in a still-life painting, or in some type of naturalist or scientific drawing. Why is this? The scientific examples are easily explained, since parrots are non-European and therefore served as an example worthy of study. In addition, parrots could be studied by artists in relation to their anatomy and color. Such was the case with Van Gogh, who studied the anatomy of a stuffed parrot when he created The Green Parrot: 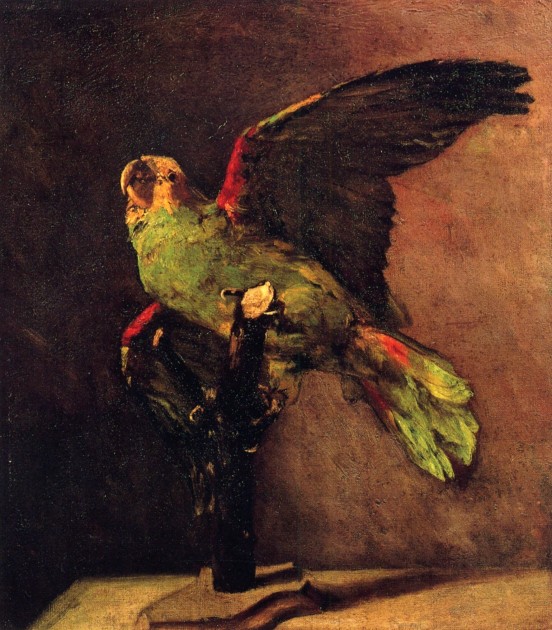 Here is one example of a parrot in a still-life painting, although there are several others by this same artist Georg Flegel (see Still Life with Pygmy Parrot and Dessert Still Life): 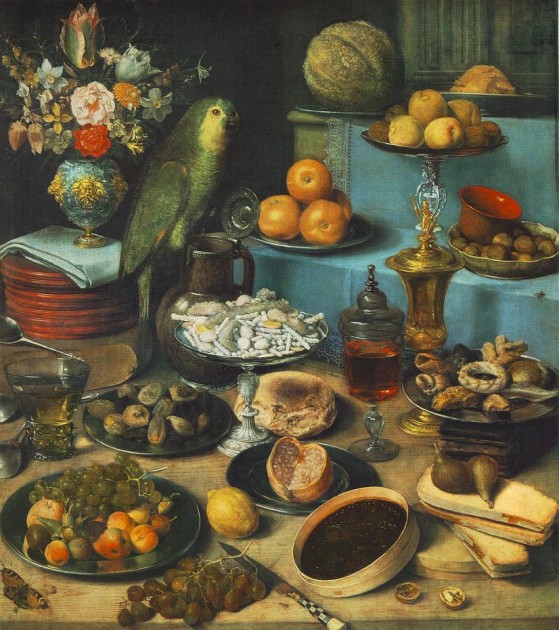 I think that the inclusion of parrots with still-life paintings is interesting, because it connect parrots to the material world, wealth, and trade. As an exotic creature from non-European lands, parrots were highly prized during the colonial period. And it wasn’t just the live birds that were valued: in the colonial era the plucked feathers of parrots were valued too. In Mexico, the indigenous practice of feather painting was combined with European pictorial conventions (see below). This type of feather painting was highly prized by the Europeans, which adds to how parrots were connected with material value. 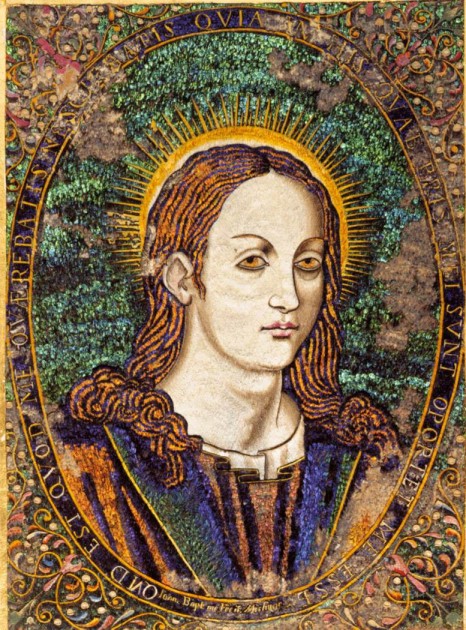 Jaun Bautista Cuiris, “Portrait of Christ Made of Humming Bird and Parrot Feathers,” 1550-80.

Beyond these examples, there are lots of representations of women with parrots. In this context, I think there is more symbolic and visual meaning at play than a mere historical connection to traditional representations of the Virgin. For example, as late as the 17th century, a connection between women and caged birds was made in moralizing paintings suggesting seduction (such as Couple with Parrot (1668) by Pieter de Hooch.) Also, the brightly-colored and and textural plumage of parrots are very decorative, and this is a key thing to remember in relation to representations of women. As a result, parrots complement decorative elements within a work of art, and give an added sense to materiality to such paintings which are dedicated to showing pretty objects. The inclusion of the parrot hints that the other objects in the painting (whether a female figure or fancy tableware in a still life, for example), are especially meant-to-be-looked-at by the viewer.

The depiction of a parrot with a woman hints that the woman is also decorative, like the parrot, and perhaps is even exotic. I think that there might even be a correlation with the softness of the bird’s plumage and the implied softness of the female skin, especially with nude/semi-nude paintings like Delacroix’s Woman with a Parrot and Tiepolo’s Woman with a Parrot. Even the more muted of paintings that completely cover the female body still hint at an element of decoration and texture, especially with the silky intimate dressing gown that is worn by Manet’s model in this painting:1

It seems to me that the usage of parrots in art took a vast turn from their symbolic connection to Mary (stressing the miraculous nature of the virgin birth!) to the tangible, decorative, and perhaps even frivolous associations with parrots in later art. What do you think? Do you know of any other genres or scenarios in which parrots appear in art?

1 Recent scholars have interpreted Manet’s painting as an allegory for the five senses. In this context, the parrot (as a confidant) may represent hearing. For more information see: http://www.metmuseum.org/toah/works-of-art/89.21.3/