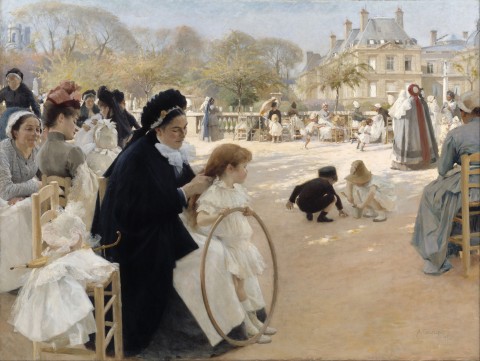 Over the past couple of days I have been obsessing over paintings by the Swedish-speaking Finnish artist Albert Edelfelt. I am drawn to several of his portraits and outdoor scenes, such as Idyll (1878), Good Friends (Portrait of the Artist’s Sister Bertha Edelfelt) (1881), Chez L’Artiste (Les Graveurs) (1881), and The Luxumbourg Gardens, Paris (1887, shown above). The painterly style and/or plein air subject matter remind me a little of French Realism and Impressionism, so I wasn’t surprised to learn in the artist’s biography that the artist lived in Paris for over fifteen years.

However, I was surprised to learn recently, given the more avant-garde tendencies of Edelfelt’s art, that the artist studied under the academic painter Jean-Léon Gerome. It wasn’t until I did a little bit more research that I discovered that Edelfelt originally wanted to establish himself as a history painter! He started painting in this traditional vein by drawing inspiration from historical subjects that were written by the Finnish historical novelist Zacharias Topelius. Edelfelt’s first history painting, Queen Bianca (also called Queen Blanca, 1887, see below), was accepted into the Paris 1877 Salon. Although the medieval Queen Bianca was Swedish, this canvas is considered first major history painting to depict a Finnish historical subject, since Finland once belonged to Sweden.1 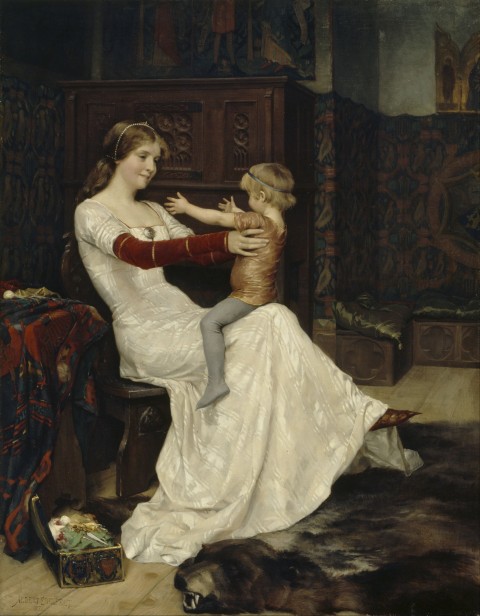 This painting depicts Queen Bianca bouncing her son Haakon on her knee, while singing to him at the same time. Although I really like this darling subject matter, I’m also drawn to this painting because there is a Swedish children’s song, “Rida, Rida, Ranka” (“Rider, Rider, Rocker”), which is connected to the subject matter of this painting. (Do you know of other songs which have served as direct inspiration for the subject matter of a work of art? Please comment below!) The song discusses a “little knight” and rider (the young prince), who is riding the “horse” Bianca. The song continues by discussing the joy that the boy will one day find through marriage. This song references the marriage that Bianca helped to arrange between Haakon and Princess Margareta of Denmark, a marriage which resulted in the union of Denmark and Sweden between 1397 and 1453.2

I love the interaction between the mother and boy in this image, and I love the healthy curves of the boy’s childish body. Edelfelt has quite sensitive and loving depictions of children and women in many of his paintings (which no doubt aided in the success of this particular painting in the 1877 Salon). The artist didn’t become a father himself until more than ten years after Queen Bianca was painted; his son Erik was born in November of 1888, and was depicted the following year in The Artist’s Son Erik in His Pram).

Are you familiar with Albert Edelfelt’s paintings? Which ones do you like? Do you know of any other works of art which are connected to a children’s song?