Raphael’s Studio, Graffiti, and “Grotesques” at the Vatican

Note: The following post was written in honor of my friend, the late Hasan Niyazi, who was the blogger at Three Pipe Problem. Several times Hasan and I would write posts that were in response to or inspired by something that the other had written. When writing this post, I was reminded that Hasan had already paved the way for my own research: he posted brief information about Raphael and the Vatican Loggia in January 2010 and in April 2012.

Hasan had a particular love for Raphael, and the art history blogging community thought it appropriate to honor Hasan on April 6th, which is Raphael’s birthday. You can find a compilation of links and tributes for this event HERE. Hasan and I enjoyed corresponding about myths and historical misconceptions surrounding art history, and I think he would have appreciated my detective work to determine whether or not Raphael actually left a graffito in the Domus Aurea (especially since Hasan mentioned in a post from January 2010 that he had difficulty finding an image of any inscriptions left by Renaissance artists on the walls – an issue I have tried to remedy here).

On another note, too, I think there are some interesting parallels between Hasan’s written text and the graffiti left by Renaissance artists. Just as these artists left a mark of their physical presence after their discovery and interaction with ancient Roman paintings, Hasan left his own text (a virtual signature) on a wall (a digital screen) after making artistic discoveries of his own.

Over the past several weeks, I have been listening to online lectures on ancient Roman architecture by Prof. Diana E. E. Kleiner of Yale University. Many of these lectures are found through Yale’s Open University website for the course. It has been fun and rewarding to listen to another professor teach about a subject with which I am familiar, although I know that there is always more to learn about the Romans.

I was particularly intrigued by one lecture that discusses some of the paintings that are located in Nero’s Domus Aurea (“Golden House”). This immense pleasure palace was never completed during the Roman period; it was left incomplete after the unpopular Nero was forced to commit suicide. Some sections of the palace and grounds were torn down afterward, while others were sealed and used as a foundation for the Forum of Trajan. These private apartments and other rooms were discovered during the Renaissance around 1480, when a man accidentally fell into one of the underground rooms.1

Due to their subterranean location, these rooms were called “grottoes,” and the decoration on the walls subsequently was called “grotesque.” (Later, the word “grotesque” took on other connotations.) Renaissance artists were stunned at this discovery, for the walls in the rooms were still painted, gilded, and stuccoed. In general, the Roman painting in the Domus Aurea can be interpreted as a transition between the Third Style into the Fourth Style of ancient Roman wall painting. The small fantasy-like vignettes and delicate, whimsical designs placed upon monochromatic backgrounds recall the Third Style, while other walls incorporate more elements from previous styles such as illusionistic vistas (an indication of the eclectic and inclusive Fourth Style, which combines elements from the First, Second, and/or Third Styles). One example of Third Style painting would be the cryptoporticus ceiling (image shown below). Perhaps the best extant example of Fourth Style painting from the Domus Aurea can be found in Room 78, although it should be noted that Renaissance artists did not visit this particular room. 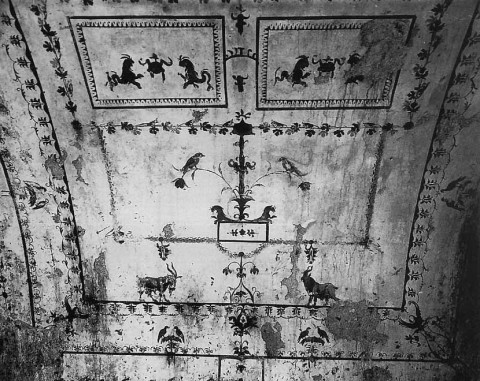 Many Renaissance artists visited these grottoes, and many of them, paradoxically, left graffiti on the walls and defaced the paintings they so much admired. Some of the graffiti left in the Domus Aurea belong to students of Raphael, such as Pierino Fiorentino and Giovanni da Udine.2 Northern artists also visited the grottoes and left their names, including the artist and writer Karl Van Mander.3 Perhaps these artists felt like they could bridge some type of historical divide between them and the revered ancients through such markers.

Although I can find no evidence that Raphael left his own graffito on the walls, Vasari does record that Raphael visited the site with his assistant, Giovanni da Udine.4 The wall paintings definitely left an impression on the two painters. The influence of the walls of the Domus Aurea on the style of Raphael and his pupils are especially clear when viewing Raphael’s paintings in the Vatican Loggia of Pope Leo X as well as the Loggetta and Stufetta of Cardinal Bibbiena (an image of the Loggetta is shown below). Out of these three spaces, the Loggetta and the Stufetta were decorated in the antique style first. The Loggia, however, is probably the best well known and most influential, since it served as the prototype for modern grotesques.5 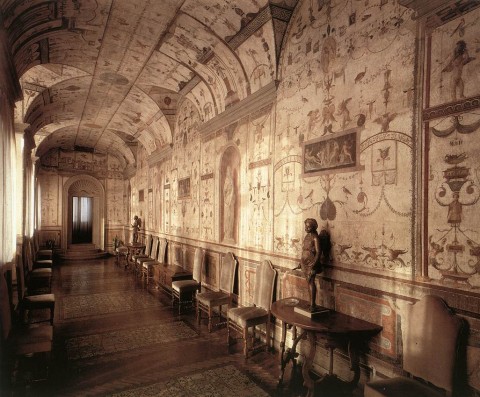 Studio of Raphael (particularly Giovanni da Udine, who was assigned the task by Raphael), The Loggetta of Cardinal Bibbiena, 1516-1516. Image courtesy the Web Gallery of Art 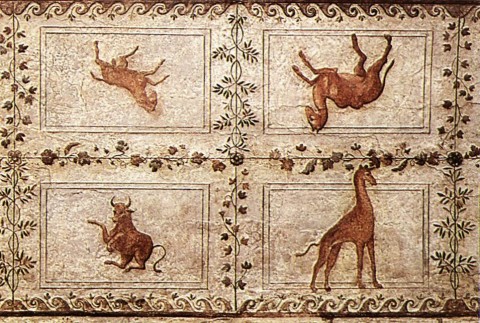 Studio of Raphael, detail of the ceiling of the Loggetta Bibbiena, 1516-1517. Vatican.

Many of these paintings have decorative elements which recall the Third Style of Roman wall painting, such as the monochromatic white background and lyrical vegetal designs. I particularly appreciate the whimsical designs that include animals, and I think that the fantastic and whimsically illogical aspect of the Third Style is shown in many details with animals.6 For example, one detail of a pilaster in the Loggia depicts a fat rat and round squirrels resting on delicate acanthus leaves, while swans perch on spindly tendrils (see image below). 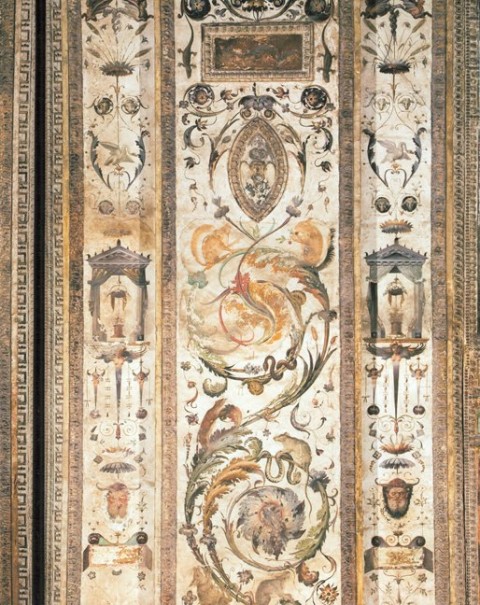 Scholars have debated the contribution which Raphael had in the decoration of these areas. Most recently, Nicole Dacos asserted that Raphael supplied the initial designs and sketches for the Loggia, although none of these sketches survive.7 After this point, studio assistants including Francesco Penni, Giulio Romano, Giovanni da Udine, and Perin del Vaga, and Polidoro da Caravaggio completed the decoration. Raphael is also thought to have provided the designs for the Loggetta and the Stuffetta, although he gave Giovanni da Udine “carte blanche” to paint with assistants in the Loggetta.8

I think it’s really neat to see a way in which Roman wall painting influenced Renaissance painters. During the Renaissance, artists often had to look toward ancient sculpture for artistic inspiration, since sculpture survived much more easily than painting.9 One can only imagine the excitement of Renaissance painters to discover ways in which the ancient Romans worked with color, utilized their imaginations to create fantastic imagery (which would have fit well with the Renaissance concept of ingegno, I think), and also explored modeling and illusionism.

It is unfortunate, then, that these paintings were so well loved that they were “gradually effaced by the grafitti and torch smoke of the very people who came to admire them. So great, indeed, was the prestige of the Domus Aurea paintings that their rapid deterioration gave rise to the story, which persisted into the late eighteenth century, that Michelangelo, Raphael, and other masters had intentionally destroyed the frescoes after copying them, so that no one would be able to identify the source of their great art.”10 Even in recent times, the Domus Aurea still has been under threat from a conservational standpoint: the building has been closed since 2006 due to risk of structural failure and collapse. Luckily, though, it was just announced that the structurally-sound portions of the building will reopen between July and September of this year. How exciting!

Do you know of any other ways in which Renaissance painters were directly influenced by specific Roman paintings? Please share!

4 La Découverte de la Domus Aurea et La Formation des Grotesques a la Renaissance by Nicole Dacos includes an extensive appendix of the graffiti were left in the Domus Aurea during the Renaissance and afterward. An additional list in this appendix includes the list of graffiti that were mentioned in an earlier publication by Weege in 1913, which were no longer visible when Dacos published her book in 1969. Raphael’s signature is not specified in either of these lists. For information on Vasari’s account regarding Raphael’s visit to the site, see chapter on Giovanni da Udine.

5 Nicole Dacos, The Loggia of Raphael: A Vatican Art Treasure (New York: Abbeville Press, 2008), 7. The Loggia is found in the old Papal Palace; it is located on the second story of three superimposed stories. Raphael assumed the project of constructing the third floor and decorating the second floor of the galleries when Bramante, the original architect, died. In the sixteenth century the second story was known as “la loggia,” and the name that specifically refers to the second story has remained.

6 The Roman architect and historian Vitruvius decried the illogical aspects of Third Style painting, writing, “We now have fresco paintings of monstrosities, rather than truthful representations of definite things. For instance, reeds are put in the place of columns, fluted appendages with curly leaves and volutes, instead of pediments, candelabra supporting representations of shrines. . . . How is it possible that a reed should really support a roof, or a candelabrum a pediment with its ornaments, or that such a slender, flexible thing as a stalk should support a figure perched upon it. . . .?” See Vitruvius, De archaetectura VII, 5. Text available online here: http://nlp.perseus.tufts.edu/hopper/text?doc=Vitr.%207.5&lang=original

9 We can tell that ancient sculpture also served as a source of inspiration for the Loggia paintings, in fact. Nicole Dacos points out that a sculpture of Diana (Artemis) of Ephesus appears in one of the paintings of the Loggia, which may have been derived from a statue known at the time of Pope Leo X. Ibid.., 40-45.