Archives and Absorption for the Historian-Spy

Tonight I have been reading an article by Lois Marie Fink about museum archives as scholarly resources. I was particularly struck by her word choice for one particular sentence, in which she explained that she used an archive “to spy on a discussion” found in certain archival records.1

I’ve never considered historians as individuals who spy before, but this word does seem appropriate. Many things in archives are letters or documents that were passed between individuals, without any thought for how the documents would be read by a third party in future generations. In a way, historians are able to “see” into the past without being “seen” by those who have originally wrote the documents, which places the historian in a position of power that is similar to that of a guard in the Panopticon, a 19th century prison. In essence, through this act of seeing without being observed, the historian-spy is empowered through the archive. 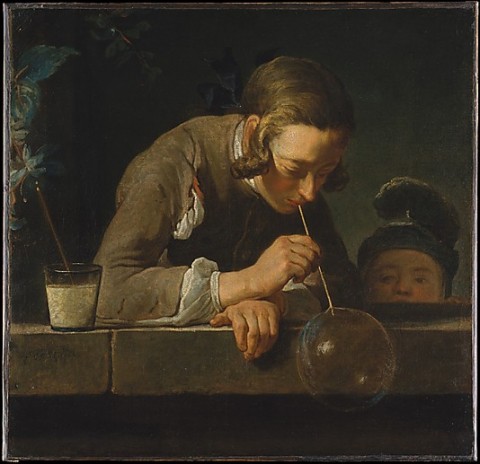 It has occurred to me this evening that archival texts and correspondences contain “absorption” (to use Michael Fried’s term). These texts are written without expressly acknowledging the historian-spy who reads the documents in the archive. Instead, historical writer(s) seem to be singularly involved in the process of recording or exchanging information pertinent to his/her time. This can relate to the 18th century paintings that Fried explored in his seminal book, Absorption and Theatricality: Painting and Beholder in the Age of Diderot. Such paintings, like Chardin’s Soap Bubbles (shown above) are created to give the impression that the viewer does not exist. The subjects do not gaze outward to directly acknowledge the viewer, but are intently involved and absorbed in their own actions (in this case, forming and/or watching a bubble).

For circumstances in which archival records are created expressly for archives, the element of absorption has even more parallels with this kind of 18th century painting. Even though such paintings want to stress the fiction that the viewer does not exist, these paintings also presuppose a viewer through their very existence as painted objects. Likewise, such texts are created with the intention of being seen and utilized as records in the future, but they do not directly address or acknowledge the intended audience.

When I was sharing these ideas with my husband this evening, he mentioned that he thinks paintings are more approachable works when they contain an element of absorption. He personally prefers to not be confronted by subject matter when he approaches a work of art. Instead, he likes paintings which are construed so that one seems to “happen” upon a scene that is taking place. I imagine that a lot of historian-spies feel the same way in the archives. As long as the presence of the historian-spy is not directly acknowledged in the texts themselves, then the historian-spy can truly feel like the information he/she encounters is a singular “discovery” that no one else has seen!