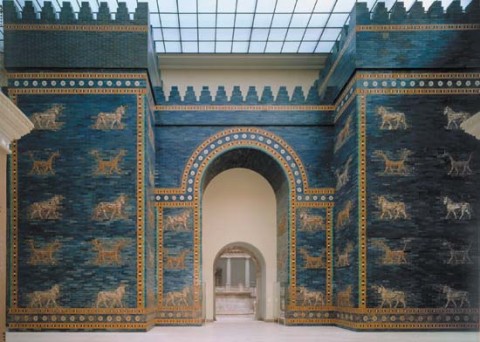 Reconstruction of part of the so-called Ishtar Gate at the Pergamon Museum in Berlin. The original double-gate was built c. 575 BCE. Glazed brick, height of original gate 40' (12.2 m) with towers rising 100' (30.5 m)

A perceptive student asked the other day how we know that the “Ishtar Gate” was really dedicated to the goddess Ishtar. I replied in class, “I believe that the dedication is mentioned on the inscription of the gate.” However, when I pulled up the inscription to show the class, I found that Ishtar was not mentioned at all:

“Nebuchadnezzar, King of Babylon, the faithful prince appointed by the will of Marduk, the highest of princely princes, beloved of Nabu, of prudent counsel, who has learned to embrace wisdom, who fathomed their divine being and reveres their majesty, the untiring governor, who always takes to heart the care of the cult of Esagila and Ezida and is constantly concerned with the well-being of Babylon and Borsippa, the wise, the humble, the caretaker of Esagila and Ezida, the firstborn son of Nabopolassar, the King of Babylon.

Both gate entrances of Imgur-Ellil and Nemetti-Ellil —following the filling of the street from Babylon—had become increasingly lower. Therefore, I pulled down these gates and laid their foundations at the water-table with asphalt and bricks and had them made of bricks with blue stone on which wonderful bulls and dragons were depicted. I covered their roofs by laying majestic cedars length-wise over them. I hung doors of cedar adorned with bronze at all the gate openings. I placed wild bulls and ferocious dragons in the gateways and thus adorned them with luxurious splendor so that people might gaze on them in wonder.

I let the temple of Esiskursiskur (the highest festival house of Markduk, the Lord of the Gods—a place of joy and celebration for the major and minor gods) be built firm like a mountain in the precinct of Babylon of asphalt and fired bricks.”1

This student’s question has sent me on a wild goose chase. After writing a previous version of this post, explaining my frustration in trying to find a contemporary inscription or dedicatory text, David Byron from Baroque Potion sent me a source with some contemporary texts (see first comment below). This publication by A. R. George mentions an inscription on the gate that was excavated in situ. Either this is a second inscription on the gate that is different from the aforementioned one in this post, or it is another part of the aforementioned inscription which doesn’t appear in many English translations:

“I Nebuchadnezzar, king of Babylon,…, son of Nabopolassar, king of Babylon, skillfully rebuilt the Istar Gate with pure lapis-glazed bricks for my lord Marduk. I stationed at its sills fierce bulls of copper and frenzied dragons.”

Other contemporary inscriptions and documents are highlighted by George, which refer to the “Ishtar Gate” and its construction.2 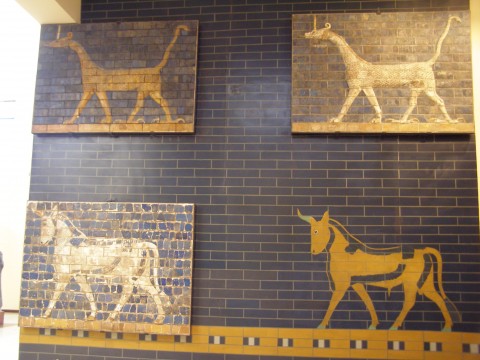 Fragments of the so-called Ishtar Gate with reconstructions, from the Archaeological Museum in Istanbul

Without this inscription or other contemporary inscriptions calling this structure the “Ishtar Gate,” I can see why one would wonder how this gate was associated with Ishtar. After, all the symbol of the lion, which is associated with Ishtar, lines the so-called “Processional Way” which leads up to the gate, but is not found on the gate itself. Instead, the gate is covered with symbols of the god Marduk (the patron god of Babylon) and the god Adad (the storm god). The bull with blue horns and blue tails was associated with Adad. The dragon-like creature (with the head and body of a snake, the forelegs of a lion, and the hind legs of a bird of prey) were sacred to Marduk. 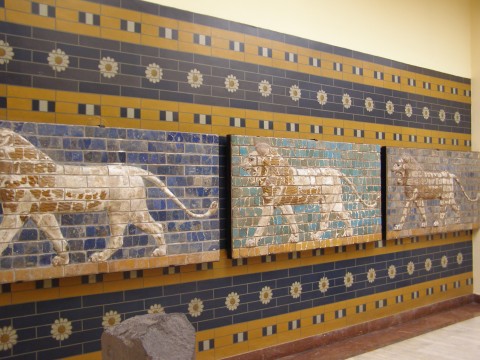 Fragments of lions from the so-called "Processional Way" leading up to the "Ishtar Gate." Fragments and reconstruction found at the Archaeological Museum in Istanbul

The lion motif in the so-called “Processional Way” helps to indicate that Ishtar was supposed to be honored and celebrated, however. After all, during this Neo-Babylonian period (which, after twelve centuries brought splendor back to Babylon during this period in the ancient Near East), it would make sense that Ishtar, the fertility goddess of rejuvenation, would be honored. During this time, Babylon itself was revived and rejuvenated. Additionally, A. R. George notes that “the ceremonial name of the Istar Gate reflects the character of Ishtar as a goddess of battle.”2 With the Medes’ relatively recent defeat of the Assyrians and capture of Nineveh in 612 BC (which established the Neo-Babylonian empire), it makes sense that Ishtar would also be recognized in this role.

Does anyone know more information about the history of this gate? Given this second inscription that David Byron shared with me, I’m curious as to whether anyone has confirmed through analysis that the gate is actually glazed with lapis lazuli. I have read elsewhere that lapis lazuli would have been too expensive of a medium to be used on such a monumental structure. Should we take Nebuchadnezzar II’s inscription at face value? Perhaps this king wanted to give a greater impression of his wealth and prestige by claiming that the bricks were glazed with lapis lazuli?

1 This inscription can be found multiple places online, but I found this translation HERE. It is interesting to note that Nebuchadnezzar II’s inscription states that the gate was made with “stone.” This isn’t quite true: it is made out of glazed brick. However, Nebuchadnezzar II does claim in the second inscription in this post that these bricks were glazed with lapis lazuli. I haven’t come across any analysis to confirm that the bricks are actually glazed with lapis lazuli.

2 A. R. George, Babylonian Topographical Texts, Orientalia Lovaniensia Analecta series, Louvain, Peeters Press, 1992, 339-441. Citation available online HERE.Based on this inscription, it seems like it would be more appropriate to say that the Ishtar Gate was dedicated to Marduk, not necessarily Ishtar.