Edouard Manet, "The Monet Family in Their Garden at Argenteuil," 1874

This is my new favorite work of art by Manet: The Monet Family in their Garden at Argenteuil (1874). On one hand, it reminds me a bit of my own little family and home: my currently-bearded husband, my little boy, my flower garden, my yard. Plus, when learning more about this painting on the Metropolitan Museum of Art website, I grew to like Manet even more than I already do. In 1924, Monet wrote about his experience of sitting in his garden for this very portrait:

“Manet, enthralled by the color and the light, undertook an outdoor painting of figures under trees. During the sitting, Renoir arrived. . . . He asked me for palette, brush and canvas, and there he was, painting away alongside Manet. The latter was watching him out of the corner of his eye. . . . Then he made a face, passed discreetly near me, and whispered in my ear about Renoir: ‘He has no talent, that boy! Since you are his friend, tell him to give up painting!'”

I don’t really care for Renoir’s art, and it turns out that Manet felt the same way. I have a feeling that Manet and I would have gotten along!

Yesterday I was introduced to Manet’s portrait of the Monet family through a film screening of the exhibition, Manet Portraying Life. This show is currently on display at the Royal Academy of Arts in London. This film screening was informative and entertaining. I especially liked the analysis of the paintings given by various individuals who were invited onto the set, including curators, artists and even an actress, Fiona Shaw. The host Tim Marlow and Shaw had a really interesting conversation; they discussed how Manet’s The Railway (shown below) seems to include an interesting pattern – almost a barrier – created by the iron bars. These bars seem to separate these delicate females (and the viewer) from the industrial world of the railway. Even the smoke coming from the railway area seems to add an element of mystery (or perhaps inaccessibility) to modern life. 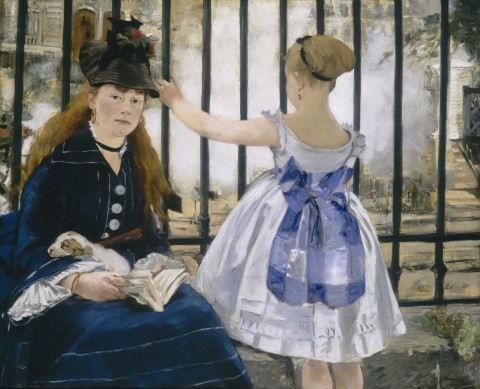 There were several little snippets of information that I learned during this film screening. Here were a few other short points that stood out to me: 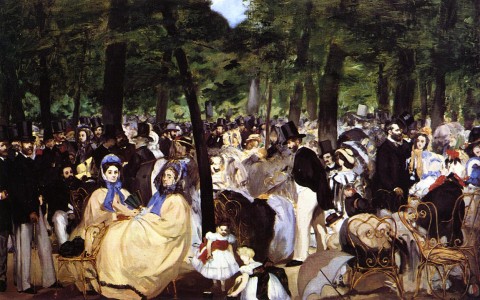 I also enjoyed that the film included some of the background information about Manet’s life and/or the history behind the paintings themselves. I appreciated a discussion of Baudelaire’s “Painter of Modern Life” idea in conjunction with Music in the Tuileries Gardens. The film host emphasized that Manet is shown as a flâneur in this painting: he is depicted in the left corner, an observer of modern life who is separated from the crowd. Another commentator in the film also jokingly noted that Manet has decided to depict different prominent critics and writers in the painting: those who might have written and commented on Manet’s art found themselves within the crowd!

I also learned that this painting alternates between spending six years in the National Gallery in London, and then six years in The Hugh Lane gallery in Dublin. This arrangement is due to a bequest that was contested: when Hugh Lane suddenly died in 1915, his official will stipulated that the painting would go to the National Gallery, but an unofficial addendum to the will (found in his desk) said that the paintings should be in Dublin. The six-year arrangement is a balance between following the legal will and honoring the wishes of the deceased donor.

I was hoping that the film camera would move through the different galleries so one could get a feel for the hanging and the layout of the exhibition space, but that didn’t really happen too much. Instead, the film mostly examined isolated works of art. Only some of the paintings in the show were discussed or even shown, which has led me to look for additional information and interviews about the show elsewhere online. That being said, I still really enjoyed the film; I hope to attend the future screenings this year (on exhibitions about Munch and Vermeer).

Did anyone else go to this film screening or see this exhibition (either at the Royal Academy of Arts or at the Toledo Museum of Art)? What were your thoughts?