The Farnese Hercules and Renaissance “Substitutions” 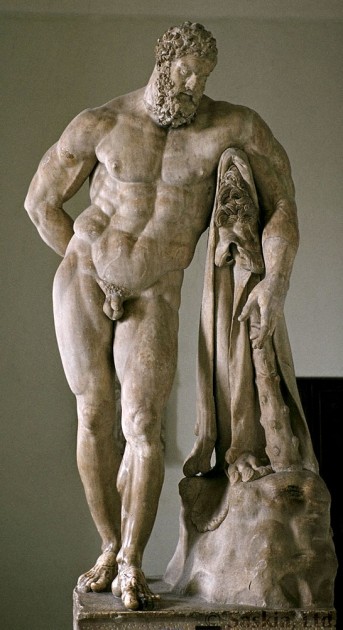 This past week my research meandered into Roman art and the Farnese Hercules. This Roman statue was excavated in various pieces from the Baths of Caracalla during the Renaissance period, in 1546. The legs, however, weren’t found during the early excavations. Before the original legs were discovered, the Renaissance sculptor Guglielmo della Porta provided other legs for the piece. And although the original legs were found not long after, della Porta’s legs were still kept with the statue until 1787, when the originals were finally put into place!1 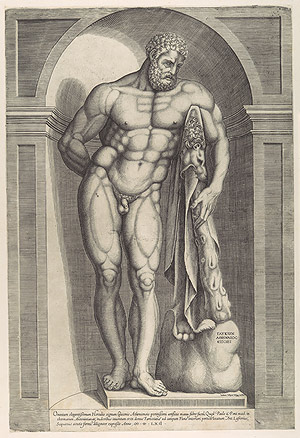 After the original legs were finally reunited with the sculpture in 1787, Goethe recorded that he saw the Farnese Hercules in his Italian Journey (1786-1788, German: Italienische Reise). Goethe criticized della Porta’s “substitute” legs, and felt that the installation of the original legs made the sculpture “one of the most perfect works of antiquity.”3

Of course, the Farnese Hercules isn’t the only piece of classical art which was “restored” during the Renaissance period. Although it seems like della Porta’s legs functioned as an adequate substitute for many, I’ll admit that there are other Renaissance “restorations” which seem a bit awkward to me. Perhaps I’m just used to the missing limbs of the “Apollo Belvedere,” but I think that the Renaissance additions on this statue aren’t completely graceful, especially Apollo’s hands and fingers. 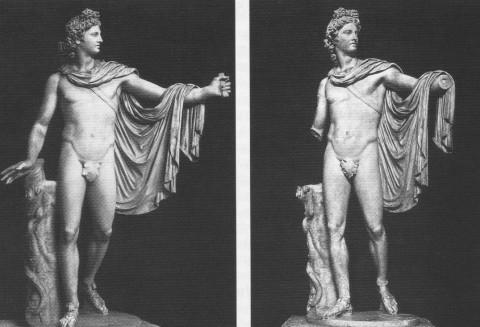 Left: "Apollo Belvedere" (2nd century AD) as restored in the 1530s. The left hand, right forearm, and fig leaf were added at the request of Pope Paul IV. Right: "Apollo Belvedere" as restored after WWII. The Renaissance additions were removed, with the exception of the fig leaf. Today, the fig leaf has been removed, but it appears that the Vatican currently displays a restored version of the statue that is similar to the Renaissance restoration. If anyone has information on when this most recent restoration took place, I would love to know!

When considering the post-WWII restoration of the “Apollo Belvedere” (in which the Renaissance additions were removed), Jas Elsner wrote that “whether the modern concern to return such marbles to their ‘authentic’ form constitutes an improvement is, and will remain, a moot point.”4 I’m up for discussion, and I’d like to see what people think about “improvements” and “authenticity.” Do you have any thoughts on the substitutions and “restorations” of Greco-Roman sculpture that took place during the Renaissance? Is it better to only leave original material on these works of art? Should we make conclusions about later “restorations” on a sculpture-to-sculpture basis, depending on the nature and quality of the addition/substitution? (And if so, does that mean that we value aesthetics and our opinion of quality more than original history?)

I feel like these are tough questions for me; I fluctuate between both camps. I am a sucker for original context and original works of art, but I do think that sometimes a substitution can help to recreate the original context in some form. If della Porta didn’t create substitute legs for the Farnese Hercules, the monumental height and overwhelming effect of that sculpture would have been lost (until, of course, the original legs were found). On the other hand, I also think it’s important to realize that the works of art have their own history, even beyond the period in which they were created. Sometimes I like having a visual reminder that specific works of art held importance during the Renaissance.