Hillwood Estate: Self-Portrait of an Heiress 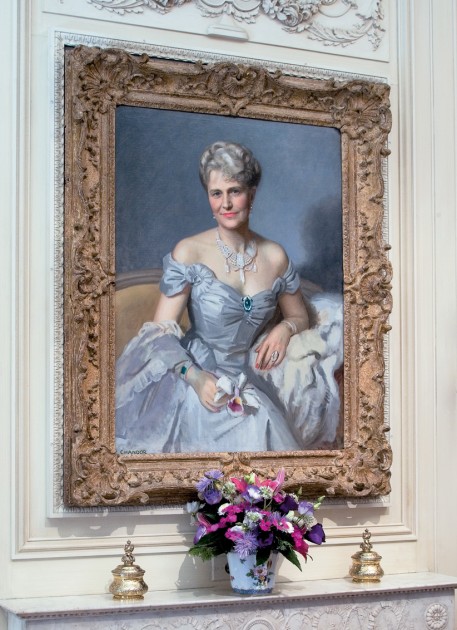 How I’ve missed blogging over this past month! These past several weeks have been some of the most hectic that I have experienced in a long time. I don’t even have a Halloween-themed post for today (you can look at my Rubens and Goya posts from previous Halloweens). Instead, I want to share some thoughts on something completely different: a female collector who was interested in frothy, powderpuff, sumptuous decorative arts that are often called “feminine.” (And hey, I know that a few of you may find this art to be just as frightening and off-putting as a ghoulish work by Goya!)

Marjorie Merriweather Post was an art collector in the mid-20th century. In 1955, Post purchased the estate Hillwood in Washington, DC to house her large art collection. Hillwood is one of the “collection museums” that I listed in an earlier post. The museum has a short introduction film on their website which is as fabulous as the tag line for the museum: Where Fabulous Lives.

Early in life, at the young age of twenty-seven, Marjorie Merriweather Post became the heiress of the Postum Cereal Company (later known as General Foods Corporation) in 1914. Many biographers have commented on how Post was thrust into a “man’s world” of industry and business at a very early age.1 Several years after inheriting the family company, Post began to acquire furniture and decorative art with the help of art dealer Joseph Duveen. Interestingly, Post developed a keen interest in art during the same period in which she pushed for her business to merge with Birdeye Frozen Foods. Post’s art collection and museum can be interpreted as a self-portrait of Post, visually emphasizing her approachability, gender and femininity in order to draw a contrast with her perceived “masculine” pursuits in business. 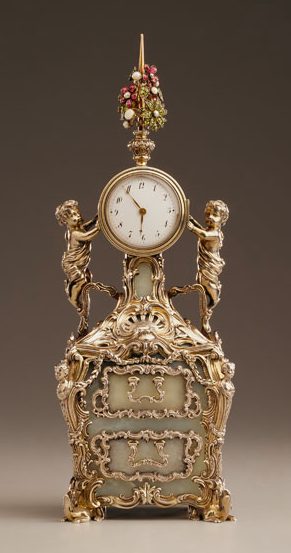 The works that Marjorie Merriweather Post collected seem eclectic and even disparate at first glance: she was interested in French decorative arts from the 18th and 19th centuries, porcelain, jewelry, objects from imperial Russia, Farbergé, costumes, and even Native American art. However, when analyzing Post’s collection, one can see the majority the collection requires the viewer to interact with the objects in a similar way. Many of the items in Post’s collection are created on a small-scale, which require the viewer to examine the finely detailed objects at an extremely close distance. It has been commented that Post was considered to be intimidating and off-putting to many people, because she gave the impression of “being very grand.”2 In one sense, Post’s art collection reflects and even extends this idea of grandeur, since the objects are very fine, luxurious, and extremely expensive. However, Post’s collection of small, dainty objects also presupposes an environment of familiarity, approachability, and even intimacy. In turn, one can assume that Post wanted to have these characteristics extended to her own persona. Post wanted her objects to be seen up close, and perhaps used these smaller objects to creatively assert that she, as an individual, was also approachable. 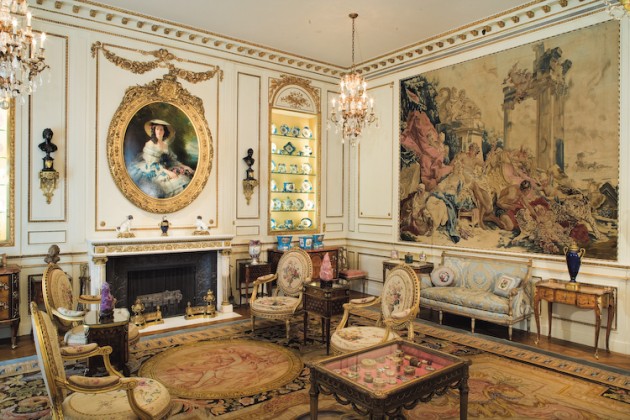 The interior decoration and collective effect of the display contribute to the sense of femininity at Hillwood Estate. Such femininity is particularly manifest in the French Drawing Room, which is designed to “evoke the splendor of the French aristocratic life from the 18th century.” Such objects, particularly those from the Rococo period of 18th century France, historically have been considered “feminine” in nature. Art historian Melissa Hyde has stated, “During the second half of the eighteenth century, the rococo qualities exemplified by the work of [the artist] Boucher – grace, plenitude, emphasis on the seductions of color…came to be identified exclusively with the feminine.” Post includes a tapestry by Boucher in her drawing room, which compliments the flowery objects and lyrical decorative lines that suggest plenitude and grace. Such femininity can be seen in the rugs, chairs, and even the gilded molding of garlands on the wall. It is this particular room at Hillwood Estate that is decorated with many of the objects that Marjorie collected in the 1920s, the period in which she rallied to have her business merge with Birdseye Frozen Foods.

This post isn’t long enough to give a sense of the rich, luxurious quality or the expansiveness of Post’s collection- it’s quite amazing. There are many other ways that the collection and estate relate to gender, femininity, and domesticity too (I didn’t even get to the estate gardens!). Has anyone visited Hillwood Estate? What was your impression of the place?

1 For one example, see interview with Ellen Charles, granddaughter of Marjorie Merriweather Post (Hillwood introduction film at 3:39). Available at: http://www.hillwoodmuseum.org/welcome.html